Accessibility links
Warpaint On 'World Cafe: Next' : World Cafe The all-female quartet from Los Angeles has quickly gained popularity by mixing dreamlike sequences of psychedelia, post-punk and funk. The group's debut full-length follows in the wake of the deafening buzz created by the 2008 EP Exquisite Corpse.

Warpaint On 'World Cafe: Next' 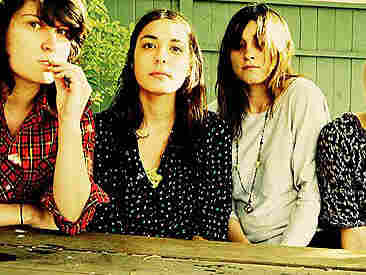 With a musical style that playfully courts dreamlike sequences of psychedelia, post-punk and funk, Warpaint has become a band of the moment. The all-female quartet from Los Angeles has been around since 2004, but it wasn't until it released its debut EP in 2008, Exquisite Corpse, that it became a local sensation. After jumping to No. 1 at the formidable Amoeba Reords local artist chart in L.A., Warpaint was picked up by Manimal Vinyl, who reissued the EP. After enlisting John Frusciante of the Red Hot Chili Peppers to mix the EP, the band's already growing buzz became massive. Throughout 2009, the women were picked up to tour the states with School of Seven Bells, Band of Horses, Yeasayer and more recently, The XX and Beach Fossils.

Warpaint's debut LP, The Fool, came out on Rough Trade Records on October. Much like its predecessor, it contains streaks of experimental funk, punk and electro pop instrumentals glazed in a hazy wash of vocals. The careful songwriting and arranging is matched by a strange intimacy, making The Fool a general pleaser and Warpaint a band to keep an eye on.