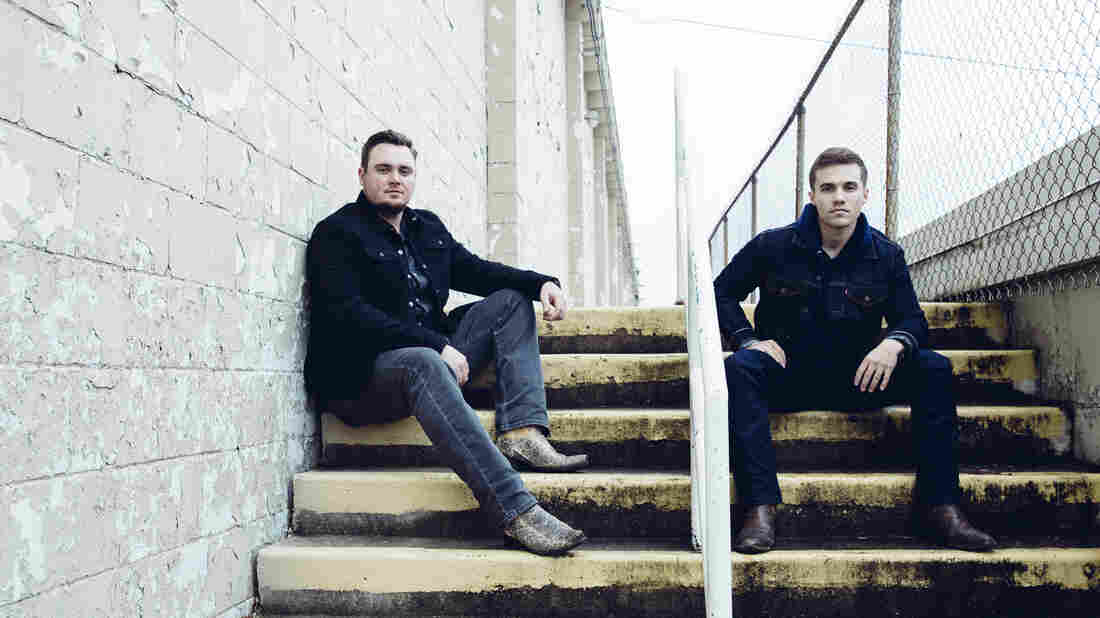 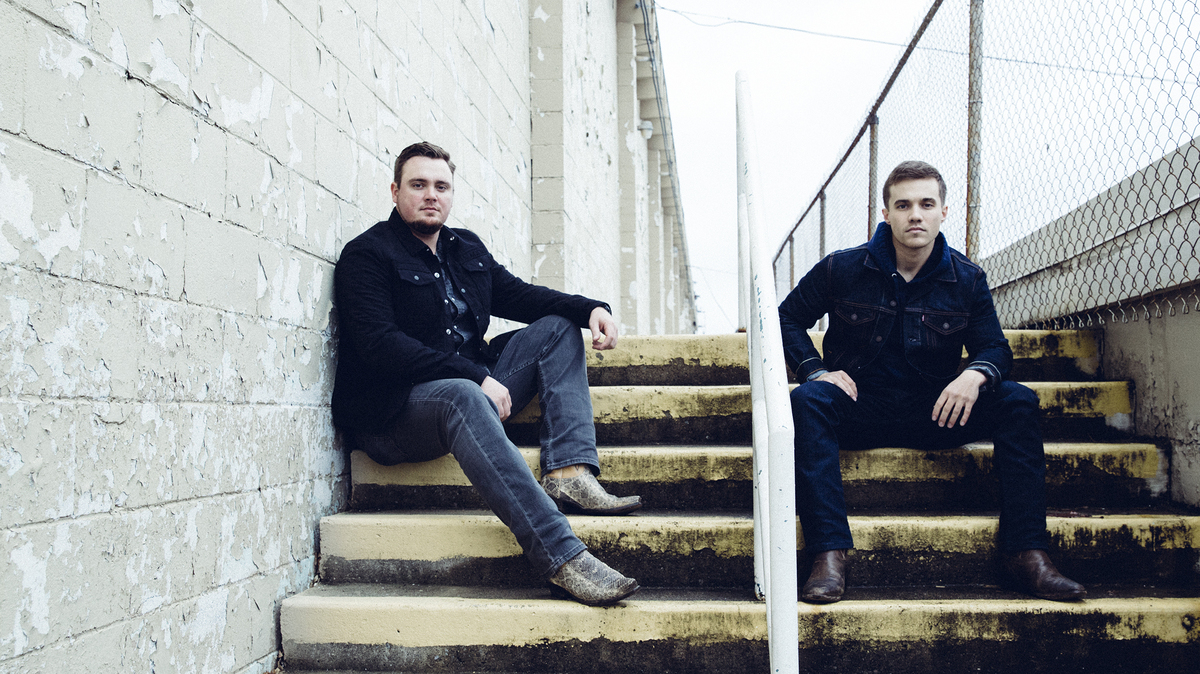 There's a persistent perception among those who keep their distance from the country-music mainstream that the genre merely toggles between mindless revelry and saccharine sentimentality. But it would be difficult to pin either description on the songs of Muscadine Bloodline, an Alabama-bred duo whose take on down-home narratives and fist-pumping anthems alike is edged in angsty, masculine sensitivity. That, along with inflamed harmonies and blistering riffs, betrays the emo and mall-punk reference points that sit alongside lead singer and rhythm guitarist Charlie Muncaster and lead guitarist and singer Gary Stanton's other influences, from Southern rock to leathery singer-songwriters who fall squarely within country tradition.

The duo had to skip Nashville's CMA Music Fest last year. Even the prospect of winning over a fraction of a crowd of fans hundreds of thousands strong couldn't take priority over road gigs. "The reason why we didn't do it last year is because we had bills to pay," Stanton chuckles, "and we had to go play some college bars to make a couple hundred bucks so we could eat." This time around, they took a Chevy-sponsored stage in a park lined by food trucks and porta-johns and bordered by the Country Music Hall of Fame and Museum at 10:30 in the morning, and managed to persuade their audience to join in on songs from the two EPs they've released to date.

A few days before that, Stanton and Muncaster called in from a tour stop to talk about how they're trying to distinguish themselves in the current country landscape.

You walked such parallel paths before you even really knew each other, each growing up in Mobile, Ala., and starting to play the college bar and frat party circuit when you got to college. How seriously did you take each other when your paths finally crossed?

Gary Stanton: That first show when I met Charlie, he opened the show with a cover by Blackberry Smoke, and I was unfamiliar with the band and I thought it was a Charlie Muncaster original at first. I was like, "Holy crap. This dude is incredible." Then I found out it was a cover, so I was like, "Oh, he can just sing really well." [Laughter.] Charlie, I guess he had a head start on me. ... He probably had a two and a half, maybe even three years of actual performance [experience], and I was more the "write songs in my dorm room" [type].

Gary, I read that you came to country late, after singing in hardcore bands. You mentioned singing in your dorm room, and I found a five-year-old YouTube video of you covering the Jamey Johnson song "In Color". How did rugged country like his serve as a bridge for you?

Stanton: I listened to everything under the sun. I loved rap music. I loved hardcore music. I loved pop music. ... Mainstream country just totally missed me. I guess really what happened was I started sitting down and trying to write songs and started seeing the vivid pictures of a guy like Jamey Johnson. The songs he sings have such vivid imagery, things that I could see, being from the rural South. It really just grew on me. ... The reason I really started delving into country more is because of playing cover sets at the bar. Country went over really well. I wanted to get paid, so I started learning the top 40 and the oldies that everyone loved.

You were both especially drawn to country artists who were singer-songwriters. How did you map a course from playing covers in bars to doing your own material?

Muncaster: I played cover songs for years, and I just hit a point in my career where I wanted something more out of it. So Gary and I started writing songs, and I put out an EP. I just noticed that things started happening when you put out original music more than cover music. When Gary and I started working together, it just kinda happened. It's wild to tell the story, because it's not that great of a story. [Laughs.]

Up until now, you've been playing a lot of opening slots, like on Luke Combs' tour, and your sets have often been mostly acoustic. But there's a big difference in energy between a singer alone onstage with an acoustic guitar and a duo. What else does working together do for you?

Stanton: Number one, the workload is split. With our team, we work at a really [fast] pace. ... Charlie, he has strong suits that I don't have, and I have strong suits that he doesn't have. We just kind of try to stay out of each other's lane. There's a lot of stuff on the show side and touring that Charlie knows more [about] than I do. He kind of plays tour manager. I'm more the songwriter and the producer, and he kind of lets me do that. You've gotta set your egos aside. ... At the end of the day, apparently what we're doing together was way more than what we've been doing for the past five years. There's something going on that's right here.

You do have something to compare it to, since you each tried the solo thing.

Muncaster: It's kind of funny to look at what we did solo and then what we've done together.

Country artists have been incorporating rock influences for decades: classic rock, Southern rock, hair metal. But it seems to me that you guys are incorporating more recent styles of rock on your recordings. I hear traces of emo and pop-punk here and there, like your impassioned, penetrating vocal attack during the second verse of "WD-40" and the thrashy guitar and drum turnaround in "Depending On The Night." Tell me about your angle on incorporating rock influences.

Muncaster: Gary and I have very similar music tastes. Gary, being the producer mind that he is and having the rock-ish background that he has — our combination of whatever it is you want to call it is what makes us uniquely us. I wouldn't say that we go into the studio trying to sneak in something different. We're just going in there and being honest with ourselves. That's how we come up with what we come up with.

Stanton: You can hear those influences of punk-rock and that kind of stuff. I feel like it's a subliminal sense of nostalgia people kinda hear, because it almost sounds like some Blink-182 or Lit or that kind of stuff, stuff from the early 2000s that people hear. It really affects the live shows. ... They say our melodies are kinda '90s country with alternative-rock guitar riffs behind it, or something like that. I'll take that any day. If no one's doing what we're doing and people are digging it, I take that as a compliment. But like Charlie said, we don't go into the studio asking, "How can we make this something?" We just go with our guts. We go with what we feel would be cool.

In other interviews, you've talked about taking a stance against country party songs, which is kind of interesting given that you've had to play a lot of parties to get where you are.

What is it that you're trying to avoid?

Muncaster: We're not taking a [jab] at those kinds of country songs. Those songs are a blast. It's just we just feel like it's been done. We like to choose the route of a little bit more vivid imagery and trying to take an angle at a topic that hasn't been explored before.

Stanton: First and foremost, Charlie and I are songwriters. We love a good song with meat on the bones. I'll say this: There's a lot of songs on the radio right now that you could put 20 different artists' vocals on them and it could be their single. ... We really want to have our own sound. A lot of times, we'll finish a new song or a demo and ask ourselves, "Could you hear anybody else cutting that right now?" If the answer is, "Yeah, I could hear a lot of people cutting that," it's like, "Maybe we should just pitch this song to somebody else." It's not that we think we're above what everybody else is doing — it's just that we wanna do stuff our way.

One of the songs on the new EP stuck out to me. You'd expect a country song about fatherhood to feel sentimental, to idealize that relationship, but "Crickets And Cane Poles" is about being profoundly let down by a dad.

Stanton: We've heard the fishing-with-dad song where it's a jolly good time. We were like, "What if we write this from the perspective of having a pretty negligent father?"

Muncaster: When you really want to speak to your fans, good and bad feelings are both important in songwriting.