Accessibility links
Phish Fans Are Wading In A Red Velvet Sea Of Doughnuts : World Cafe Federal Donuts owner Felicia D'Ambrosio and chef Matt Fein have been busy serving up 13 flavors of doughnuts, one for each of the 13 nights Phish is headlining Madison Square Garden.

Phish Fans Are Wading In A Red Velvet Sea Of Doughnuts

Phish Fans Are Wading In A Red Velvet Sea Of Doughnuts 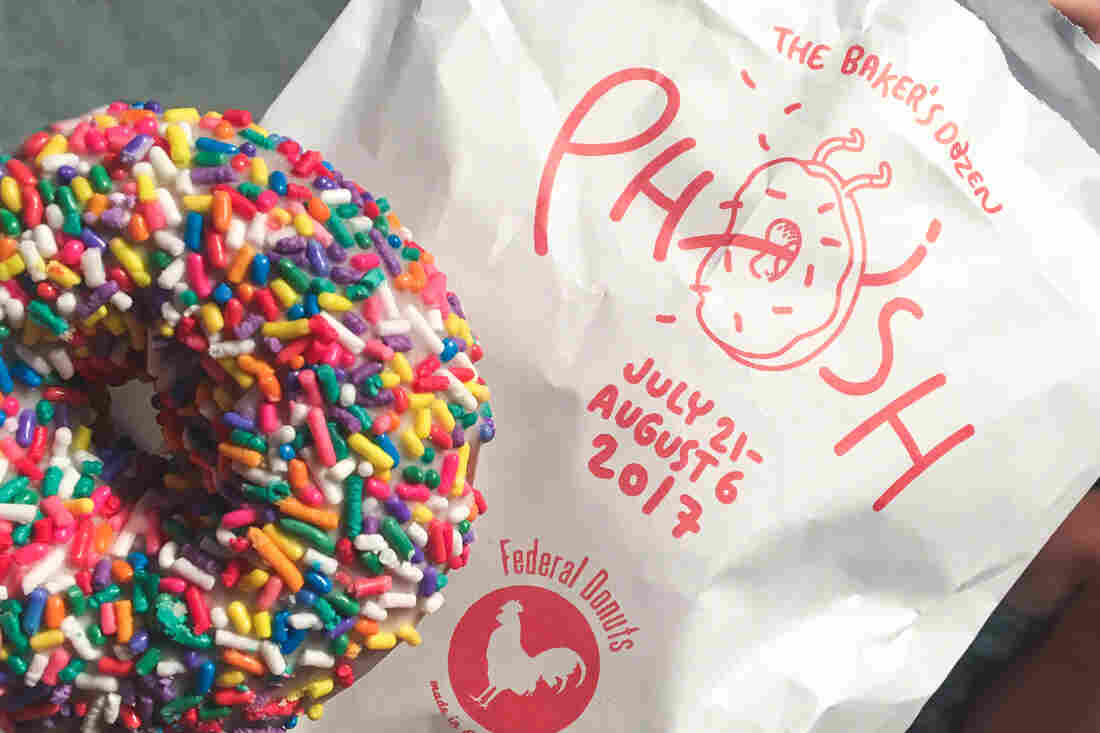 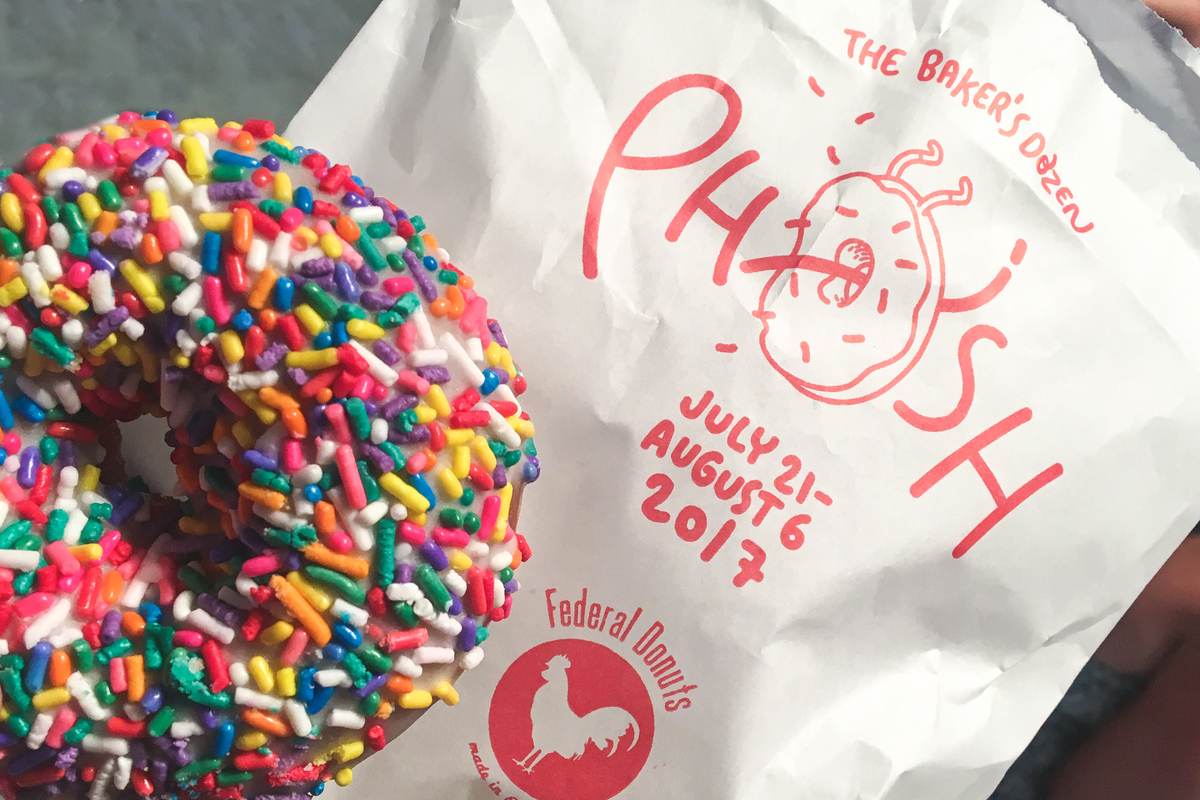 A couple months ago, Felicia D'Ambrosio, co-owner of Federal Donuts, got an email from Phish, a band she's been crazy about and following for years. The email simply listed flavors.

The flavors, while mostly conventional ideas such as strawberry and powdered, had much bigger meaning than D'Ambrosio could've imagined at the time. They'd play into a nightly theme for the celebrated jam band's 13-show residency, aptly known as the Baker's Dozen, at New York City's Madison Square Garden from July 21 to August 6. And Phish asked D'Ambrosio's popular Philadelphia doughnut and fried chicken shop to provide treats to concert-goers as they enter the show each night.

D'Ambrosio is a lifelong Phish fan, so the opportunity has been surreal to say the least. 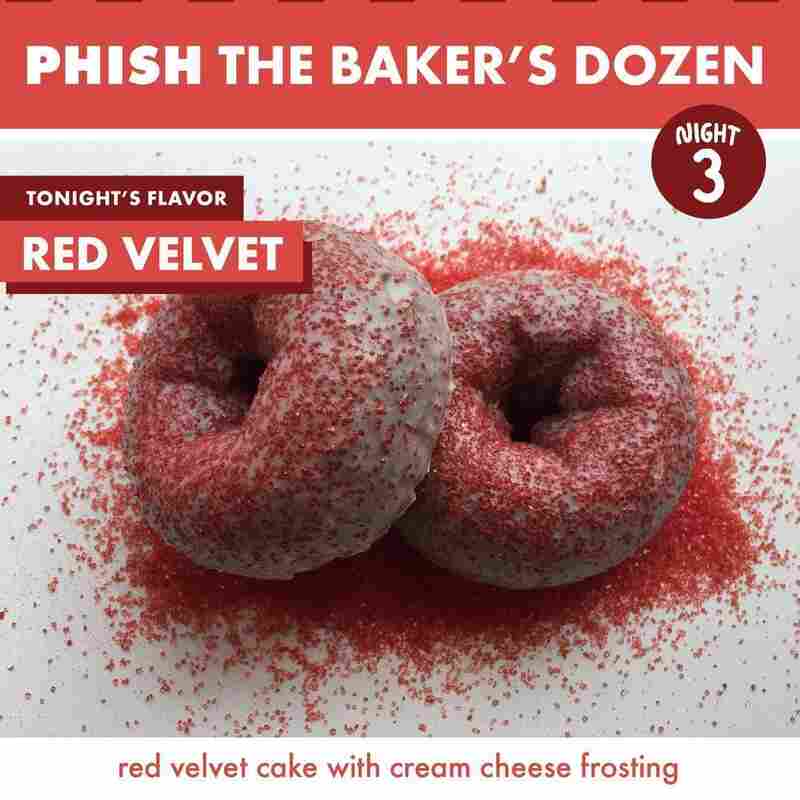 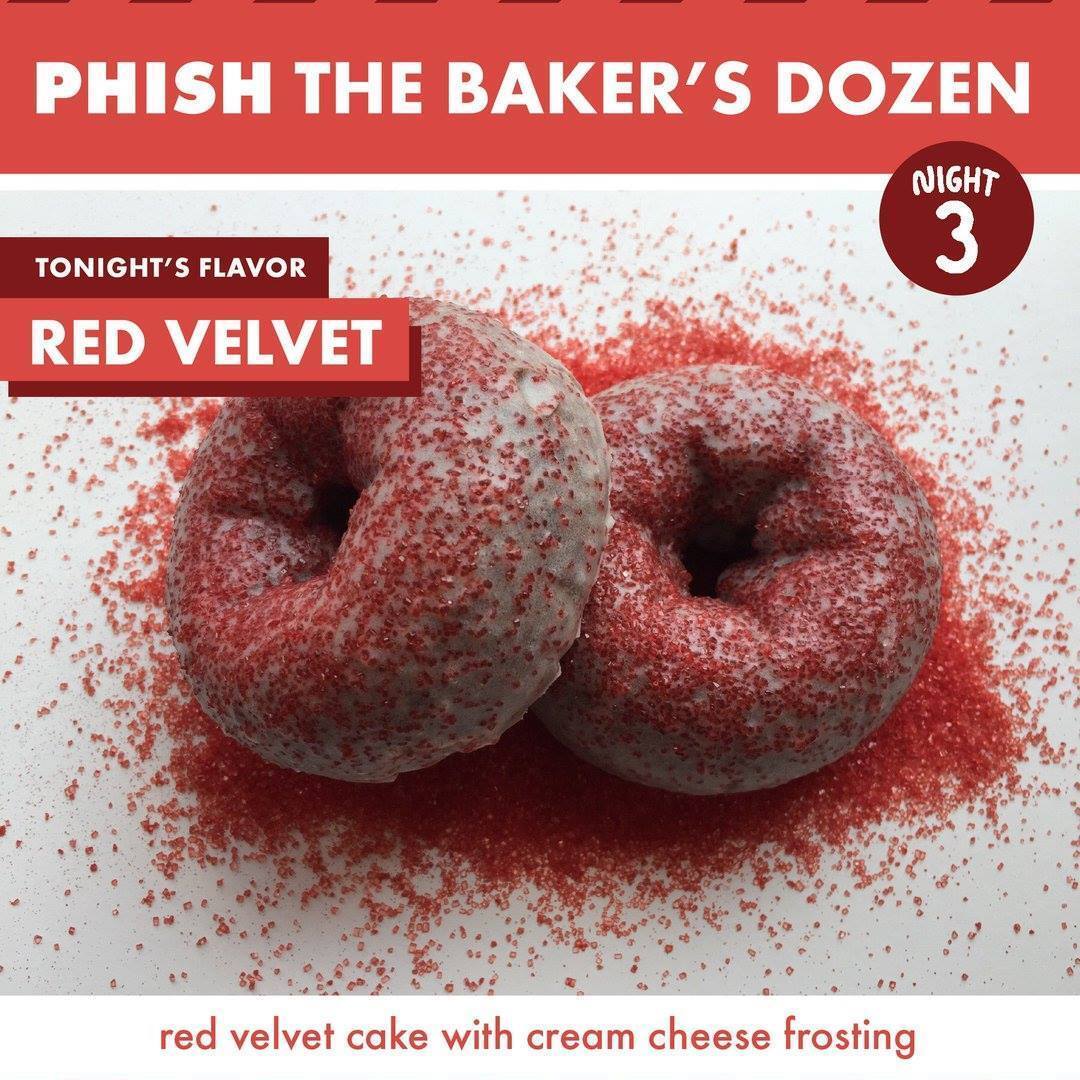 "I don't know what we did to get this special blessing from Phish," she says over the phone from New York City on an off-night between Baker's Dozen shows. "I've been getting a lot of attention I don't deserve because all I did was answer emails from the band's manager. It really has been the hard work of our chef, Matt Fein."

Fein has been working overnight with limited staff at his side, and sometimes by himself, to prepare thousands of doughnuts the night before every show. According to Fein, that's an equivalent to nearly five days' worth of doughnuts for one of their four Philly stores. Aware that this was no small undertaking, Fein was relieved when the flavors were simple, although some were particularly work intensive.

"We had to come in around 9 p.m. the night before to make the red velvet doughnuts for night three because the dough for that one can be a bit more temperamental," Fein says while on a day off between shows. "The same went for night four's jam filled doughnut. We knew it'd be a lot of extra work to fill them, so we had to go with mini doughnuts."

Here's where Phish's tendency for gimmicks and general on-stage tomfoolery intersects with Federal Donuts. The Baker's Dozen's red velvet doughnut was complemented by the band opening the show with a cover of the Velvet Underground's "Sunday Morning," then ending the night with the Velvets' "Sweet Jane." The following show included a 30-minute version of "Lawn Boy," a lounge tune typically under three minutes and rarely jammed out, from Phish's 1990 album of the same name, just because it was jam-filled doughnut night.

The ninth show of the Baker's Dozen included Scott Joplin's classic ragtime "Maple Leaf Rag," which Federal Donuts complemented with a maple-glazed doughnut with cinnamon icing drizzle. On Night 10, fans received doughnut holes with a peanut butter chocolate dust, and the band opened their set with a cover of "Way Down In The Hole," originally by Tom Waits.

Even though D'Ambrosio has been able to attend all the Baker's Dozen shows, it wasn't all fun and funky dancing for her. She's been responsible for overseeing operations of the doughnuts being handed out and all the volunteers working for the Waterwheel Foundation, a foundation started by Phish that benefits local nonprofits on each stop of their tour. By working closely with Phish's management along the way she's been able to get backstage a couple times. Despite having not met the band yet – her fingers remained crossed at press time – management did let her pick the music between sets one night, to which she repped Federal Donuts' Philly pride by picking Low Cut Connie and Waxahatchee, as well as the late William Onyeabor.

D'Ambrosio says it was hard to keep herself from sharing any insider information about Baker's Dozen themes leading up to the residency. But she admits to feeling privileged knowing what was to come of the shows when she saw their list of preferred flavors. 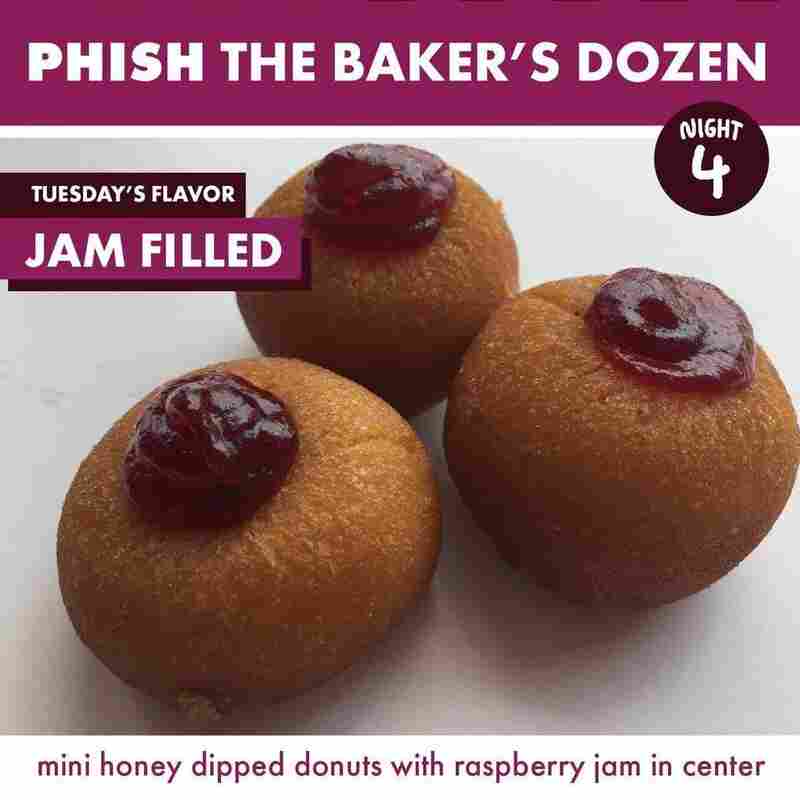 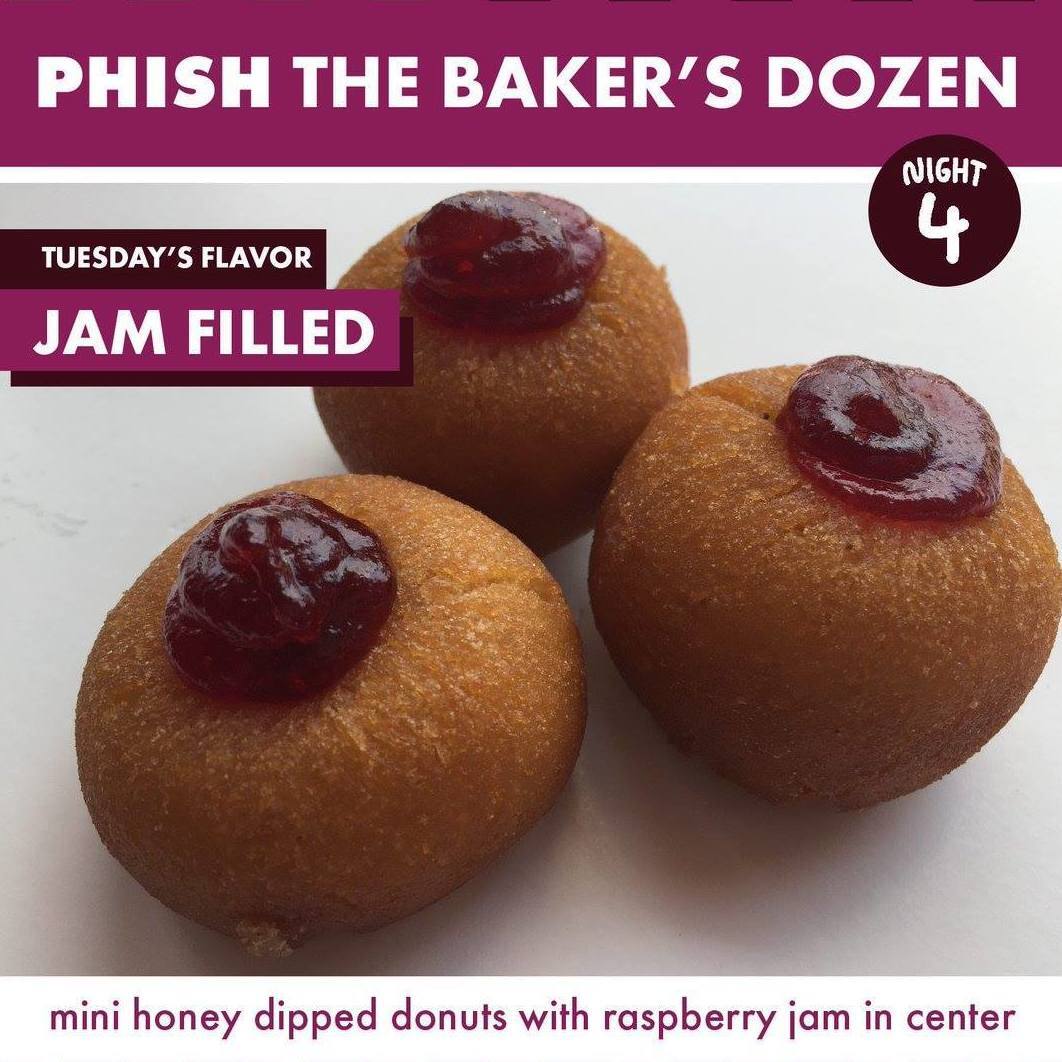 "When I saw [jam-filled] in their total brainstorm of ideas I was like, 'Oh, man, the band is promising what they are going to deliver," D'Ambrosio says. "Then later we found out these flavors would drive this gag, which is sort of central to the Phish experience, with all its fun surprises with everything that happens at the show. And everyone has been like, 'I can't believe you kept it a secret.'"