Accessibility links
World Cafe Nashville: Molly Tuttle : World Cafe Catching up with the first female to ever be nominated for International Bluegrass Music Association's guitarist of the year award — she was not expecting the honor. 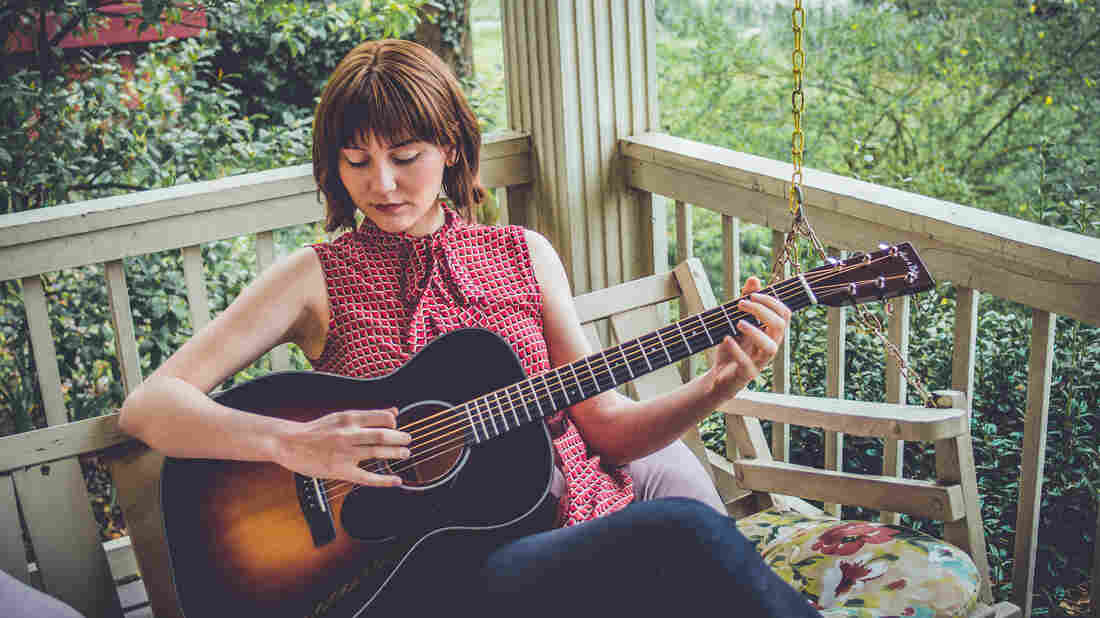 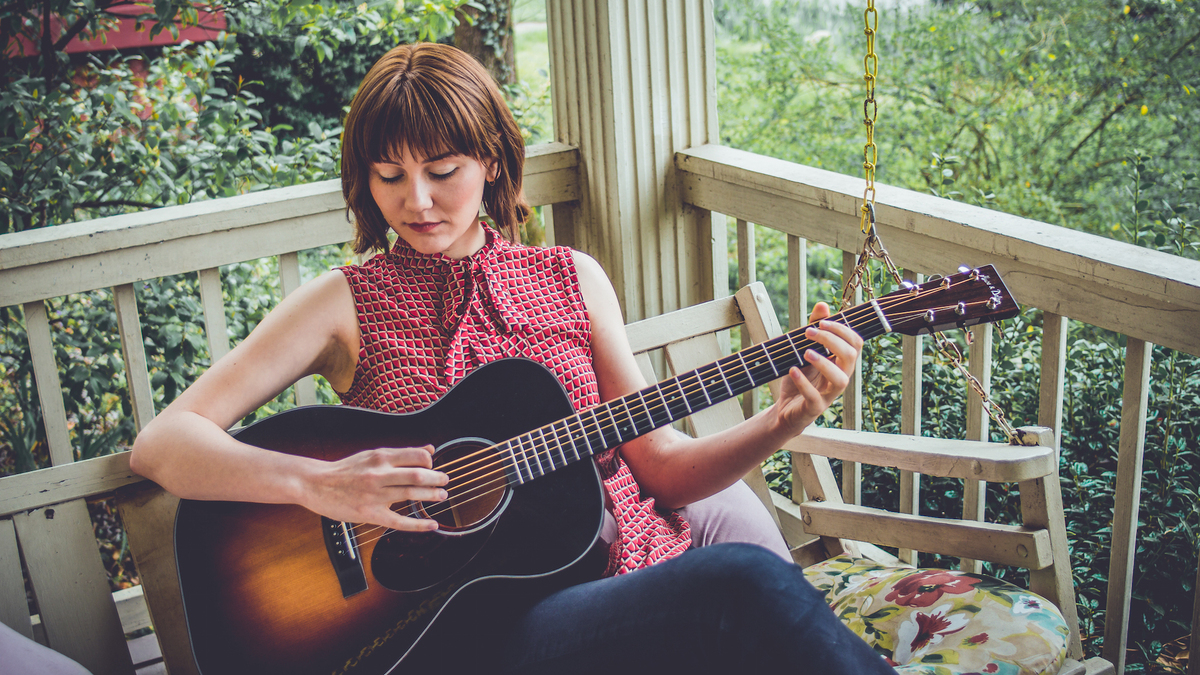 Kaitlyn Raitz/Courtesy of the artist

In the 27 years that the International Bluegrass Music Association has been handing out awards, no woman had ever even been nominated for guitarist of the year, until now. Molly Tuttle, a 24-year-old California native and current Nashville transplant, was named as one of the five elite pickers vying for the trophy this year. She's also up for emerging artist and female vocalist of the year.

This past June, Tuttle released her first solo EP, the bluegrass-informed singer-songwriter collection Rise. Her songs, singing and solos, much like her demeanor, tend to have an inward-looking elegance to them; they're the outward expressions of a searching mind and a longtime dedication to cultivating her craft.

Tuttle's trio of nominations are no small deal. She hasn't even been out of college that long, but participates deeply in a multigenerational scene that, while hardly monolithic, does contain a traditionalist contingent that can be resistant to free-thinking new arrivals and that sometimes overlooks the abilities of its female virtuosos.

During a break from the road, Tuttle talked with World Cafe about how she reached this point, what it means to be recognized for her work and how she and her peers straddle multiple acoustic music scenes.

Jewly Hight, NPR Music: You were just teaching at Targhee Music Camp. For the uninitiated, could you describe what your role is at a camp like that?

Molly Tuttle: I was teaching a core guitar class for a few hours a day. This camp had all levels, so I taught advanced, intermediate, beginning, all different ages. There were some kids there. Besides the core class, you teach electives. I taught one on rhythm guitar, one on cross-picking guitar ... I used to do a lot more camps. That's kinda how I got started into teaching classes, was through those music camps that they have all over the country.

How many of the students were young women or girls?

At this particular one, I think there was a fair amount of younger women and girls. It really varies from camp to camp. A lot of times with the guitar, especially once you get into teaching advanced guitar, there aren't as many women. It's always nice when you have a few women who are in the advanced guitar class, but I think at this one it was all men in the advanced class. But there were still some really great women guitar students there throughout the week.

I was just talking with a friend who attended the Old Fiddler's Convention in Galax, and she said that she noticed a huge increase in the number of young women participating in the old-time band competitions, so I wondered if that's a trend you're seeing too.

At Targhee, I was amazed at how many women teachers they hired. One of the nights we did a band that was [mandolinist] Sierra Hull, [fiddler] Brittany Haas, [guitarist] Courtney Hartman, [bassist] Hasee Ciaccio. It really felt, more than any other camp I've taught at, that they really thought about having women represented as teachers. You definitely see a lot of younger women now taking leads on guitar, whereas when I was young, I didn't know any other young women who did.

You're just 24. People could look at your age and accomplishments and assume that you're an anomaly, but it's not unheard of for those who get an early start in the bluegrass world to be impressive players by their late teens or early twenties. Did you feel like the path was well-trod ahead of you?

Yeah. In the Bay Area, there were people I really looked up to, like Laurie Lewis and Kathy Kallick, who had their own bands and were playing a lot. That kinda got me started writing my own songs and thinking I wanted to have my own band someday. They kind of laid out this path. And of course, Hazel Dickens was a huge hero of mine, too. But then there were people my own age — I would run into Sierra Hull at festivals. She was out there with her own band playing all the time, so it was inspiring. She's just a few years older than me, but it was cool to see people like her starting from such a young age.

You combined all the different forms of training available to young players; a family band, music lessons, side-person work and formal education at Berklee. What did it do for you to be formed by all of that?

I think it's all gone into my playing and how I interact with other musicians and how I tour. My dad is a music teacher. He teaches private lessons in the Bay Area, and he's done that for longer than I've been alive, over 30 years. He would teach me tunes and we would jam together all the time. From a young age, I was playing with him and playing with his other students who are around the same age as me, so that was a really good community to grow up in and have people my own age who were challenging me to work on improvising. Then playing shows with my brothers and my dad — we never toured extensively, but we did do a lot of local shows when I was a teenager, and we flew out to a couple festivals. That was the stage experience; I think that was valuable to have starting from my teens.

I think people are a lot more familiar with the template of a singer-songwriter who happens to be a woman than they are with a virtuosic instrumentalist who's a woman. Was that something you were aware of coming up?

That wasn't really in my awareness until I got to Berklee. I made the decision to not go there as a vocalist and to just study guitar and songwriting. That's when it really hit me that "OK, this is not a common thing."

I never had another woman in any of my guitar classes. Guitar is, I think, one of the most gendered instruments, for some reason.

You recently posted on social media about playing and speaking at an alopecia conference. That's one instance where you were participating in a community that's not built around music. What did you feel like you could offer in that context?

I have had alopecia, which is an autoimmune hair loss disease, since I was two. It doesn't affect your health at all, but it effects how you see yourself, how others see you. I've had a feeling my whole life that this was something I could offer the alopecia community with my music, and vice-versa, kind of offer the music community awareness about people who are dealing with hair loss, and tying it in to accepting everyone for who they are.

You straddle a lot of different musical worlds. There are videos of you performing with folk-pop singer-songwriter Korby Lenker and bluegrass fiddler John Mailander and doing Joni Mitchell covers with Lindsay Lou, the frontwoman of a string band pop outfit. You made your EP with Kai Welch, an Abigail Washburn collaborator whose own roots are sort of in indie rock, featuring guests from various Americana, roots and acoustic niches. How do you experience all those scenes as intersecting?

The scenes definitely overlap a ton. Someone like Kai is a great example of someone who's worked with a lot of bluegrass bands, but he doesn't come from a bluegrass background. I think that's what makes him appealing to a lot of bands who are bluegrass but also love other genres. I've always listened to a lot of different music.

I definitely have a strong bluegrass background, but I've never made myself only play bluegrass. I always wanna listen to new stuff and be learning new styles of playing and pushing myself in different directions. That's what made me reach out to Kai, and through him I met all these other musicians who come from different backgrounds. It all intersects; you just have to reach out to different people sometimes to get out of your own circle.

Of the three IBMA nominations you received recently, guitarist of the year was definitely the one that stood out to me.

No, I had no idea. I guess if I thought about it, I couldn't remember any other women being nominated, but then I read an article that mentioned I was the first woman to be nominated. I was like, "Oh my gosh." I teared up a little bit.

There are multiple steps in the IBMA's balloting process. Had you ever even made the long list before?

No. This was my first year on the long list. I was feeling excited about that. I was like, "Cool, this is a great first step to maybe being nominated some year." This happened very fast, which was really sweet. It's amazing how supportive the community's been to me in the last couple years.

Did it make you start thinking of others who've come along ahead of you?

Yeah, there are definitely women who come to mind. Rebecca Frazier is one. When I was growing up, I saw her play a lot, and she was really nice and would jam with me when I was young. Of course, Courtney Hartman. We're around the same age, but I definitely think that she deserves to be nominated and has deserved to be nominated for doing such amazing work with Della Mae.

There are women nominated in almost every instrumental category this year, except dobro. When you think about these things happening for the first time, or happening more often? To you, is that a sign of change in that musical world?

Yeah. It's kind of amazing to think about all the women who are playing now. So many of my favorite and, I think, the most exciting bluegrass bands have women in them now, and that wasn't true not that long ago. In the '80s and '90s, that was much more rare. It feels like an exciting time to be out there playing music. I think it's just gonna be more and more; as young girls see women on stage, they're gonna think: "Oh, I can do that too."

This interview has been lightly edited and condensed.