Accessibility links
World Cafe Nashville: Bryant Taylorr : World Cafe In this session, we catch up with the 23-year-old alt-R&B singer and songwriter after the release his first EP, Juice. 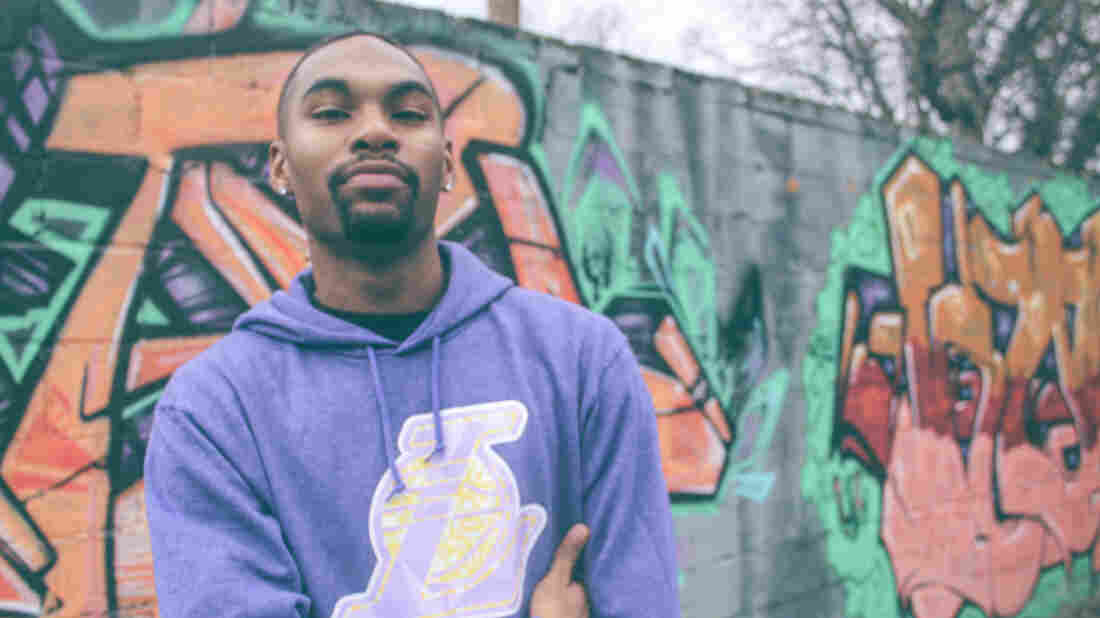 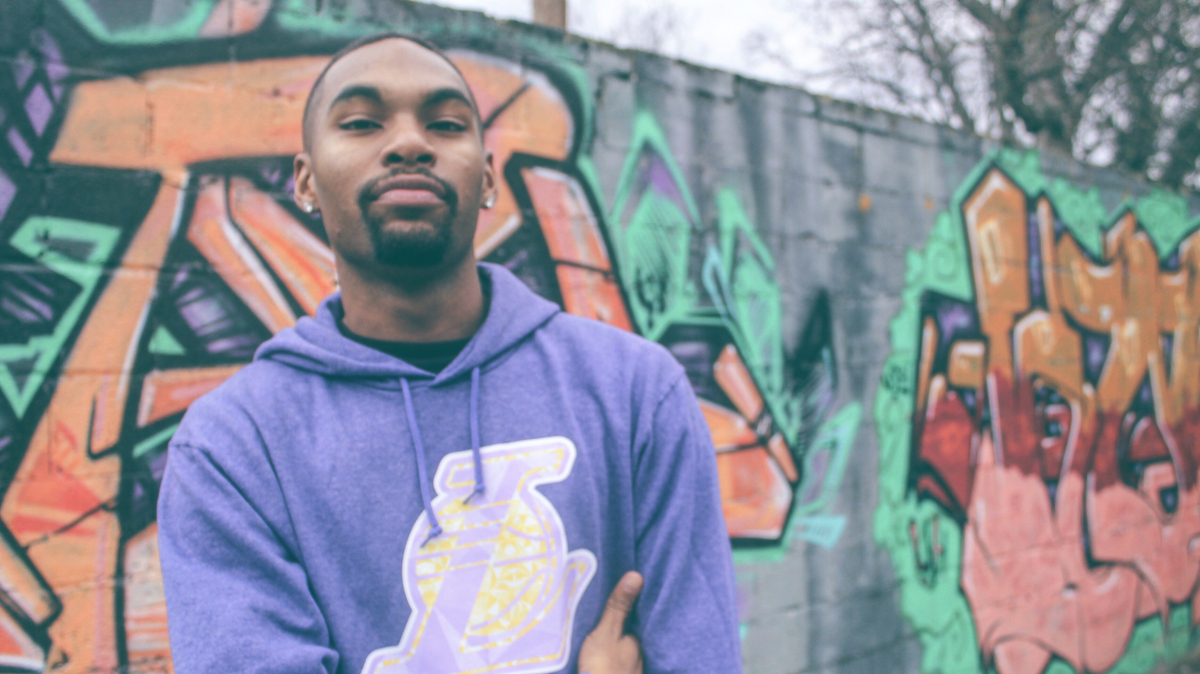 Bryant Taylorr eyes the glass of milky-looking kombucha that his sister has placed on the table in front of him in an East Nashville tea shop. "I don't know what this is," he says, before taking a tiny sip, pushing the cup away and wryly expressing his skepticism: "Is it doing something to my soul? Is it cleansing it?"

The 23-year-old alt-R&B singer and songwriter reserves this sense of caution for things like strange, vinegary beverages. In music, though, he'll take chances on open-ended opportunities or unformed ideas with the patience to wait and see where they lead.

Born Bryant Thompson, he grew up playing drums in the Nashville suburb of Antioch, and let himself be persuaded to start singing and rapping during his senior year at Nashville School of the Arts in a music class that happened to be short on male voices. When talent scouts started sniffing around the campus, he followed a classmate into a boy band called Contagious, and the quartet tried to gain global traction at the height of One Direction's reign with a similarly sleek, choreographed angle on pop.

When the group experiment went south, the performer — who only then started going by Bryant Taylorr — shifted his focus to the solo recordings he'd been making in his bedroom studio. Three years later, he's released his first EP, Juice, which reveals the strikingly accomplished results of all that time spent holed up with his laptop: a sleepily intimate, seductively contemplative set with glacial beats, chilly synths and the frosty exhales of imaginatively layered vocal parts. The seven tracks draw on Taylorr's tight-knit circle of local collaborators, including producers AB Eastwood and Sage Tune and singers MiaReona and Xanzanxan, the sister who failed to get him to drink fermented tea and sings the hook on his original "Song to Song".

Taylorr talked with World Cafe about his evolving creative process and supportive community.

Jewly Hight, NPR Music: How did you develop your performing persona? You chose a stage name, and you talk about accessing a different part of yourself on stage.

Bryant Taylorr: I didn't know how to perform at all by myself. By myself, it was weird. Because it was like, "OK, you're not relying on anyone else to talk. Everybody's looking at you only now." It was nerve-wracking at first. When I got on stage, people only knew me as Bryant [the way he'd been known in Contagious]. Like, it wasn't Bryant Taylorr ... Time went by, and I ended up going to some shows. I ended up seeing some artists around Nashville who inspired me.

I saw Villz live. That was the first show of someone independent and local that I saw, and I thought he was so good. For me to see that live, I went home and I was like, "Nothing less. I won't settle." And I started practicing what I'm gonna say and when I'm gonna say it and how to be comfortable on stage. It got to a point where I knew I needed structure and I needed to practice it. I'm still critiquing every time I get on stage, but it's better.

You mentioned that you have a recording rig at home. Did you do all the writing and recording on the EP yourself? Are you pretty self-sufficient in the creative process?

I'm pretty much there by myself. My guy AB — he's a producer — he produced most of the tracks on there. We've never been in a room together, ever, when making a song. He sent me so much music, so many beats. I would just sit there. Something may come, and I would just record it by myself. I use [the digital recording software] GarageBand. I don't know what it is, but it just gives me something different.

A long time ago, my dad had opened up his own studio. They ended up having to move that to the house and putting it in my room, and that's where he messed up. It was in the wrong hands at that point. I had to touch. I ended up winning this laptop from a talent show, and that had GarageBand on it. So I started recording songs through my headphones all the time. I started loving these songs and falling in love with how these songs were sounding.

So you figured all this out on your own? Your dad didn't show you how to operate the gear he stowed in your room?

The producer you were talking about, AB Eastwood, is he based here?

Yeah, he's based in Nashville.

So even though you're both living here, you've never actually collaborated in the studio together.

Yeah. I think the only one [we did that way] was "Robotic". He made the beat. I was around some girls or something. Maybe I was just trying to show off. We were just being stupid. And I started singing it. I ran with it.

When I listened in chronological order to the music you posted on Soundcloud, it sounded like you started doing a lot more with vocal arrangements, stuff like pitch-shifting and manipulating your voice, singing at unexpected harmonic intervals, as you went along. How'd you develop that?

When I have the chance to listen to people [make music], I pick up from what everybody's doing, because I like the creative process. I like everybody's creative process. But I want to make sure that I'm different in some type of way ... I like to manipulate my voice in certain harmonies. I like to make it sound high or low. Because it's like, "Why not? Why have a basic song?"

Do you kind of feel like you use voices as instruments, more than relying on synthesizers, guitars, etc.?

Definitely. I think background [vocals] are what makes a song. And backgrounds aren't the main vocals, so, yeah, it is like adding instruments into the beat. Music that I'm working on right now, I'm really getting into that. I'm really stretching out. In the moment, I'm recording everything that I hear. I'll take two hours recording ... I'll stay on one verse.

The more I run into artists that record themselves, you hear the difference from somebody who just goes to the studio and somebody that has it in their house. You definitely hear it.

I can hear in your music the fact that you like to work alone. You get introspective and wade deep into emotional territory. It's not showy.

I'm weird about people being in the room when I'm recording. I like to be by myself in my own creative space ... You don't have to put on a show for anyone. Nobody's there to watch. You can be thinking about ten other things when you're recording in front of other people. It's too much going on.

But there are artists who prefer a party atmosphere in the studio.

I don't get that! To me, the fun part is making the song, not really what's in the room. There can be drinks and people smoking weed and things like that, but that's really just a distraction. It won't make me really focus on the song. I love to be by myself. You know, you talk to yourself when you're by yourself. You just do stupid stuff when you're by yourself. I love to open up, and I open up on the tracks.

I found this track you did years ago called "Bad Guy" where you were describing being a certain kind of man, being hard and soft at the same time. Is that what you're trying to project in your music?

That song was the first time I actually expressed some real feelings. I was the rapper when I was in the group [Contagious]. Knowing that I could sing a little bit, that's the first time that I put both of those [rapping and singing] together and actually told the story. That's kind of where I am now.

How did you find your circle of collaborators?

Man, it's really just friends. I grew up with AB since 5th grade. AB didn't start producing until maybe two, three years ago. ... I'm in kind of, not in a group, but a conglomerate: VLLNZ.

I've seen mentions of that. I thought it was some sort of artist group.

Nash-VLLNZ, is what it is. We started it in high school. ... It's grown into something else, something way better than I thought it would be. It's not that many artists in it, maybe about five of us: Jamiah Hudson, Slim [Vlln] X [Eastside] Erra, MiaReona, and AB, me and that's it. We have a pretty solid clique. That's really who I collaborate with, if I do. That's who I grew up with, so that's who I do music with. I've also collaborated with Tim Gent lately, and Petty.

So much of Nashville's music industry infrastructure is devoted to country, Americana, gospel, pop and rock, and the R&B and hip-hop scenes aren't as well supported and tend to require more DIY ingenuity. What's your experience been like in the local scene?

Being out in the scene, I started to shake hands with people like Petty and Tim Gent, Kiya Lacey, Villz. They're like, "Oh, I remember you. I know your music. I wanna work [together]." It's like, "For real?"? Everybody's just open arms out here. Nashville has a nice community of music period.

So it's been easy to find people who want to do shows together or record a track together.

Yeah, it is. It wasn't at one point. It's more so you have to show your worth out here, and people are gonna come to you.