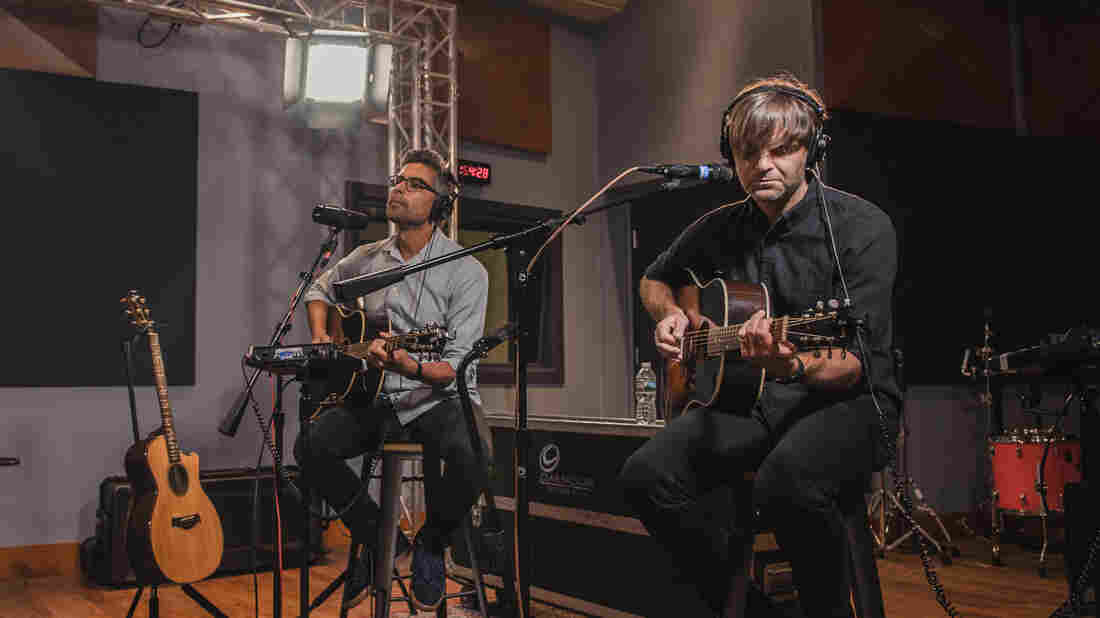 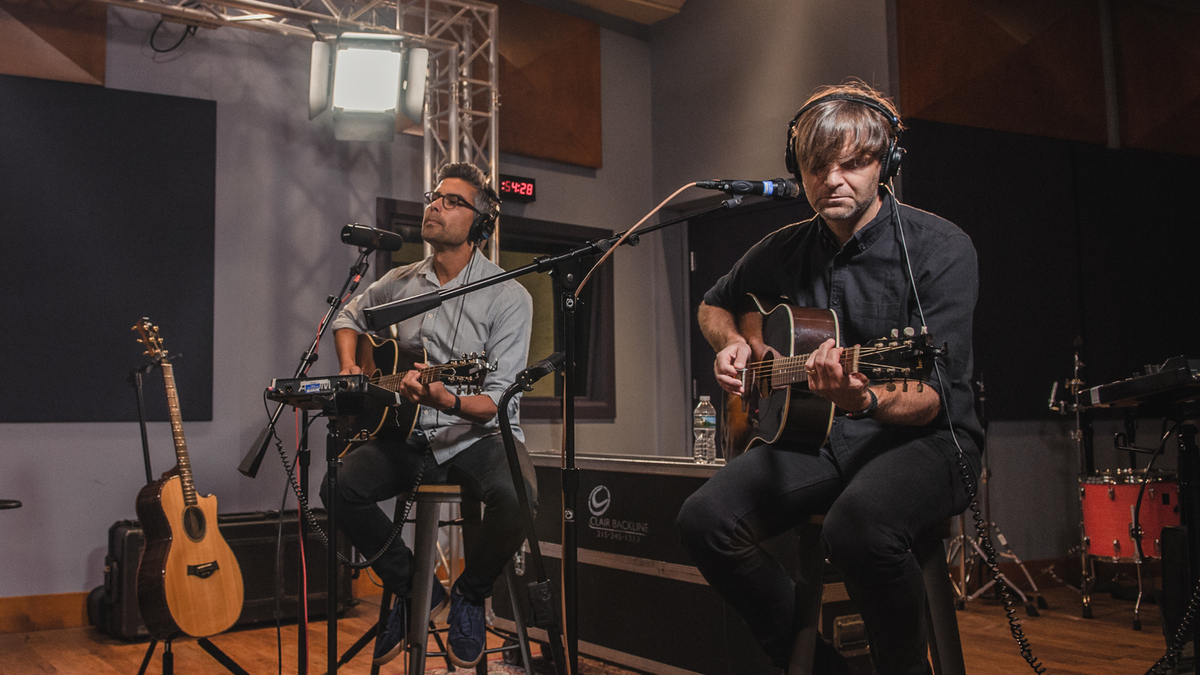 Death Cab For Cutie inside the World Cafe Performance Studio

I'm sure you've had this experience at some point: You hear the voice of an artist who was important to you at a particular time and all of a sudden, the sound of it sends you tumbling back through your own memory right to where you were – that college dorm room, those bleachers on that football field, that cross country road trip with your first love — the first time you heard that voice.

I didn't realize how powerfully that would happen for me in today's session until I heard Ben Gibbard's voice come out of his mouth live in person right in front of me. Ben fronts the band Death Cab for Cutie and in this session, you're going to hear the band perform songs from its latest album Thank You For Today. It's the ninth album from a band that formed back in 1997. One of the things I love most about the new album is how Death Cab explores new emotional territory and breaks new sound without losing the wistful warmth that has made it so special all these years.

In this session, Ben talks a lot about memory, especially how his home of Seattle has all these special places where his memories are stored and how changes that the city is currently undergoing threaten to uproot them. Ben also shares his memories of Death Cab's first-ever public gig, his reflections of 2008's Narrow Stairs and his feeling that no matter how successful Death Cab becomes, it will always be perceived as an indie band. And just in case you thought rock stars were immune to musing about how their lives would be different if they had chosen other careers, Ben reveals thoughts about the alternate path he might have taken.

Listen to the conversation in the player and read interview highlights below.

On the neighborhoods of Seattle changing

For decades there was a pizza place around the corner from my house named Piecora. It was a one story pizza parlor. Punk rockers would work there, but that's where the kids would go after their little league game. You had this amalgamation of neighborhood people and working class families taking their families out to pizza, or after a softball game, you'd see a bunch of little kids in their uniforms. It was really cute.

That was kind of my canary in a coal mine because it was right around the corner from my apartment. When I first saw the signs notifying 'Prospective Land Use' going up on the building after the business had closed down, that one really hurt because to me, it represented one of the last vestiges of a business that catered to working class people in that neighborhood.

First Listen: Death Cab For Cutie, 'Thank You For Today'

What I've found interesting about cities in transition like this — and it happens everywhere: It's New York, it's San Francisco, it's wherever else — is ... The cultural identity of the city is what attracts corporations to the cities in the first place because they're cool, and they have cool things going on, and there's music there and there's art. I find it unfortunate that those communities — along with working class people and people of color — tend to be the first people displaced when a new community of young wealthy people and tech millionaires find their way into the city.

Running is a foil to writing. I think when I was younger, music took every moment of my life. I was thinking about it, I was listening to it, when I was writing something, when I would walk away from it and still be thinking about it. It was very difficult to remove myself from it and get some distance and some perspective. Trail and mountain running, and ultra running, has brought me, maybe not a balance, but a perspective to my writing which I've found very beneficial. Getting away from thinking about music for hours at a time — five, six hours at a time on the trail — allows me to come back and the next day I'm sitting in my studio like, 'What did I work on a couple of days ago? OK, that part's good, but that thing needs some work.' I become a lot less precious about my work. So I think in that sense it's been helpful. But I don't write songs on the trail. I usually just listen to podcasts or don't listen to anything and pray there's not a bear around the corner.

On Death Cab for Cutie remaining an indie band

It's been interesting being in this band all this time because even with all the success this band has had and even though we've been on a major label for literally 14 years — we were on Barsuk for five — we're still considered by virtually everybody as an indie band.

Our motivations hadn't shifted that much from making music between that recording at the Pacer House and Narrow Stairs. There were never conversations about, 'What could we do to the music to place in front of more people?' All the sudden, we had sold a million records and had a No. 1 and were nominated for a Grammys, and it was like, 'Oh, that's kind of cool.' But being that it was never the motivation for us doing it in the first place, it wasn't that we were ungrateful for it, it was just like, 'OK, well that happened.' It was something our parents were proud of us for. It was something our parents would talk about amongst themselves. But we didn't have like a giant party when we found out we had a No. 1 record.

On the 10th anniversary of Narrow Stairs

When I think of what my favorite records are from 20, 30 years ago, records I grew up with, those are the records that I still put them on now and they take me back to a place in my life. Maybe I was fond of, maybe was a difficult time, but they transport me back. The best of those records are records I still find things in now. Whether it's lyrically or musically, I'm still finding kernels in those records I hitherto hadn't heard. It is nice to know that there are people out there who feel that way about some of our albums.

Now people are coming up to me who are in their 30s who were teenagers when We Have The Facts [and We're Voting Yes] or The Photo Album came out. If they come up to me and want to talk to me like, 'We were fans in high school,' I always love that. That's great because they cared at a really impressionable time in their life. When I heard Disintegration when I was 13, by The Cure ... I was 13 years old, that record still means more to me than any other record and I'm 42 now! I feel very fortunate that some of our albums have been those similar records for other people.