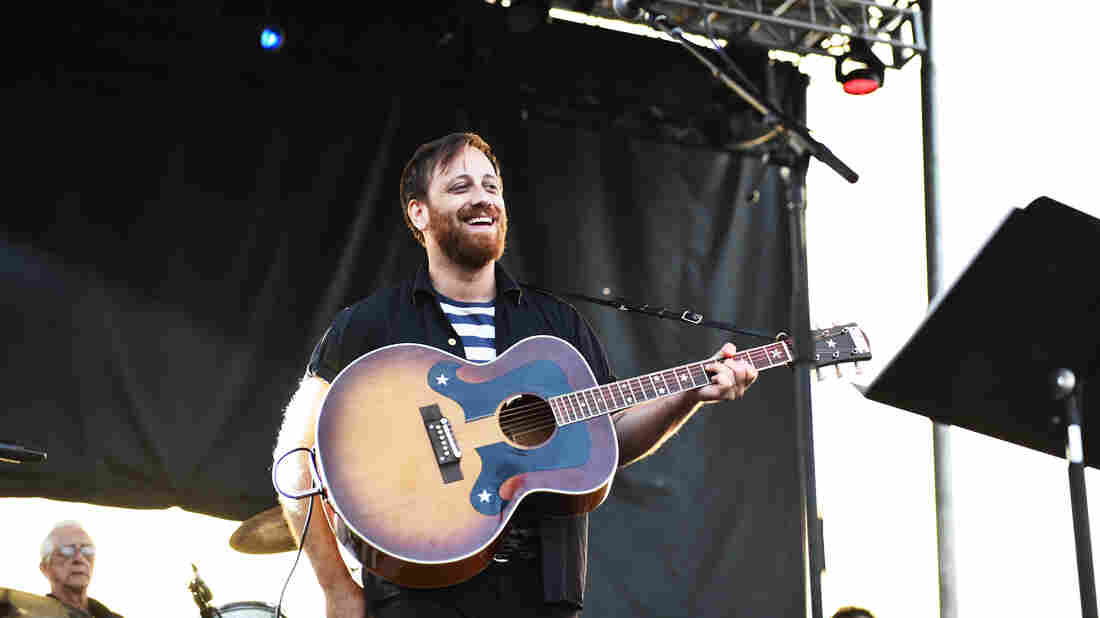 Dan Auerbach has found success in the duo The Black Keys and as a solo star. Now, he takes World Cafe through his list of collaborators at the musician's Easy Eye Sound Studios. Matt Cowan/Getty Images hide caption 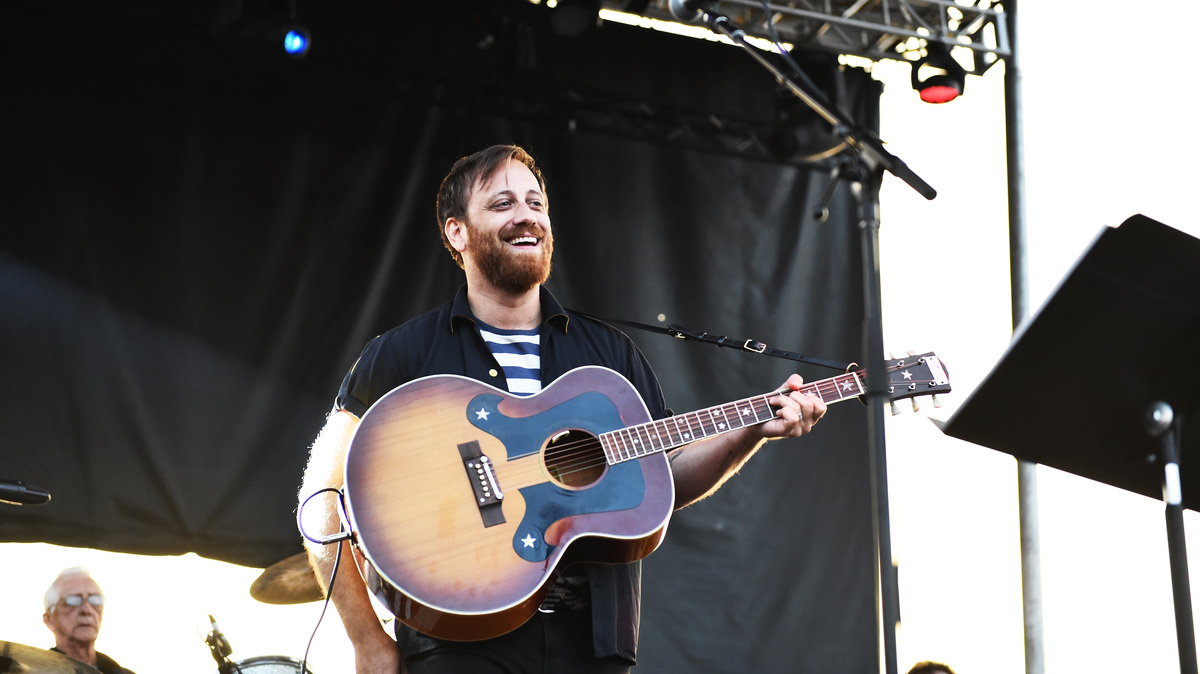 Dan Auerbach has found success in the duo The Black Keys and as a solo star. Now, he takes World Cafe through his list of collaborators at the musician's Easy Eye Sound Studios.

From the front, the unassuming Nashville building that's home to Dan Auerbach's Easy Eye Studio looks like a place more likely to house drab offices than creative labor. In fact, its proprietor confirms a call center once operated inside its walls before he bought the facility and had tracking and control rooms built to his specifications.

The operation sits apart from Music Row, the neighborhood that's historically held Nashville's highest concentration of recording studios, and for his first several years there, Auerbach kept a symbolic and practical distance from the city's multi-generational community of music-makers, focusing on his success with The Black Keys. When the duo went on hiatus, he started co-writing with veteran songwriters who called Nashville home — revered old hands like John Prine, Pat McLaughlin and David "Fergie" Ferguson. Then Auerbach decided to take advantage of the fact that there were so many seasoned session players around, calling in musicians like keyboardist Bobby Wood, drummer Gene Chrisman and guitarist Billy Sanford, names he knew from iconic country, soul and pop recordings of the 1960's and '70s, whose production and orchestration could be both warm and lavish.

"I spent a lot of money and did a lot of sessions and cut hundreds of songs and eventually found a group of people that nobody uses in this combination, and some of these guys no one had been using at all," Auerbach says of assembling his house band. The members of the band each have their own lockers, keep their gear set up in the studio at all times and stop by just to visit, sometimes with homemade cake.

"They said that the way that we make records here reminds them of how they used to make records with [Memphis legend] Chips Moman and stuff like that," Auerbach says. "Sometimes you think you're hearing something that reminds you of [landmark recordings], but you're actually hearing the people that made those sounds."

When Auerbach takes on an artist through his label imprint, Easy Eye Sound, he typically brings them in to write with him and the veteran tune-smiths in his circle for a few days. Then they spend a few additional days recording with the house band, often tracking intricate instrumental layers of pillowy arrangements all at once. The whole process usually takes a week and Auerbach's applied that same philosophy to Easy Eye's growing, grand-sounding catalog, a portion of which he unpacked for World Cafe.

"The records that I love were made this way," he explains. "It's not just the person's name on the cover. There's a whole village of people who helped make it."

1. Dan Auerbach, "Show Me" from Waiting on a Song

Auerbach released his debut solo album, Keep It Hid, in 2009, but 2017's Waiting on a Song was his first venture into completing a project by cultivating a sizable, collaborative in-house operation. The musician says he treated the experience as the research & development phase of Easy Eye.

"Show Me," the closing track of the set, was a breezy, classic pop statement of romantic impatience that Auerbach wrote with Bobby Wood. The arrangement elevates the sentiment. Its brisk, galloping groove and busy bass line eventually swell with cursive strings, dew-drop Wurlitzer chords, a precise, jangly guitar figure and the airy echo of backing vocals. "It gets more and more urgent as it goes on," Auerbach says.

Auerbach originally brought Louisiana bluesman Robert Finley to Nashville to record the soundtrack for a graphic novel, but the studio collaboration clicked so well that Auerbach decided to keep it going, offering previously unrecorded selections from his own songwriting catalog. "'You want to sing a few more, just for fun?'" he'd asked Finley. "And after like a day and a half, we had the whole record finished."

Finley sang the slow-burning ballad "Holy Wine" in a handsomely woolen falsetto, handling the melody's ornate swoops and climbs with seasoned grace. "He knew how to sing over complex changes, just because he grew up playing gospel," Auerbach notes. "He does blues music because it's cheap and easy for him to do it. You just bring a guitar [to a show], and it's easy. But if you put him in front of a giant orchestra, he can also sing like that, too."

Auerbach says the hardest part about working with Finley was working around his blindness. "I had to tell him the words," Auerbach says. "I had to recite and kind of sing line by line, and but he's a quick learner."

2018 began with the release of an album by the campy, girl group-interpolating garage rock band Shannon & The Clams on Easy Eye, but Auerbach convinced front woman Shannon Shaw to return to the studio on her own for her first experience with majestically-orchestrated pop arrangements, like the one that flanks her rasp during the melodramatic number "Golden Frames." The way that Auerbach works, that meant capturing her vocals live while the members of the house band laid down their parts.

"She was so nervous when we started," Auerbach recalls. "She was intimidated because she was used to having her Clams security blanket. So it was a lot for her. And I don't think anybody had ever put that kind of pressure on her to be the lead person. ... I just pushed her to keep going and to just kind of go with it, and she did. I think by the end of the week of working [at Easy Eye]. she was so happy she didn't want to leave."

When Auerbach first heard a teenage Dee White, he detected sophisticated musical sensibilities that couldn't be concealed by the Alabama-born singer's lack of performing experience. "We call him Boy Orbison," Auerbach quips, comparing White to one of the most operatic and enigmatic pop singers of all time. Part of the resemblance has to do with White's vocal instrument, a tremulous, crystalline tenor, and part has to do with his easy delivery. Once Auerbach explained to White how softly Orbison sang, allowing the microphone and reverb to amplify his expression, White "got it real quick, how to ease up a little bit and sing a little bit more naturally on and only push it when you have to."

"Crazy Man," a plaintive promise of personal transformation that White reportedly learned from a version uploaded to YouTube, has, in Auerbach's words, become something of a theme song. In an elegant display of self-scrutiny, White floats to the melancholy pinnacle of the melody at the beginning of the chorus. "In the studio listening to him, all the musicians were blown away when he would just do that so effortlessly," Auerbach recalls.

5. The Gibson Brothers, "Love The Land" from Mockingbird

Close, piquant sibling harmony and stylistically wide-ranging song sources have always been specialties of The Gibson Brothers, Eric and Leigh. But on the dozen-plus albums the group's made since the mid-'90s, the band habitually framed its vocal sound with the driving, acoustic engine of bluegrass picking and strumming. When Auerbach invited Eric and Leigh down to write and record at Easy Eye, the music that emerged was a sparkling blend of classic country, folk-pop and West Coast soft-rock.

"They grew up listening to all those Bakersfield sounds, and they listened to rock radio," Auerbach says. "And so, even though it wasn't what they did in the bluegrass band, it's almost been an influence since before they started playing bluegrass. ... It made sense to me. I don't know why it took them so long."

The Gibsons, who hail from a dairy farming background in upstate New York, have frequently written and selected songs that pine for pastoral settings, but "Love The Land," a tune with a fetchingly ruminative melody and tranquilly refined arrangement, has a different feel than most of their songs in that vein. "We wrote that one with Joe Allen — the great Joe Allen — who played bass on all the Don Williams records," Auerbach clarifies. "He's, like, part Native American, lived out in the West, you know, horses were his life. And when you get around him, he talks slow and takes his time and you end up writing a song like that."

6. Yola, "Ride Out in the Country" from Walk Through Fire

Auerbach and his Easy Eye crew saw British singer-songwriter Yola through the creation of her first full-length solo album, and surrounded the vivid yearning of her songs and exquisiteness of her performances with often lush accompaniment. "It sounds fancy sometimes," says Auerbach, "but when you get down to it, sometimes these songs like 'Ride Out in the Country,' it's four chords, the whole song. ... You kind of fool the ear when you're in the studio. It's a different way of performing, and these guys just know how to do it."

"I love to put steel guitar on soul tracks. And a little bit of banjo underneath to kind of bubble away," Auerbach says of the sumptuous country-soul sound they achieved with "Ride Out in the Country. "Instead of doing regular strings, we did triple fiddles, real Nashville." But, as he notes, it's also got a bit of a "Memphis feel," and West Coast acoustic guitars.

"Yola was so great at just sort of letting her light shine through. She steered the ship," he says. "When she would get soft and when she would get loud, we would follow those cues and we would adjust accordingly. That's how we'd do the whole session. And we were done in three days."