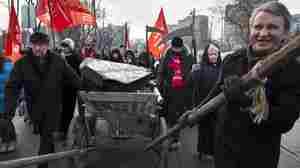 At least 5,000 Russians marched on a frosty Sunday afternoon in Moscow to protest plans to lay off thousands of doctors and close hospitals against the backdrop of a flagging economy. Alexander Zemlianichenko/AP hide caption

November 30, 2014 • Several thousand demonstrators marched on Sunday to protest the government's plan to eliminate jobs for up to 10,000 doctors and close 28 of Moscow's hospitals due to budget cuts. 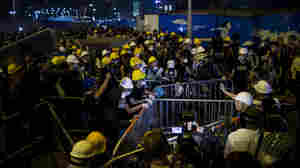 November 30, 2014 • The student-led demonstrations calling for greater freedom in the Chinese territory have been going on for more than two months with no sign of compromise from Beijing. 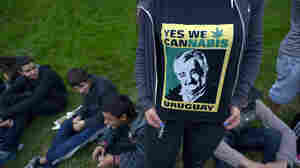 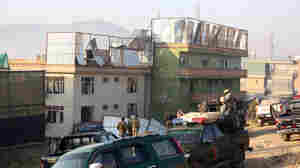 Afghan security forces inspect the site of an attack in Kabul, Afghanistan, on Friday — one of several in recent days that appears to signal a major upsurge in Taliban violence in the city. Rahmat Gul/AP hide caption

November 30, 2014 • The resignation of Gen. Zahir Zahir came after a series of attacks against foreigners in the capital that are attributed to the Taliban. 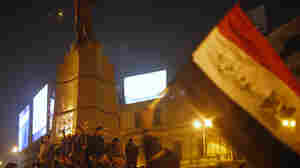 November 30, 2014 • The protests came after the 86-year-old former strongman saw charges of murder against him overturned by an appeals court.

November 30, 2014 • Liberia has been a death zone for those exposed to the Ebola virus. NPR's Rachel Martin speaks with correspondent Kelly McEvers about what she saw on the ground, and what she will find hard to forget.

November 30, 2014 • The Shetland Islands have a knitting tradition that goes back centuries. The islanders' style persists, despite their modern wealth. This story originally aired July 2 on All Things Considered.

November 30, 2014 • Many Syrians fleeing war hope to get to northern Europe. An increasingly popular route is across the Mediterranean to Greece. Those who make it safely often face dire conditions when they arrive.

In Dubai, Shoppers Hit The Malls For 'White Friday'

November 30, 2014 • Many in the international city of Dubai celebrated Thanksgiving and then went shopping. NPR's Rachel Martin speaks to correspondent Deborah Amos about the new tradition in the city of shopping malls.

In Dubai, Shoppers Hit The Malls For 'White Friday'

November 30, 2014 • Those who vaccinate children in Pakistan risk their lives. Correspondent Philip Reeves tells NPR's Rachel Martin that the Taliban is gunning down health workers, who are suspected of being spies. 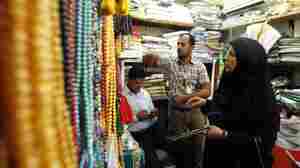 An Iranian national shops at a popular market in the holy Iraqi Shiite city of Najaf. Recently, the city — where millions of international pilgrims visit every year — has been spared the worst of Iraq's violence. Haidar Hamdani /AFP/Getty Images hide caption

November 30, 2014 • When you think of Iraq, you may picture a desert battlefield. But life is not like that everywhere. The southern Shiite heartland of Najaf is full of religious pilgrims and bustling business.

November 29, 2014 • On Saturday, a judge dismissed the charges against the former Egyptian President, who had been accused of being complicit in the murder of demonstrators during the uprising that led to his ousting. 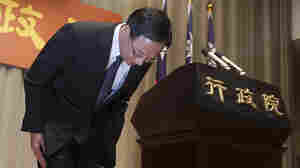 Taiwan Premier Jiang Yi-huah bows during a news conference in Taipei after the ruling Kuomintang (KMT) party was defeated in the local elections on Saturday. MIinshen Lin/Reuters/Landov hide caption

November 29, 2014 • Prime Minister Jiang Yi-huah stepped down after the Kuomintang party (KMT) suffered losses in districts across the country. 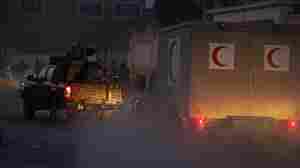 November 29, 2014 • The militant group targeted a different guesthouse in an attack on Friday. The incidents are part of a major uptick in violence in the country in recent days. 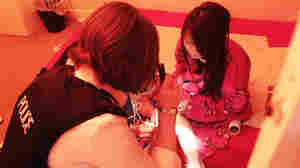 Police help a potential victim of trafficking as they raid a brothel in west London in 2011. Note: the victim's face is obscured to protect her identity. Lewis Whyld/PA Photos/Landov hide caption

November 29, 2014 • The Home Office says a re-analysis of its statistics shows more trafficked individuals — including women and children forced into prostitution — than previously thought.