Accessibility links
Darwin: The "Reluctant Revolutionary" Charles Darwin is most remembered for his revolutionary theory of evolution. As a child, he hated school, but Darwin loved to read and to explore the natural world. Throughout his life he was constantly experimenting — with seeds, plants, worms, gases, and Galapagos flora and fauna — to understand the science of life.

The Butterflies And Beetles Behind Evolution

November 25, 2009 • Alfred Russel Wallace was Darwin's colleague, a globe-trotting naturalist who helped shape the theory of evolution. Thirty years ago, an antique shopper wandered into a modest antique shop in Arlington, Va., looking for Chinese carpets and wound up buying a magnificent rosewood cabinet. It contained Wallace's personal collection of 1,600 butterflies and insects.

The Butterflies And Beetles Behind Evolution 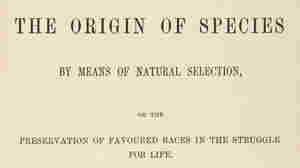 The revolutionary scientific work On the Origin of Species by Charles Darwin was published in 1859. Courtesy of Huntington Library hide caption

November 24, 2009 • On Nov. 24, 1859, a book that changed the world first appeared in print. On the Origin of Species proposed a radical new theory about how all life on Earth evolved. In many respects, the book sparks greater controversy today than when it first appeared.

November 24, 2009 • On Nov. 24, 1859, Darwin's On the Origin of Species first appeared in print and had a tremendous impact on society and science alike. Despite having more media access today, science has gotten so complex that it's hard for people to keep up, let alone evaluate the significance behind science stories. 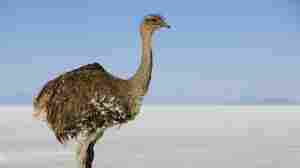 February 24, 2009 • When young Charles Darwin set out on the Beagle, near the top of his wish list was a rare and coveted bird: the lesser rhea. The bird had been sighted by a French rival — but never caught.

February 22, 2009 • This Orchids. These brilliant, flashy, sensual, and sometimes graphic flowers fascinated Charles Darwin. This year the Smithsonian National Museum of Natural History has made Darwin's interest in the flowers the theme of their annual orchid exhibition.

February 20, 2009 • Evolution doubters have adopted a new focus for their attacks on Darwin's theory: the human brain. They say it's impossible that a grouping of cells could produce something as abstract and complex as consciousness or free will. Brain scientists counter that there's plenty of evidence that the brain causes the mind. But they admit they're not exactly sure how this happens.

February 15, 2009 • Why do Charles Darwin's ideas generate such strong resistance? Maybe because it hurts people's feelings. But does accepting our place in the animal kingdom make us any less miraculous?

February 15, 2009 • The state of Kansas has been publicly wrestling with how or whether to teach Darwin's theory of evolution in the public schools. At the University of Kansas, some students are studying biological sciences despite devout Christian faith and a strong belief in the biblical story of creation. They face internal struggles similar to the ones Darwin himself must have felt as he wrestled with his scientific theories about evolution.

February 13, 2009 • Listeners respond to the story on Charles Darwin and earthworms. Melissa Block and Robert Siegel read from listeners' e-mails.

February 12, 2009 • Charles Darwin was honest with his devout Christian wife that his scientific investigations led him to doubt the existence of heaven. But he feared that publishing his scientific ideas would hurt her deeply. Only after his daughter Annie's death did this change, biographers say.

February 12, 2009 • The work of Charles Darwin, who was born 200 years ago Thursday, transformed our understanding of life on Earth and underpins the whole of modern biology. His work challenged just about everything the Victorians believed in.

Moving Darwin Into The Digital World

February 12, 2009 • The University of Cambridge in England is working to put all of Charles Darwin's scientific work online. You can already see thousands of letters, and an online version of the first edition of "The Origin of Species".

Moving Darwin Into The Digital World

February 12, 2009 • While Charles Darwin is most remembered for his revolutionary theory of evolution, he also studied earthworms.

Darwin Finds Some Followers In The Pulpits

February 11, 2009 • Churches and synagogues worldwide will be holding events this weekend to celebrate the 200th anniversary of the birth of Charles Darwin. Organizers of Evolution Weekend say it's a chance for people of faith to challenge the assumption that evolution and religion are incompatible.

Darwin Finds Some Followers In The Pulpits

February 11, 2009 • Imagine having a revolutionary idea, and then sitting on it for more than 20 years. That's what Charles Darwin did. His theory that nature — not God — was responsible for the marvelous variety of life on Earth was heretical. But then a young butterfly collector forced Darwin's hand.

February 8, 2009 • Science long ago proclaimed Darwin's theory of evolution a winner. And in honor of his 200th birthday, England is issuing commemorative stamps, coins — even quilts — in honor of its hero. But in parts of the U.S., Darwin's theories remain socially controversial.

The Forces That Shaped A Young Charles Darwin

February 1, 2009 • To honor Charles Darwin — born 200 years ago this month — Weekend Edition Sunday and the NPR science desk are launching a series called "Darwin 200." In the first installment, Keith Thomson, author of The Young Charles Darwin, talks about his early influences.

The Forces That Shaped A Young Charles Darwin

Letters: This I Believe, Darwin, Addison

January 25, 2009 • Liane Hansen reads listeners' reactions to last week's "This I Believe" essay by 6-year-old Tarak McLain, a suggestion for the upcoming series on Charles Darwin, and a note of praise for our interview with gospel singer Shari Addison.

Letters: This I Believe, Darwin, Addison

January 10, 2009 • The Galapagos Islands have been famous for their wildlife ever since Charles Darwin hatched his theories on evolution by studying Galapagos finches. Twenty years after spotting the strange lizard, scientists have discovered its secret.

July 1, 2008 • Tuesday marks the 150th anniversary of the formal presentation of the theory of evolution. Charles Darwin is credited with developing the theory, but some scholars say Darwin's contemporary, Alfred Russel Wallace, deserves credit, too.