August 13, 2009 • There are claims that many of those in detention in Iran following that country's disputed presidential election have been tortured. Borzou Daragahi of the Los Angeles Times says it's unclear just how many people are in prison.

August 5, 2009 • Iran's President Mahmoud Ahmadinejad began a second term in office on Wednesday. Iranian writer Reza Aslan talks with Steve Inskeep about the opposition which continues to protest the election results. The opposition keeps in mind the death of Neda Agha Soltan, the young woman was killed in June during violence that followed the disputed election. 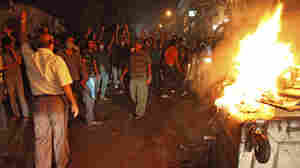 Anti-government protesters chant slogans as a public trash dumpster is set on fire during a protest in Tehran, Iran, July 30, 2009. The Iranian government has banned foreign media from covering some events in Iran; this image was taken by an individual not employed by The Associated Press and obtained by the AP outside Iran. AP hide caption

August 3, 2009 • Anti-government protests continue in Iran despite a harsh police crackdown in Tehran. The opposition movement has transformed from a campaign for a presidential candidate to a broader movement challenging the leaders and the foundation of the Islamic republic.

August 3, 2009 • Iran has put more than 100 reformists on trial for trying to stage a revolution. They are accused of working with foreigners to undermine the government after charging June's presidential elections were rigged. President Mahmoud Ahmadinejad is due to be sworn in by parliament on Wednesday. Borzou Daragahi, the Middle East correspondent for the Los Angeles Times, talks with Steve Inskeep about the situation in Iran.

July 22, 2009 • Protesters in Iran continue to march in significant numbers, despite heavy police presence in the streets of Tehran. As well, disagreements within the ruling clerical establishment appear to be worsening. All of this makes it difficult for Washington to fashion its approach to Iran.

July 21, 2009 • In Iran, the political landscape keeps changing. In the past few days, two former presidents have spoken out against the newly elected government. One called for a referendum; the other said the government had lost the trust of millions. But Iran's Supreme leader has endorsed the presidential election that returned Mahmoud Ahmadinejad to power.

July 14, 2009 • Human rights groups are trying to track how many Iranians are in custody after last month's disputed presidential election in Iran. Karim Sadjadpour, who analyzes Iranian affairs at the Carnegie Endowment for International Peace, talks with Steve Inskeep about some of the people he knows are in custody — including well-known scholars and political analysts.

In Iran, Bid To Start New Party May Be Doomed

July 6, 2009 • A pro-reform Iranian newspaper reported over the weekend that Mir Hossein Mousavi, the challenger in Iran's presidential election, plans to start a new political party. Ramin Mostaghim, a reporter in Tehran, says the idea may be doomed from the start because a spokesman for Iran's supreme leader has suggested that Mousavi is not authorized to lead a party.

In Iran, Bid To Start New Party May Be Doomed

June 30, 2009 • Many Iranian Americans watched the 1979 revolution in the streets of Tehran. Now, they watch the violent crackdown from their living rooms in the U.S. Iranian Americans talk about what the changes in Iran mean for them.

June 30, 2009 • A large police force continues to patrol key points in Tehran. Iran's leaders have intensified their campaign to paint protesters as the work of the United States, Britain and Israel. It is believed more than 2,000 people have been arrested.

June 29, 2009 • As Tehran cracks down on journalists there, one of the most reliable sources for news has also been one of the most unlikely: a Web site run by a woman in suburban Boston. Kelly Golnoush Niknejad's Web site is fast becoming one of the go-to sites for news from Iran.

June 26, 2009 • Professor Babak Rahimi recently was in Iran working on a book about the development of the Internet there. Rahimi, who teaches Iranian and Islamic studies at the University of California, San Diego, discusses with David Greene the upheaval in Iran following the disputed presidential elections.

June 25, 2009 • Everyone in Washington has an opinion about what has gone on in Iran and what U.S. policy should be in response. But the real experts say no one really knows what is going on, least of all U.S. intelligence analysts who have few reliable assets on the ground.

June 25, 2009 • Huge street demonstrations in Iran have been reduced to only die-hard protesters. Those who tried to gather Wednesday were violently dispersed by security forces. State-run television says more than 600 people have been arrested since the disputed June 12th presidential election.

June 25, 2009 • Around the Arab world, reactions to the Iranian election have ranged from demonstrations to Internet protests. But Arab leaders, many of whom are wary of the regime of Iranian President Mahmoud Ahmadinejad, have either remained silent or embraced his re-election.

June 24, 2009 • Rumors are swirling of a power struggle unfolding within Iran's ruling elite, amounting to a direct and unprecedented challenge to the authority of Iran's supreme leader, Ayatollah Ali Khamenei. The unrest is raising questions as to whether the supreme leader will remain supreme once the current crisis passes.

June 24, 2009 • The man protesters in Iran are supporting, Mir Hossein Mousavi, is a former prime minister and foreign minister. He is an architect by training and a painter. Joe Klein of Time magazine and former Iranian Deputy Prime Minister Mohsen Sazegara offer their insight on Mousavi.

June 24, 2009 • There were reports Wednesday of fresh clashes between protesters and riot police in Tehran. Meanwhile, Iran's supreme leader criticized the protesters who are challenging the results of the June 12 presidential election.

June 24, 2009 • In his fourth formal news conference, President Obama took questions Tuesday that focused on Iran and health care. He said he was "appalled and outraged" by Iran's violent reaction to protests following the disputed presidential election. The president also talked at length about the cost of overhauling health care and the role of a public insurance plan.

Iran Supreme Leader Vows Not To Bow To Protests

June 24, 2009 • Witnesses said protesters and riot police clashed in the streets around Iran's parliament Wednesday, as Ayatollah Ali Khamenei says the government will not give in "at any price." Iran also said it was considering downgrading ties with Britain, which it has accused of spying.

June 24, 2009 • The British government said Tuesday that it was expelling two Iranian diplomats. The move came after two British diplomats were told to leave Tehran. The expulsions marked a new low in Britain's relationship with Iran, which has a long history of confrontation.

June 24, 2009 • Riot police and militiamen are out in large numbers to quell any protests. But it's unclear if the calm will last. Opposition leaders continue to call for a national mourning of the protesters killed in the demonstrations. Jeremy Bowen, the BBC's Middle East editor, talks with David Greene about the situation in Iran.