Accessibility links
California In Crisis California's economy is roughly the size of Italy's, but the state is broke, and there are no easy fixes — just painful cuts ahead. In a multipart series, NPR examines the factors that have brought the state to the brink of ruin. Will the federal government ultimately be forced to come to the rescue? And if not, will California drag down the national economy?

Calif., Nev. Battle Over Who Is Worse For Business

August 28, 2009 • California and Nevada are neighbors that usually get along, but lately they have been taking some nasty potshots at each other. The two states are engaged in a video ad war with each trying to label the other as a place that is bad for business.

Calif., Nev. Battle Over Who Is Worse For Business 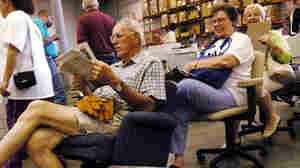 Try Before You Buy: Howard Cross of Grass Valley, Calif., reads the paper as he waits in line on the desk chair he plans to purchase at California's Garage Sale Thursday. Max Whittaker/Getty Images hide caption

August 28, 2009 • Hoping to ease a budget crisis, cash-strapped California is holding a massive garage sale. Gov. Arnold Schwarzenegger has signed the sun visors of surplus vehicles in the hope that his celebrity signature will boost profits.

July 28, 2009 • California Gov. Arnold Schwarzenegger on Tuesday signed a budget deal aimed at closing most of the state's $26 billion deficit. Cities across the state will end up bearing part of the financial burden of the deal, and many of them aren't happy.

July 16, 2009 • In California, more than 5,000 retired workers receive six-figure pensions. This year alone, the state expects to spend $3.4 billion compared with $160 million a decade ago. Hardly anyone thinks it's sustainable — and it could force many cities into bankruptcy.

July 16, 2009 • As California grapples with the mounting toll of a $26 billion budget deficit, some people are calling for a ballot initiative that would cut off all public benefits for illegal immigrants.

July 15, 2009 • When California Gov. Arnold Schwarzenegger took office in 2003, he said he would restore voters' confidence. As the state faces a worse fiscal crisis than it did then, his legacy is in peril. While some say his "inside game" has failed, others say he played into the hands of the political establishment.

July 15, 2009 • Being tough on crime is tough on California's budget. From revolving-door parolees, to powerful unions to the three-strikes law, many challenges are facing the state's overburdened system.

July 14, 2009 • As California lawmakers consider making cuts to the state's health and welfare programs to close the budget gap, people like Gina Jackson, who relies on state aid, are getting worried. Jackson, a single mother of four from Fremont, Calif., says the potential cuts are keeping her up at night.

July 14, 2009 • California schools were once in the top 10 nationally. Now as scores fail, so does the economy, further compromising the school systems. One institution hopes that becoming a charter school may help brighten its future.

July 13, 2009 • For 20 years, California politicians have quipped that the state is ungovernable. While some have blamed questionably drawn legislative districts and ballot initiatives for the problems, one group says change will only come if the state's constitution is rewritten.

July 13, 2009 • Three former California governors will give their views of the state's budget crisis later on All Things Considered. Renee Montagne talks with Madeleine Brand, who will be co-hosting that show from NPR West for the next several weeks.

Californians Hold The Power Of The Proposition

July 13, 2009 • The state's budget is in such crisis that it is issuing IOUs instead of checks. One factor in the state's complicated mess is the many voter-approved initiatives. As sloppy as the proposition process is, Californians like holding the power.

Californians Hold The Power Of The Proposition

July 12, 2009 • California's economy is roughly the size of Italy's, but the state is broke, and there are no easy fixes — just painful cuts ahead. In a multipart series, NPR examines the factors that have brought the state to the brink of ruin.

More from California In Crisis
Browse archive or search npr.org