Accessibility links
Forty Years After Space Race, What's Next? Forty years ago, the United States sent the first humans to land on the moon. The Apollo missions and the fervor of the space race were glory days for NASA. But politically and economically, the world has changed. What will space exploration look like 40 years from now?

July 20, 2009 • The first astronauts — swaggering test pilots and fighter jocks — set NASA's original can-do tone. But after NASA reached the moon, senior people left and were replaced by management types. NASA's dynamic has slowed, but the sheer distance to Mars is not to be underestimated.

Charting NASA's Future: To The Moon And Beyond

July 21, 2009 • Forty years ago, the Cold War pushed the United States to the moon. Now, NASA hopes to return to the moon to further scientific exploration, technology development and economic expansion. But some groups think instead of focusing on the moon, NASA should invest in traveling to places like near-Earth asteroids.

Charting NASA's Future: To The Moon And Beyond

July 20, 2009 • Forty years after walking on the moon, Edwin E. "Buzz" Aldrin talks with NPR about preparing for the Apollo 11 mission, and how his life has changed since splashing down back on Earth.

July 17, 2009 • We missed the deadline set by 2001: A Space Odyssey, but private companies are trying to realize the potential for space tourism. One firm hopes to offer safe, regular flights within the next three years. But the price remains out of reach for most.

July 16, 2009 • More than 40 years ago, NASA sent the Apollo 11 astronauts to the small town of Flagstaff, Ariz., to prepare for their mission. The desert terrain and a meteor crater just east of town were much like what they would encounter on the moon. 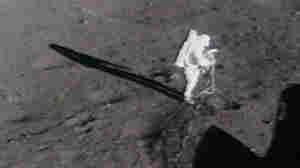 July 16, 2009 • After failing to find the originals, NASA refurbished the existing footage with help from Hollywood.