Accessibility links
Friday Night Lives In big cities and small towns, high school football is the ritual that defines the fall. And for many young men, it defines who they are. All season long, NPR brings you the stories, struggles and victories of the sport, while exploring the costs and issues it raises. 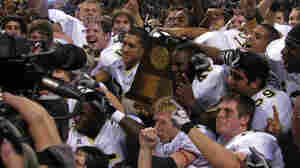 The 2009 Abilene High School Eagles hold their championship trophy and celebrate in the aftermath of their 28-17 victory over the Katy High School Tigers. Tom Goldman/NPR hide caption

December 18, 2009 • The two best high school football teams in Texas play Saturday night at the Alamodome in San Antonio. Abilene, which hasn't been to the state championship since 1956, is taking on the two-time defending state champion, Katy. Attendance is expected to reach as high as 40,000.

November 27, 2009 • Being the center of the high school football attention has changed as recruiting now starts earlier and earlier. Players and parents may rush college decisions just to put an end to the recruitment process. 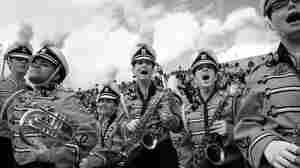 November 20, 2009 • The Ohio school has a 20,000-seat stadium, a $3 million indoor practice facility and a live tiger for a mascot. Massillon teams have won 22 state championships and they're in the running for another one. It's football "sunup to sundown," the head coach says.

November 13, 2009 • For Sunset High School's band, Friday night games help prepare for Saturday competitions. That's when band parents and friends cheer for these champions from Portland, Ore., as lustily as football fans and when judges rate musicianship and movement. 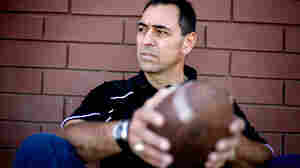 October 23, 2009 • The years of hard hits have left former NFL player George Visger with severe memory loss. His doctors warn his brain problems could get worse quickly. While he struggles with his short-term memory, his days as a star high school lineman are vivid and special.

October 16, 2009 • Every year, one or two high school football games get national attention for lopsided scores. No one likes to lose, but can something be learned by being on the wrong side of a blowout? Are we too willing to vilify coaches who are on the winning side? 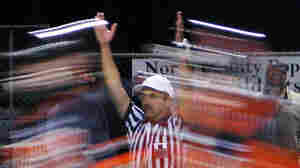 October 9, 2009 • Football is often called controlled mayhem, and we have the officials to thank for the controlled part. But any self-respecting football referee would prefer to be invisible during play. "The best game is one where the officials are totally incognito," say high school football ref Rick Gilbert. But take a close look. There's more than black and white stripes. 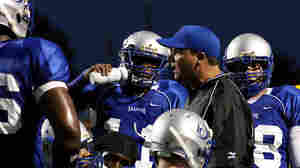 October 2, 2009 • At Fort Campbell High School, located on a military base in Kentucky, players focus on football and play hard, even while dealing with a parent deployed in Iraq or Afghanistan.

September 25, 2009 • In Unity, Ore., the Burnt River Bulls play in the 8-man football High Desert League — and they often turn out their minimum number of players. But that's not the only challenge the team faces: The majority of the players are international — and they're still learning the basics of the game, not to mention English.

September 18, 2009 • Scroll NFL and college football rosters and you'll see the distinctive names from the Pacific Islands. With their traditionally broad, solid bodies and competitive nature, Polynesians have distinguished themselves at the elite levels of the game. Many start at high schools in Utah.

September 11, 2009 • Mount St. Joseph Academy has just 53 boys enrolled, but the Catholic high school clings to its storied football past, continuing to field a team in Vermont's most competitive division. Increasingly, critics question whether the team can hang with the state's version of football powerhouses.

September 4, 2009 • In Texas last year, 45,200 student athletes were tested for steroids under a tough new program for high schools. The most frequently tested were football players. Only 19 athletes tested positive. Some say that's proof that the testing deters kids from using drugs, while others say the program is flawed.

August 31, 2009 • Thousands of people turned out Friday night to watch the Aplington-Parkersburg High School football team play — and win — its first game since 1975 without legendary head coach Ed Thomas. A former player has been charged with shooting Thomas to death in June.

August 28, 2009 • Tiny Aplington-Parkersburg High in Parkersburg, Iowa, plays its first game Friday since the slaying of its beloved coach, Ed Thomas, allegedly by a former player. The coach was a pillar of the community, and was instrumental in rebuilding efforts after Parkersburg was devastated by a tornado last year.

August 21, 2009 • For soldiers, it's basic training. For accountants, it's tax season. For football players, it's summer two-a-days. Coaches, players and parents from two high school football teams — one in New Jersey and one in Philadelphia — sweat it out in the blistering heat in the hope it'll all pay off come fall.

August 20, 2009 • NPR is kicking off a new project Friday. Sports correspondents Tom Goldman and Mike are going to take the field with high school football teams across the country this season. They will go to practices and games, hit the weight room and sit in the stands with the boosters. 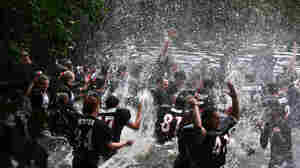 At Rye High School in New York, the end-of-game ritual is to jump into a brook. NPR wants to see photos and videos of high school football rituals where you live. clyatt.jasper via Flickr hide caption

High School Football: A Game Of Guts And Ritual

August 20, 2009 • In big cities and small towns, high school football is the ritual that defines the fall. And for many young men, it defines who they are. All season long, NPR brings you the stories, struggles and victories of the sport, while exploring the costs and issues it raises.