Accessibility links
The Shootings At Fort Hood Fort Hood remains in mourning as the community looks for answers to why an Army psychiatrist allegedly opened fired on his fellow soldiers. The outburst of violence left 13 people dead and dozens wounded. 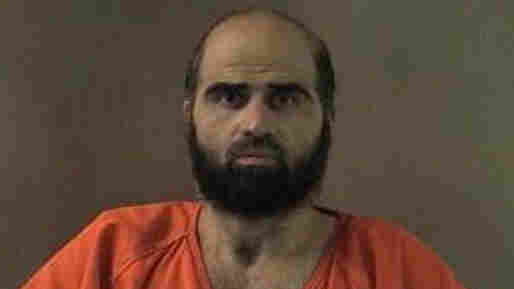 Maj. Nidal Hasan faces 13 charges of murder and 32 of attempted murder for the November 2009 shootings at Fort Hood. A Muslim, he has refused a judge's order to shave his beard, though it violates Army regulations. Bell County Sheriff's Office/Reuters/Landov hide caption

'I Am The Shooter,' Fort Hood Defendant Tells Court

August 7, 2013 • Maj. Nidal Hasan conceded on the first day of his trial that the evidence will show he killed 13 people and wounded others. Now, it looks like he'll try to use the trial to "vent his religious or ideological beliefs," reports NPR's Martin Kaste. So far, the judge has kept that from happening. 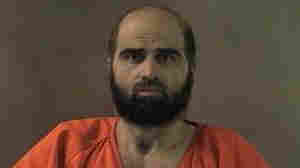 Maj. Nidal Hasan faces 13 charges of murder and 32 of attempted murder for the November 2009 shootings at Fort Hood. A Muslim, he has refused a judge's order to shave his beard, though it violates Army regulations. The trial will proceed, however. Bell County Sheriff's Office/Reuters/Landov hide caption

July 2, 2013 • Even if he wanted to, Maj. Nidal Hasan was barred from entering a guilty plea to the 13 murder counts he faces in connection with a mass shooting in 2009. The Uniform Code of Military Justice prohibits such a plea in cases that could end with the death penalty. Experts say the code goes to great lengths to protect the individual's rights.

July 6, 2011 • Maj. Nidal Hasan is charged with 13 counts of murder and 32 counts of attempted murder for the deadly November 2009 shooting rampage at the Army post in Texas.

January 21, 2010 • The Army said it's going to decide whether psychiatrists at Walter Reed Army Medical Center "failed to take appropriate action" against shooting suspect Nidal Hasan and were "derelict" in their duties. Among the doctors apparently under investigation is the only supervisor who actively tried to kick Hasan out of the psychiatry program.

November 25, 2009 • NPR has reconstructed what officials did or didn't do over the past year with regard to Maj. Nidal Hasan, the alleged Fort Hood shooter. Sources say it's likely that the FBI, which looked into Hasan last winter, may have missed clues about his character because it got information from the wrong Army file. 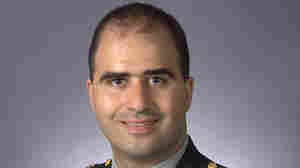 November 18, 2009 • In a letter obtained by NPR, Nidal Hasan's top supervisor at Walter Reed outlined "serious concerns" about Hasan's "pattern of poor judgment" and "lack of professionalism." The memo says he proselytized to patients, mistreated a homicidal patient and hardly did any work.

November 18, 2009 • The Connecticut senator says the homeland security committee will try to determine whether the deadly shooting at the U.S. Army post in Fort Hood, Texas, could have been prevented. Lieberman acknowledges it will be difficult to proceed without the Obama administration's cooperation but says he is confident the issue can be resolved.

November 13, 2009 • As Congress prepares to examine whether the government mishandled reports of behavioral issues with Army Maj. Nidal Hasan, the suspected gunman in the Fort Hood shootings, one key question being raised is: Could terrorism have been a motive? Investigators warn it's too early to speculate.

November 13, 2009 • Family members say Maj. Nidal Hasan had been looking for an exit from the military because he didn't want to participate in fighting Muslims in Iraq and Afghanistan. Advocates of conscientious objector status say if it were more liberally applied, it might have given Hasan a way out.

November 13, 2009 • Army psychiatrist Nidal Hasan faces 13 counts of premeditated murder and could face the death penalty for his alleged shooting of 12 soldiers and a civilian at a processing center for soldiers about to be deployed. Once the case goes to trial, it promises to be one of the highest profile cases ever within the military's justice system, and the Army is trying to do it by the book.

November 12, 2009 • The Army psychiatrist suspected in last week's shooting rampage at the Texas base has been charged in a military court. Officials say more charges could be filed as investigators continue their probe into the deadly rampage.

November 12, 2009 • As details emerge in the aftermath of the recent Fort Hood shootings, questions loom as to whether colleagues and associates of alleged gunman Nidal Hasan failed to raise concerns of warning signs about his earlier behavior because of 'political correctness. Host Michel Martin talks with Dana Priest, of The Washington Post. Priest recently wrote an article detailing Hasan's warning of threats within Military ranks.

November 12, 2009 • There is new information about concerns among Walter Reed Army Hospital officials over the job performance and psychological health of Maj. Nidal Hasan, the man authorities believe was behind the deadly shootings at Fort Hood last week.

November 12, 2009 • Chaplain Maj. Dawud Agbere, one of the 10 Muslim chaplains employed by the U.S. military, flew to Fort Hood, Texas, to support members of the military in the wake of last week's killings. Agbere says he has not faced any hostile comments since the shooting.

Recalling The Chaos Of The Fort Hood Shooting

November 12, 2009 • Last week, soldiers were lining up in the Readiness Center at Fort Hood, Texas, to receive their last checkups before shipping out to Iraq. Then one of them jumped on a table and opened fire with a semiautomatic handgun. A soldier who was wounded but managed to escape recounts the ordeal.

Recalling The Chaos Of The Fort Hood Shooting

November 12, 2009 • Thousands of Muslims are in the U.S. military, and many more work for the federal government. After the shootings at Fort Hood, many of these individuals fear they're in for some unpleasant scrutiny.

November 11, 2009 • Staff Sgt. Paul Martin was waiting to get his final medical check before deploying to Iraq when he was shot during last week's attack at Fort Hood. "I looked at my hand, and my hand was just covered in blood. And I was laying on the floor, and the floor was covered with blood," he says.

November 11, 2009 • Retired Col. John P. Galligan, one of Maj. Nidal Hasan's defense lawyers, talks to Melissa Block about defending the suspected Fort Hood shooter. Galligan says he met briefly with Hasan at Brooke Army Medical Center in San Antonio, but hasn't gotten anything from the government yet pertaining to the case.

November 11, 2009 • Starting in the spring of 2008, officials from Walter Reed and the Uniformed Services University of the Health Sciences began raising serious concerns about Maj. Nidal Hasan's troubling behavior — which some described as paranoid, belligerent and schizoid.

November 11, 2009 • Neighbors of Army psychiatrist Maj. Nidal Hasan say they are shocked about his alleged role as the Fort Hood gunman. But psychologists and experts say Hasan shared several traits with other mass killers, such as social isolation and trouble finding a mate.

Listen · 4:11 4:11
More from The Shootings At Fort Hood
Browse archive or search npr.org