Accessibility links
On The Road To Safety In the past 40 years cars have gotten safer, and highway deaths have dropped as well. But as new technologies emerge, so do new risks. Are we on the road to greater safety? Or have we sped past the era of declining fatalities? This week NPR explores these and other matters on the air and at NPR.org.

Series Overview: How Safe Are Our Roads?

November 22, 2009 • Highway safety has improved through better vehicle technology, smarter road designs and reformed behaviors, such as reduced drunken driving. But fatalities are still high: In 2008, more than 37,000 people were killed in crashes involving motor vehicles. This week, as the holiday travel season begins, NPR will explore these issues.

Series Overview: How Safe Are Our Roads?

Letter To A Speed Demon

November 29, 2009 • Erica Molitor tells her fellow commuters that driving fast and furious is not the way to a woman's heart.

The Deadliest Roads Are Rural

November 29, 2009 • The roads traveled least are the nation's deadliest roads, according to federal highway data. More Americans die on rural highways than on urban streets and freeways. U.S. Highway 6 in Utah in particular has earned a reputation as a deadly rural road.

The Deadliest Roads Are Rural

Small Cars Don't Get Any Respect

November 28, 2009 • When Lisa Troch is behind the wheel of her Mini Rover, she says other drivers treat her like she's invisible.

November 27, 2009 • As soon as Caroline Keem started commuting to work on a bike, she learned the hard lessons of the road. 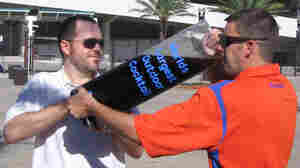 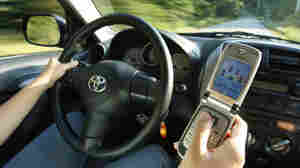 A driver uses a cell phone in Freeport, Maine, in September. Maine and more than a dozen other states have implemented laws to curb distracted driving practices such as texting or talking on cell phones while operating a car. Robert F. Bukaty/AP hide caption

November 27, 2009 • Nineteen states have banned texting while driving. It's part of a growing movement to crack down on mobile phone usage behind the wheel that is reminiscent of earlier campaigns against drunk driving. 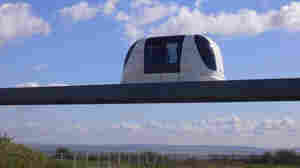 November 26, 2009 • Transportation planners are banking on a futuristic network of ecofriendly computer-automated pod cars as the next smart form of mass transit. Several U.S. cities are doing feasibility studies for personal rapid transit systems, and Britain's Heathrow Airport plans to launch its system in the spring.

When Emotions Go Into Overdrive

How To Make Trucks Safer On Highways

November 25, 2009 • Last year, over 4,000 people died as a result of truck related accidents. As part of NPR's series, On The Road To Safety, guests look at what's being done to make big rig driving on the long haul safer for truck drivers and for motorists.

How To Make Trucks Safer On Highways 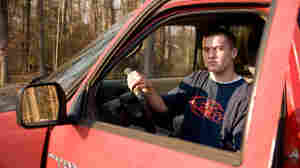 Basil Rynestead, 17, sits in the driver's seat of his Toyota pickup truck. New federal government numbers confirm that male drivers are still having twice as many fatal crashes as females. And the boys are more likely than the girls to have been speeding or drinking. Sarah Nathan/NPR hide caption

Teenage Boys More Likely To Be In Fatal Car Crashes

November 25, 2009 • The number of teenage drivers involved in fatal car crashes has dropped dramatically in the past decade. But in those wrecks, male drivers still outnumber females by more than 2 to 1. For Basil Rynestead of Fauquier County, Va., it's a battle against peer pressure and inexperience to stay safe on the road.

Teenage Boys More Likely To Be In Fatal Car Crashes

November 25, 2009 • Our sense of what's dangerous on the road is not always accurate, according to Tom Vanderbilt, author of Traffic: Why We Drive The Way We Do. Take roundabouts: "People fear roundabouts in America — they've been called 'Circles of Death,' Vanderbilt says. "And nothing could be further from the truth."

November 24, 2009 • A University of Florida study predicts that within 15 years, 1 in 4 drivers in the U.S. will be age 65 and older. As they get older, seniors may be less safe on the roads, so state and university officials and the AARP are putting together programs to help seniors drive better — and in some cases, get them off the roads.

What Would You Give Up For Safer Roads?

November 24, 2009 • As part of NPR's "On The Road To Safety" series, we'll ask listeners what they'd be willing to do for safer roads. Tell us: Would you pay more taxes for better highways? Ban cell phone use entirely? Take the keys from mom and dad? Change speed limits? Buy different cars?

What Would You Give Up For Safer Roads?

November 24, 2009 • Driver Carrie Richardson feels the heat from an impatient driver and a patient jaywalker. 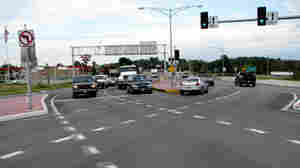 The Diamond Diverges: Cars swap sides of the road at the end of a bridge in Springfield, Mo. Missy Shelton for NPR hide caption

November 24, 2009 • The "diverging diamond" highway interchange is being put to the test in Missouri. Fans of the new design say it improves traffic flow by eliminating problematic left turns. There's just one catch: It briefly sends cars over to the left side of the road.

November 24, 2009 • Better-designed highways played a role in reducing road fatalities to a 40-year low last year. But safety advocates say the road is still a dangerous place, especially once drivers leave the Interstate Highway System and on roads designed with only drivers in mind.

November 23, 2009 • California roads once were the envy of the world. But like a lot of things in the Golden State these days, they’re not what they used to be. Federal Highway Administration data show that of the 20 major urban areas with the worst roadway conditions, eight are in California, with 64 percent in "poor condition."

States Want To Keep Illegal Immigrants Off The Road

States Want To Keep Illegal Immigrants Off The Road

November 23, 2009 • With a sour economy, spiraling deficits and automakers in trouble, Congress' safety agenda faces some tough obstacles. Federal transportation and highway safety laws are set to expire this year, and a bill to renew their funding is stalled. So Rep. James Oberstar (D-MN) is pushing a six-year, $500 billion transportation reauthorization bill.

Slow Down; Enjoy The Ride

November 23, 2009 • We asked our listeners to send us their road annoyances. Fred C. Lewis observes that those who rush ahead finish last.

More from On The Road To Safety
Browse archive or search npr.org