Accessibility links
Inside The Criminal Brain Enter the new world of "neurolaw" -- where neuroscience is used as evidence in the courtroom. 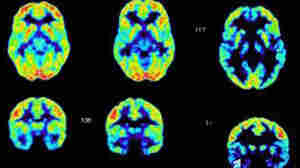 Fallon's brain (on the right) has dark patches in the orbital cortex, the area just behind the eyes. This is the area that Fallon and other scientists say is involved with ethical behavior, moral decision-making and impulse control. The normal scan on the left is his son's. Courtesy of Jim Fallon hide caption

June 29, 2010 • For nearly 20 years, neuroscientist Jim Fallon has studied the brains of psychopaths. After learning that his ancestry included alleged murderers, he decided to study his own brain. He was shocked at what he discovered.

June 30, 2010 • Brian Dugan pleaded guilty last year to raping and murdering 10-year-old Jeanine Nicarico in 1983, and he was put on trial to determine whether he should be executed. Neuroscientist Kent Kiehl testified that Dugan could not help his neurological makeup. 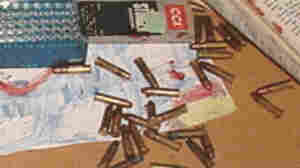 A machete that Bradley Waldroup used to wound his estranged wife. At right is the Bible Waldroup had been reading before his wife and her friend arrived at his home. Police crime scene image from the 10th District Police Department in Cleveland, TN hide caption

July 1, 2010 • Using a gun and a machete, Bradley Waldrop killed his wife's friend and then wounded his wife. In the Tennessee courtroom, the question was not who did it but why. Enter neuroscience -- specifically, a forensic psychiatrist's testimony that Waldroup had a variation of a gene that inclined him toward violence.

Listen · 7:46 7:46
More from Inside The Criminal Brain
Browse archive or search npr.org