Accessibility links
Midlife Crisis: State Of The European Union The euro -- the single currency shared by 16 nations -- has been shaken by the global economic downturn and the lack of a joint, enforceable monetary policy. The EU social model has been eroded by national debt and budget-cutting austerity measures. And a newly assertive Germany is causing anxiety among its union partners. 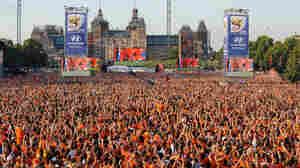 July 16, 2010 • The creation of the European Union and the advent of the euro currency have done little to dampen fierce nationalism across the continent. NPR concludes its series on Europe with a look at whether the euro, and the notion of European unity, can survive. 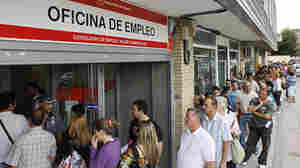 People stand in line outside a government job center in Madrid last month. After Spain adopted the euro in 1999, investment flowed into the country and the economy boomed. Now, it is suffering from the highest unemployment rate in the 16-nation eurozone and grappling with the way to recovery. Victor R. Caivano/AP hide caption

July 15, 2010 • Spain, the erstwhile "Iberian Tiger" and once the biggest creator of jobs among Europe's 16-nation single currency zone, is now struggling with a 20 percent jobless rate. It's stymied by the lack of a manufacturing base, an inequitable labor market and a limited social safety net. 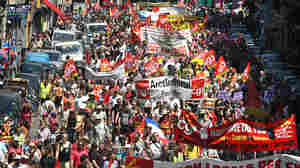 People march during a protest in Marseille, southern France, last month. Workers nationwide were striking to protest President Nicolas Sarkozy's plans to raise the retirement age to 62 from 60. Sweeping reforms to France's money-losing pension system is part of efforts around Europe to cut back on growing public debts. Claude Paris/AP hide caption

July 14, 2010 • Europe's social support system is under pressure. The recent debt crisis and the continent's demographic changes are shaking the foundations of the EU's shared social vision. In NPR's series on Europe, a look at how governments are struggling to preserve benefits while cutting costs. 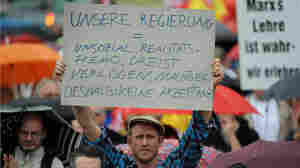 Protesters in Berlin demonstrate last month against federal government budget cuts. Here, a participant's sign criticizes the government for being disconnected from reality and power-hungry. German discontent is growing over the country's leadership -- and paymaster -- role in the European Union. Berthold Stadler/AP hide caption 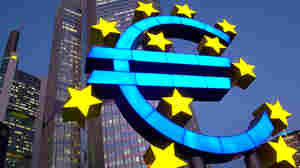 Five decades after the idea was born in the aftermath of World War II, the European Union is being tested by 21st century challenges. Above, the Euro monument is illuminated in front of the European Central Bank in downtown Frankfurt, Germany. Bernd Kammerer/AP hide caption

July 12, 2010 • The European Union, a vision born after the devastation of World War II to unify the continent, has been rocked by the economic downturn, the debt crisis, rising nationalism and difficult issues like immigration. Can the 27-nation EU find a new sense of mission?