Accessibility links
Containing Chaos: Somalia Today Somalia has suffered from decades of civil war. Now, African Union troops are there trying to protect a weak, U.S.-backed government from Islamist insurgents, al-Shabab, who want to create a strict Islamic state in the country.

Few Traces Of Past Glory In Mogadishu

October 7, 2010 • A high-speed tour of the city does not include famous landmarks that inspire national pride. Instead, it's filled with what used to be and places where terrible things happened.

Few Traces Of Past Glory In Mogadishu 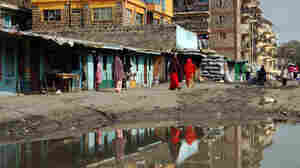 Eastleigh, an area in Nairobi, Kenya, is known as "Little Mogadishu." It's a Somali neighborhood of mud roads, open sewers and intrigue where the militant group al-Shabab is trying to recruit people to its efforts to create a strict Islamist state in Somalia. Frank Langfitt/NPR hide caption

October 6, 2010 • Eastleigh, an area in Nairobi, Kenya, is home to tens of thousands of refugees from neighboring Somalia. Known as "Little Mogadishu," Eastleigh is becoming a new recruiting ground for al-Shabab, the militant group that aims to create a strict Islamist state in Somalia. 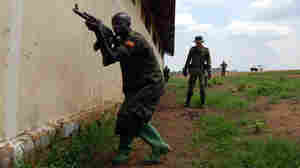 European soldiers are training 2,000 Somalis to help build a national army to defend a weak, Western-backed government in Mogadishu, Somalia. Here, a European soldier participates in the training of a Somali recruit at a training camp in remote Uganda. Frank Langfitt/NPR hide caption

Building An Army In Somalia, Teaching It To Fight

October 5, 2010 • Since April, European Union soldiers have been training Somali recruits to fight Islamist insurgents trying to topple their country's beleaguered government. The trainers are finding that the soldiers -- whose salaries are paid by the U.S. -- have a lot to learn about warfare.

Building An Army In Somalia, Teaching It To Fight 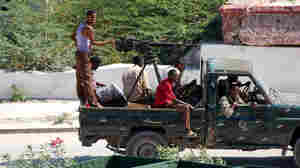 African Union troops are trying to bring stability to war-ravaged Somalia. They are locked in battle with al-Shabab, Islamist militants who claim ties with al-Qaida. Here, militiamen in Mogadishu, Somalia's capital, ride in a "technical" -- a pickup truck outfitted with weapons. This militia supports the African Union and local government troops. Frank Langfitt/NPR hide caption

October 4, 2010 • Mogadishu, Somalia's capital, is a front line in the global war against radical Islam. A group known as al-Shabab that claims links to al-Qaida wants to create a strict Muslim state. About 7,000 African Union peacekeeping troops are trying to stop them.

Peacekeepers, Islamists Battle For The Soul Of Somalia

The view of the beach from an abandoned hotel in Mogadishu. Frank Langfitt hide caption

Not The Best Vacation Destination: Mogadishu

October 4, 2010 • NPR's Frank Langfitt just returned from Mogadishu, Somalia. One of the things that stunned him about the war torn country was how beautiful it was.