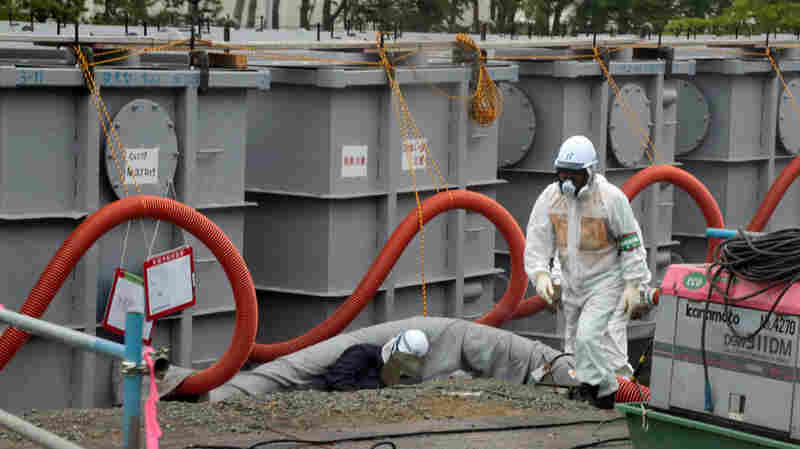 July 25, 2013 • Water in all its forms has caused trouble at the ruined Fukushima nuclear plant this week. They are reminders that the problems are far from over. 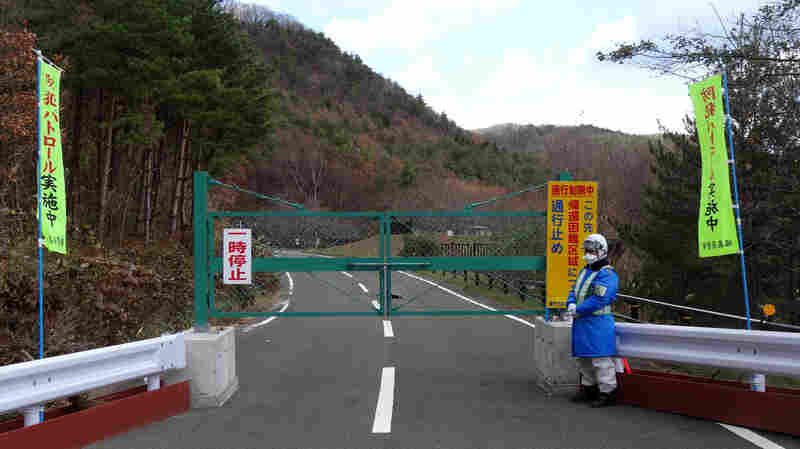 A road leading back to the Togawas' old home in the seaside village of Namie is closed due to radioactive contamination. Geoff Brumfiel/NPR hide caption

Depression And Anxiety Could Be Fukushima's Lasting Legacy

March 11, 2013 • Kenichi Togawa was working at the Fukushima Dai-ichi nuclear power plant in Japan the day the earthquake and tsunami struck. His family is still living in temporary housing. For many people, the stress and isolation brought on by the disaster could pose more persistent hazards than the radiation.

Depression And Anxiety Could Be Fukushima's Lasting Legacy 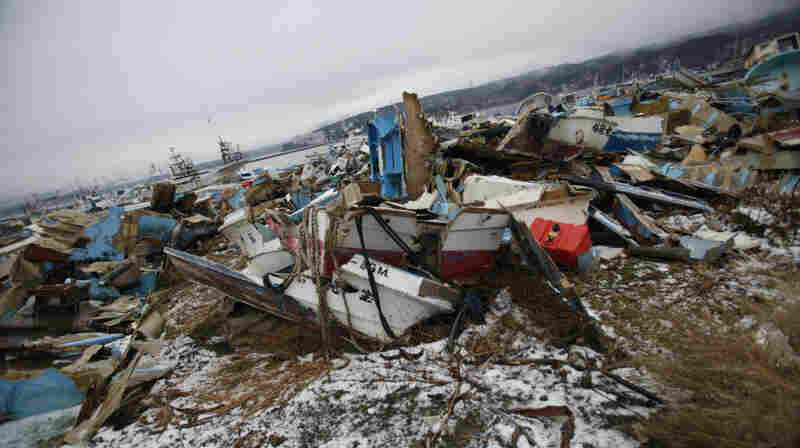 March 12, 2012 • The northeast coast of Japan has an older population, fewer jobs and more tsunamis than the rest of the country. The regional economy had been declining long before last year's disaster. Many people say in order to survive, the region needs to remake itself. 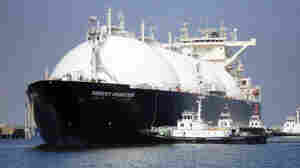 March 11, 2012 • All of Japan's nuclear power plants will be offline by April and might never restart. That's forcing the country to increase its reliance on coal, oil and natural gas. This could cost the country an extra $100 million per day and significantly increase carbon dioxide emissions. 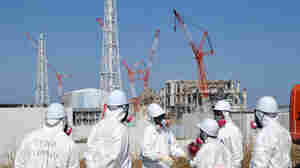 March 9, 2012 • Though the immediate nuclear crisis in Japan has passed, the process of securing and stabilizing the radioactive materials from the melted-down reactors will be a long, expensive slog. Recovery workers will also need to decontaminate the area surrounding the plant. 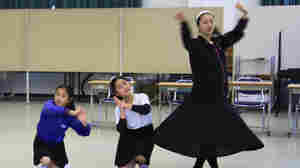 For Kids In Japan, Adjusting To A Changed World

March 9, 2012 • A year after the earthquake and tsunami that killed almost 20,000 people in northeast Japan, schoolchildren are moving on, but have not forgotten. The students and their teachers talk about the effect the quake and its aftermath has had on them.

For Kids In Japan, Adjusting To A Changed World 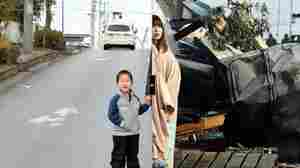 Yuko Sugimoto (right) stands reunited with her 5-year-old son, Raito, on a road in Japan's Miyagi prefecture, 2012. This photo was taken at the same place where she was photographed immediately after the tsunami in March 2011. Toru Yamanaka and Roslan Rahman/AFP/Getty Images hide caption

March 9, 2012 • Interactive photos show continuity and change in Japan since the tsunami struck one year ago. 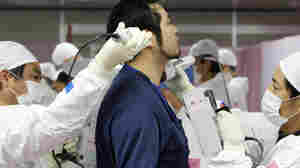 March 9, 2012 • Experts say health effects from the radiation released by last year's nuclear disaster will be minimal. But the lasting psychological trauma from the tsunami, including the loss of life and livelihoods, will be an ongoing struggle. 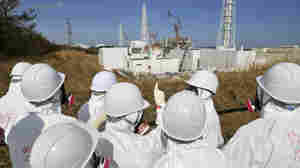 Members of the media, wearing protective suits and masks, visit the tsunami-crippled Fukushima nuclear power station during a press tour, in northeastern Japan's Fukushima prefecture, Feb. 28. Japan is marking the first anniversary of the March 11 tsunami and earthquake, which triggered the worst nuclear accident in the country's history. Kimimasa Mayama/AP hide caption

March 9, 2012 • A new independent report on the Fukushima nuclear accident found that a far worse meltdown — one that could have forced the evacuation of Tokyo's 30 million people — was narrowly avoided. It also suggests that Japan also suffered a failure of government regulation, supervision and response. 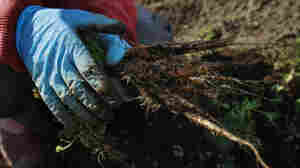 A woman picks carrots on her farm as she explains her fears that no one will buy them since the radiation fallout in March 2011 in Fukushima, Japan. A year later, challenges persist for farmers in the region. Wally Santana/AP hide caption

March 8, 2012 • Radiation still leaks from the Fukushima Dai-ichi nuclear plant in northeast Japan after last year's meltdowns. The continuing threats from the disaster go beyond contamination: For farmers, uncertainty can also be toxic. 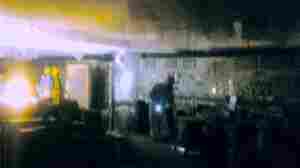 February 28, 2012 • A small group of engineers, soldiers and firemen risked their own lives to help prevent a complete meltdown after the quake and tsunami hit. Investigative reporter Dan Edge chronicles the aftermath of the disaster in a new Frontline documentary. 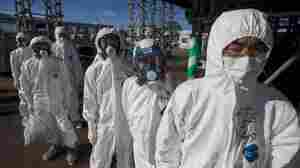 December 16, 2011 • If correct, it's an important milestone in the long effort toward recovery from the nuclear disaster triggered by a March 11 earthquake and tsunami. But skeptics fear the government's claim is premature. 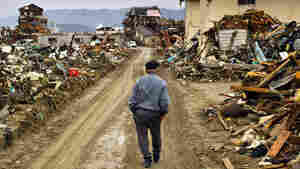 A 9.0-magnitude earthquake struck Japan offshore on March 11, setting into motion a tsunami that engulfed large parts of northeastern Japan and triggered a nuclear meltdown at a power plant in Fukushima. On March 26, a man walks among debris in Rikuzentakata, Iwate Prefecture, Japan. Athit Perawongmetha/Getty Images hide caption

September 13, 2011 • Six months after the accident at the Fukushima nuclear plant, the Japanese government has declared eight areas near the reactors as potential no-go zones for the next two decades. Many residents remain homeless. Beyond the hot zone, many people have decided to stay, but are worried about elevated radiation levels. 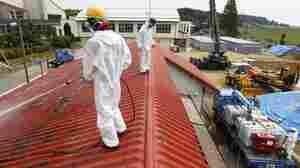 Workers decontaminate the roof of a kindergarten about 12 miles from the crippled Fukushima nuclear plant in Japan last month. Several hundred Japanese seniors have volunteered to take part in the cleanup effort. Hiro Komae/AP hide caption

September 12, 2011 • Since Japan's nuclear accident in March, about 500 Japanese seniors have signed up to work at the dangerous plant. They say it's better that they risk their lives than the younger workers at a job that has been called courageous — and suicidal. 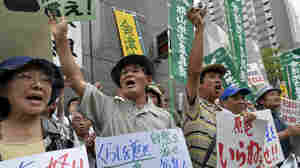 Farmers whose crops were ruined by a nuclear accident protest Aug. 3 at the Tokyo Electric Power Co. Many Japanese are calling for the country to lessen its dependence on nuclear power following the accident six months ago. Yoshikazu Tsuno/AFP/Getty Images hide caption

September 6, 2011 • The Japanese public is demanding that the country move away from nuclear power and toward renewable sources of energy. But it's a tall task for a country with few resources. 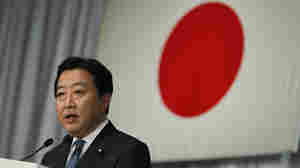 Finance Minister Yoshihiko Noda was chosen leader of the ruling Democratic Party of Japan on Monday. That all but ensures his selection as Japan's next prime minister. Hiro Komae/AP hide caption

August 29, 2011 • Japan looks set to get a new prime minister as early as Tuesday. But in a country that has been plagued by years of economic stagnation and a major disaster this spring, few are expecting a quick turnaround in the country's fortunes. 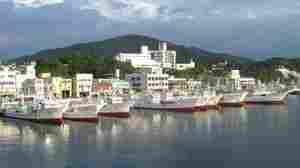 Most of Kesennuma's large fishing boats either survived the tsunami or have been repaired. But many do not move from the dock, because most of the city's fish-processing factories still lie in ruins. Frank Langfitt/NPR hide caption

August 24, 2011 • Five months after a tsunami decimated Japan's northeast coast, one of the region's largest fishing ports is trying to get back to work. But the earthquake changed the landscape, complicating plans to rebuild. 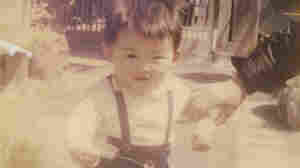 August 19, 2011 • Many Japanese families on the country's northeast coast lost everything in the March tsunami — homes, businesses and loved ones. But in the rubble, survivors found many priceless family photos. One U.S. group is now working to repair the photos damaged in the disaster.

Japanese Prime Minister Naoto Kan speaks during a news conference in Tokyo in May. The beleaguered leader is expected to step down in coming weeks. Koji Sasahara/AP hide caption

July 27, 2011 • For months, critics have called for the resignation of Japan's much-unloved prime minister, Naoto Kan. The frailty of the country's leadership reflects the fact that Japan has yet to enjoy a fully democratic political system. 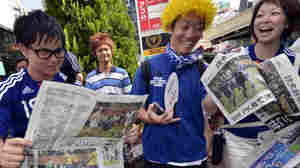 July 18, 2011 • There's no shortage of reports about how important the victory in women's soccer was across the Pacific in a nation still recovering from the devastating March 11 earthquake and tsunami. Does losing to Japan ease the pain for U.S. fans? 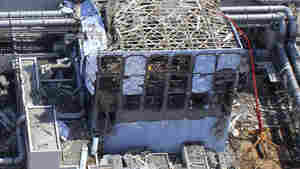 This March 24 aerial photo shows the extent of damage at the Fukushima Dai-ichi nuclear power plant in Japan. The 40-foot-tall tsunami destroyed the electrical and cooling systems, resulting in meltdowns at some of the reactors. Air Photo Service/AP hide caption

June 20, 2011 • In new reports, the International Atomic Energy Agency and the Japanese government highlight the hazardous working conditions, lack of communication and last-ditch efforts by workers to contain meltdowns at the Fukushima Dai-ichi nuclear power plant in Japan. Early confusion among the leadership was also a problem.

June 15, 2011 • Those parents say the government should be evacuating everyone 18 and under and any woman who is pregnant, not waiting three more months and then only issuing badges that will be checked one a month to determine exposure. 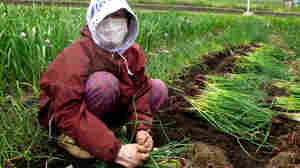 Nisaka Mieko gathers chives, which have been contaminated by radiation from the Fukushima nuclear reactor accident. She says she may lose $25,000 in crops, and hopes to plant some of the seeds next year. Louisa Lim/NPR hide caption

June 8, 2011 • Radiation levels in one Japanese village are twice the level requiring evacuation, but some farmers are still trying to salvage what they can of their crops and livestock. "If you've got 600 cows, it's not that easy to get rid of them," one resident says. 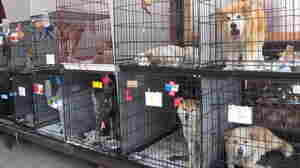 The Japan Animal Rescue shelter in Samukawa houses about 200 dogs and cats, most of them brought in from the now off-limits area around the Fukushima Dai-ichi nuclear power plant. Brian Naylor/NPR hide caption

May 12, 2011 • Tens of thousands of pets are homeless following the disaster in Japan. Many have been taken in by animal rescue groups — some rescuers have even sneaked into the nuclear exclusion zone to remove animals. Despite the risk of radiation, "we have to do this because dogs are dying," one rescuer says.

A worker checks the status of the water level at the Unit 1 reactor at the Fukushima Dai-ichi nuclear power plant in Japan on Tuesday. Japanese officials said the reactor doesn't appear to be holding water, which means its core probably sustained more damage than originally thought. TEPCO/AP hide caption

May 12, 2011 • The U.S. Nuclear Regulatory Commission is in the midst of a 90-day review to see whether U.S. reactors are vulnerable to catastrophic failure based on what has been learned from Japan. At a hearing Thursday, an official said the agency had not identified any major issues; however, the wisdom of voluntary guidelines for severe accidents was questioned.