Accessibility links
The Federal Budget Crunch The debate over the federal budget and how much to cut has pitted the Republicans and the Democrats against each other. 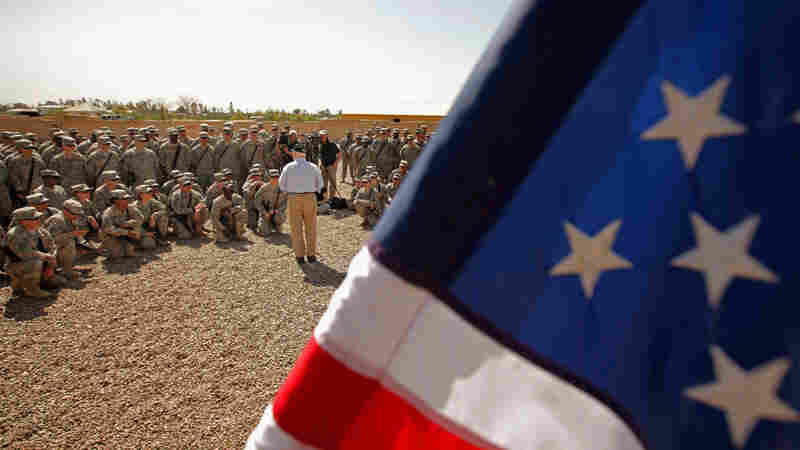 April 30, 2011 • As Congress and the White House set a higher priority on cutting the budget deficit, a retired military man sees ways to reap major savings. In a plan he acknowledges as "somewhat radical," former Army Col. Douglas Macgregor proposes slashing the defense budget by 40 percent in just three years.

April 29, 2011 • Vice President Joe Biden begins negotiations next week with House and Senate leaders on a deficit reduction framework. The White House hopes the talks will persuade Congress to raise the ceiling on the federal debt. If the debt limit isn't raised by early July, the U.S. could default on its financial obligations for the first time in history. 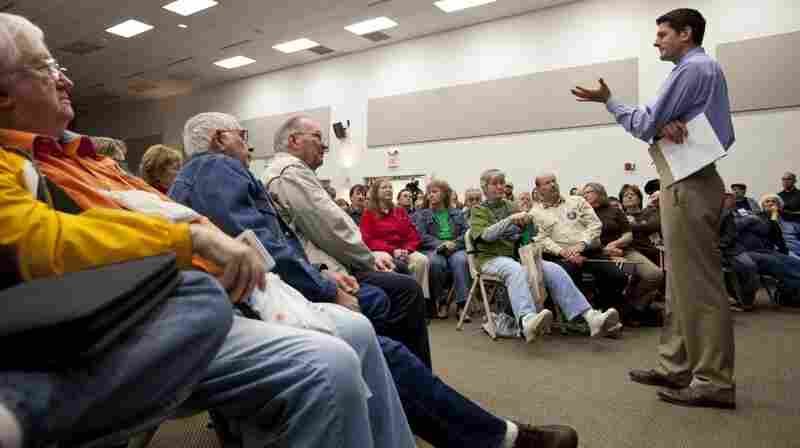 Rep. Paul Ryan (R-WI) speaks during a public meeting Tuesday at Gateway Technical College in Kenosha, Wis. His plan to fundamentally restructure Medicare and cut social safety net programs like food stamps and Medicaid has at times been a tough sell as its supporters head home and meet with their constituents. Jeffrey Phelps/AP hide caption

April 27, 2011 • House Budget Committee Chairman Paul Ryan has drawn huge crowds at listening sessions in his Wisconsin district. While a few constituents have asked him to run for president in 2012, others have raised a slew of concerns, from what will happen to their medical coverage to Ryan's plan to cut taxes for the wealthy. 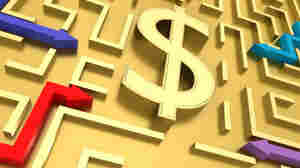 April 22, 2011 • The budget proposals from President Obama and House Budget Committee Chairman Paul Ryan are filled with claims about reducing deficits, spurring economic growth and cutting spending. But they're often not particularly reliable or well-founded. Experts explain how to read the numbers to find out what's really going on.

Standard And Poor's Role In A Post-Crisis World

Standard And Poor's Role In A Post-Crisis World 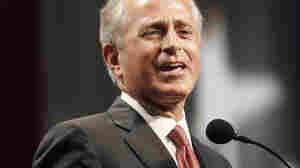 April 19, 2011 • For months, lawmakers have known that the nation is on the way to hitting the debt ceiling, and news that credit rating agency Standard and Poor's has lowered its outlook on U.S. borrowing only puts more pressure on the coming debate. Now, lawmakers are weighing their options in the face of another high-stakes vote. 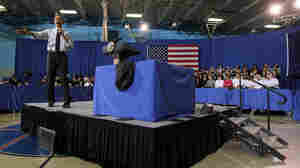 April 19, 2011 • In his first public forum since he laid out his deficit plan in a speech last week, the president defended his proposal to roll back Bush-era tax cuts for high earners, and said he would not gut spending on education, infrastructure and research.

April 18, 2011 • The credit rating company Standard & Poor's has issued a negative warning on the triple-A credit rating of the United States. S&P says the U.S. has not come up with a credible plan to address fast-rising deficits and mounting debt. S&P warns there's a 1-in-3 chance that it could downgrade the U.S. top credit rating within two years. Markets were down sharply on the news. 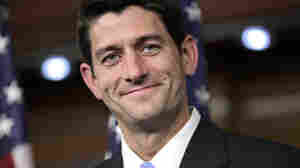 April 16, 2011 • The president and the Republican chairman of the House Budget Committee were on opposite sides of a heated debate this past week over the best way to cut the federal deficit. But there's one thing Obama and Congressman Paul Ryan agree on: They both want to overhaul the corporate tax code. 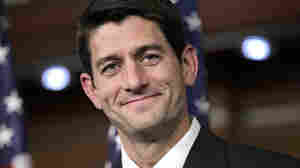 April 16, 2011 • House Republicans passed their 2012 budget Friday without a single Democrat voting for it. Its prospects in the Democratically controlled Senate appear dim at best, but it will likely provide plenty of fodder for next year's campaigns.

April 15, 2011 • Robert Siegel speaks with our regular political commentators, E.J. Dionne of The Washington Post and Brookings Institution, and David Brooks of The New York Times.

April 15, 2011 • The House passed a 2012 budget resolution Friday in a partisan vote of 235-193 with four Republicans dissenting. The blueprint, put forward by Budget Committee Chairman Paul Ryan, would reduce spending by trillions of dollars over the next decade, in part by overhauling Medicare and Medicaid. It's a non-starter in the Senate — but a benchmark for the conservative majority in the House, which will have to convince voters that fiscal discipline trumps a popular entitlement. 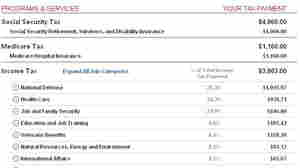 This Receipt Tells You Where Your Tax Dollars Go

April 15, 2011 • The White House launched an official taxpayer receipt today. You enter how much you paid in taxes, and the receipt tells you where your money went. 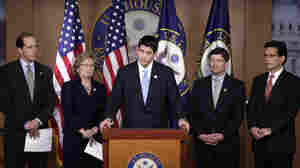 House Budget Committee Chairman Paul Ryan of Wisconsin, pictured with fellow Republicans at a news conference, said this week that "the biggest threat to Medicare is the status quo and the people defending it." Carolyn Kaster/AP hide caption

April 15, 2011 • The nonbinding measure calls for dramatically revamping Medicaid and Medicare to pare trillions of dollars over the next decade. But it stands little chance of even reaching a vote in the Senate. Instead, it is likely to serve as an opening salvo in the debate over America's fiscal future and the 2012 election. 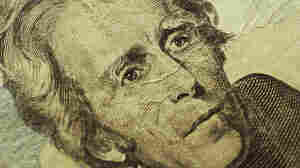 When U.S. Paid Off National Debt (Why It Didn't Last)

April 15, 2011 • Andrew Jackson really hated debt. So in 1835, under Jackson's leadership, the U.S. paid off the debt. Here's the story of how it happened — and why we started borrowing again a year later.

April 14, 2011 • The bipartisan legislation makes $38 billion in spending cuts to see the government through the rest of the fiscal year. The Senate voted 81-19 on Thursday to support the measure, not long after the House gave its approval, 260-167.

Activists On The Right Sense Their Time Has Come

April 14, 2011 • House Speaker Boehner lost a quarter of his own Republican members Thursday afternoon in the critical vote to fund the government through September. They refused to vote for what would normally be considered historic cuts in the federal budget — and they did so because they believed even deeper cuts were both necessary and possible. That reflects a surging confidence among activists on the right who sense their time has come.

Activists On The Right Sense Their Time Has Come

April 14, 2011 • President Obama says in making the tough decisions to address the nation's deficit, everything should be on the table — and all ideas are welcome. But Republican Rep. Paul Ryan says that's not the message he got Wednesday.

April 14, 2011 • Robert Siegel talks with Rep. Paul Ryan, chair of the House Budget Committee, about his budget plan for 2012 — and about President Obama's plan for debt reduction. 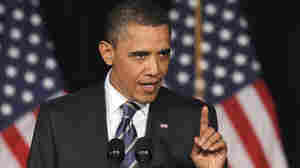 April 14, 2011 • President Obama outlined a plan to reduce the government deficit through a mix of spending cuts and tax hikes. His plan will go up against another blueprint put forward last week by Republican Rep. Paul Ryan. Though they both seek $4 trillion in reductions, the plans differ dramatically.

April 14, 2011 • President Obama presented his plan for reducing the deficit Wednesday. And on the Republican side, Rep. Paul Ryan of Wisconsin released a plan last week. Rep. Dave Camp of Michigan, chairman of the House Ways and Means Committee, tells Renee Montagne what Republicans hope to accomplish with their spending plan.

April 14, 2011 • Many Republicans were praising Rep. Paul Ryan's budget plan when he announced it last week. But now, some GOP lawmakers are not sure if they really want to commit to fundamentally changing Medicare and Medicaid.

April 14, 2011 • President Obama laid out his plan for long term deficit reduction Wednesday. He largely embraced the goals of his deficit commission — calling for $4 trillion in cuts and tax hikes over 12 years.