Accessibility links
Living Large: Obesity In America In a series, NPR looks at how life is changing in a country where tens of millions of people are obese — in the home, at the grocery store, in the doctor's office, on the factory floor and at the airport. 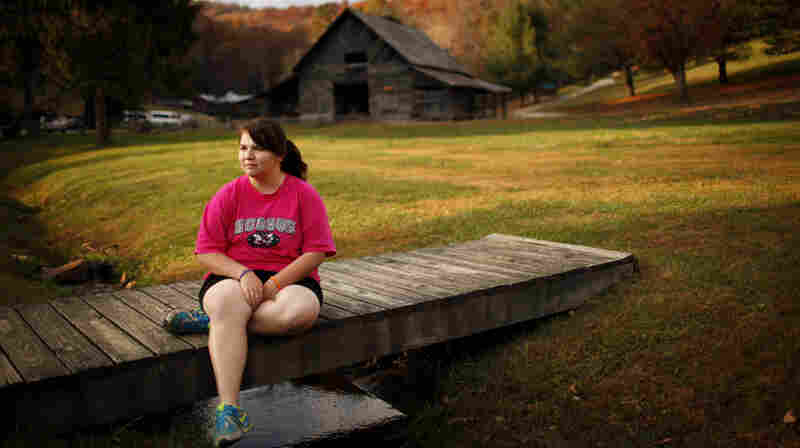 December 13, 2011 • For many students at Wellspring Academy in N.C., two months at this weight-loss boarding school have transformed them. Those who trailed behind their parents to check in back in August now own the campus. Kids who had watched from the sidelines while others exercised have turned into exercisers. 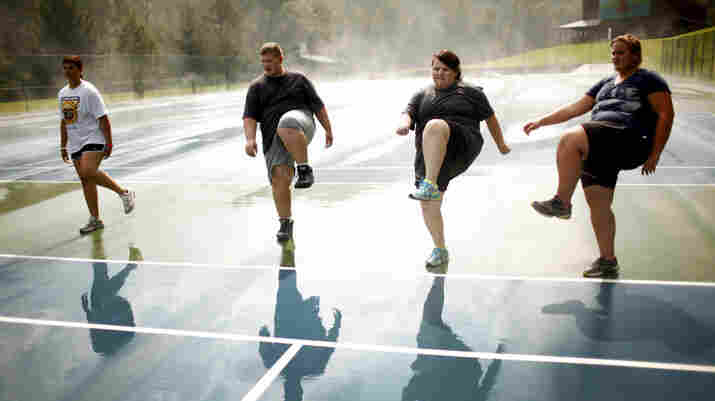 Wellspring students do high steps on the tennis court. Exercise is paramount at Wellspring, and a little rain doesn't get in the way of outdoor activities. Travis Dove for NPR hide caption

School Transforms Teens' Lives, One Pound At A Time

December 12, 2011 • In a nation where child obesity rates are soaring, some parents are turning to a boarding school that focuses on both weight loss and academics. The goal: to rewire students' eating and exercise habits to ensure they live long and healthy lives. The kids find it a challenge — but totally worth it.

School Transforms Teens' Lives, One Pound At A Time 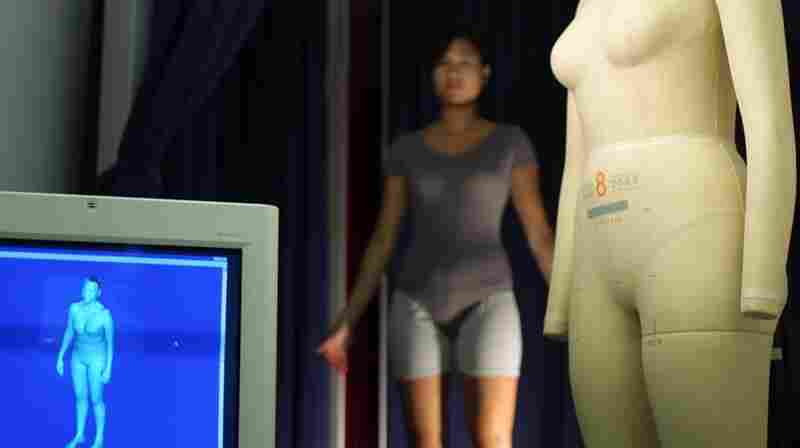 Alvanon is the largest maker of mannequin body forms in the world. The Manhattan-based company uses a device called AlvaScan to create these forms — which are then used to create clothing sizes. "We are so diverse that in any given size, there are probably four or six different body types that are represented," says the company's president, Ed Gribbin. Courtesy of Alvanon hide caption

From Body Scan To Body Form: Sizing A Clothing Line

December 11, 2011 • Are you size 4? A 6? An 8? Often women don't know — and can actually be all those sizes without gaining or losing an ounce. A clothing size and fit consulting firm works with brands to expand the number of people it can dress by focusing on not only size numbers but also body shapes. 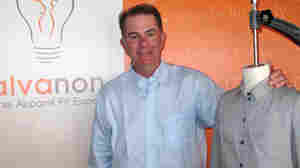 Ed Gribbin, head of Alvanon, says spandex is a "democratic" fiber because it morphs to the body as opposed to limiting it. Marisa Penaloza/NPR hide caption

December 11, 2011 • Spandex may make you think of disco or workout gear. But because this wonder fiber can stretch more than a 100 percent and snap right back to shape, its claim to fame may just be that it has clothed Americans as obesity rates have soared. 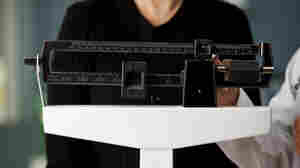 Why Doctors And Patients Talk Around Growing Waistlines

November 14, 2011 • In a country with a rampant obesity epidemic, many patients say their doctors don't spend enough time talking with them about losing weight. But doctors often complain that when they do bring up the issue, nothing changes. 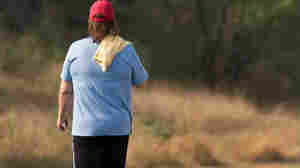 October 31, 2011 • Most people who lose weight end up gaining it back — and it's not just a matter of willpower. In fact, once we begin to shed those first few pounds, says one expert, "the biology really kicks in and tries to resist the weight loss." 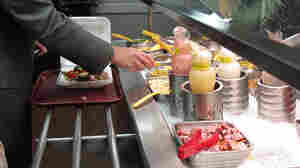 October 28, 2011 • Companies are trying to bring down their spiraling health care costs by helping employees lose weight. At Dow Chemical, managers hope to set an example by hitting the corporate gym at midday, and the company offers weight-management classes on demand, at workers' convenience. 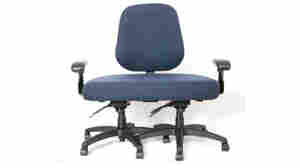 October 27, 2011 • From cubicle farms to auto factories, accommodating larger and heavier employees has become a fact of life. One in three U.S. adults is obese, and researchers say the impact on business can be boiled down to a number: $1,000 to $6,000 in added cost per year for each obese employee. 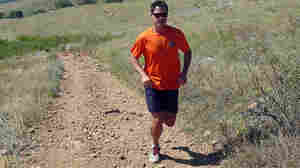 Ryan Van Duzer, an outdoor enthusiast who has starred in reality TV adventure shows, visits Colorado schools to talk about how working out can be entertainment. He says he often leaves frustrated after kids tell him about staying inside playing video games. Kirk Siegler for NPR hide caption

October 5, 2011 • Though Colorado is often held up as the model of a healthy lifestyle, the state isn't immune to the obesity crisis. One in four children is either overweight or obese. "This is a major problem," says one state health official. "We are far from setting the model of where we want to be."

The Thinnest State Loosens Its Belt 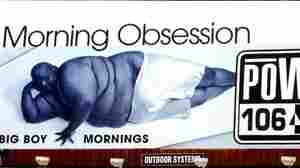 October 1, 2011 • One of the fastest growing segments of the weight-loss market is surgery. But doctors warn that it should not be seen as a quick fix. Indeed, though surgery can help with diabetes and high blood pressure, some patients struggle with health issues even years after going under the knife. 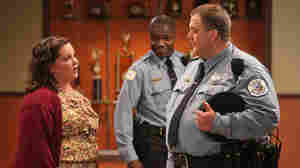 September 21, 2011 • While many obese people lead happy and healthy sex lives, counselors and therapists are seeing more obese clients with problems in the bedroom. A pattern is clear: Obese people are more dissatisfied with their sexual lives, and women seem to suffer the most. 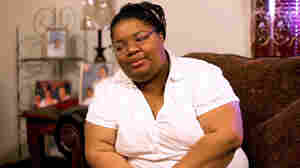 Valerie Moore's weight and poor eating habits caught up with her two years ago, when she had a stroke at age 26. Dave Anderson Photography hide caption

Tackling Obesity Amid Poverty In A Miss. County

August 9, 2011 • Holmes County is the most obese county in Mississippi, the most obese state. The county is also among Mississippi's poorest. Officials are trying to get families to make healthier choices, and a co-op that farms the fertile Delta land is trying to steer residents toward fresh food.

Tackling Obesity Amid Poverty In A Mississippi County 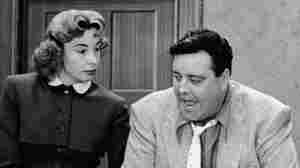 August 8, 2011 • From The Honeymooners to The Biggest Loser, television has rarely dealt sensitively with issues of weight. As part of an ongoing series on obesity in America, Alex Cohen explores the limited number of roles for overweight actors — from "bumbling husband" to "sassy best friend." 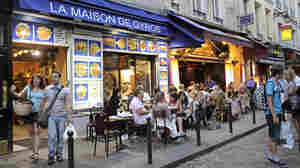 French Are Getting Fatter, Too

August 6, 2011 • Obesity rates in France are growing, though they're still far below those in the United States and other European countries. Some say the French culinary traditions that have protected most people from obesity are under assault.

The French Are Getting Fatter, Too 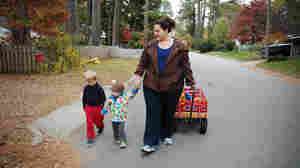 As part of her exercise routine, Curtis starts most mornings walking a gaggle of neighborhood toddlers to their day care. Tovia Smith/NPR hide caption

July 25, 2011 • Kara Curtis is one of 70 million obese Americans, and the issue dominates her life. Curtis, 37, has seen every dress size from 26 to 6. Despite countless diets and untold resources spent on fitness, she says, "I'm morbidly obese. And it's just overwhelming." 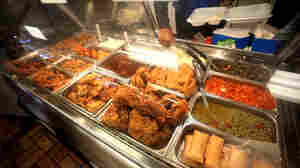 May 19, 2011 • A new collaboration with Oxford American magazine spotlights the South, starting with a dispatch from the most obese county in the U.S. 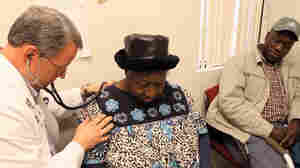 May 19, 2011 • Roughly 1 in 3 adult Americans is now obese. And ground zero for the nation's obesity battle is Mississippi — where 7 of 10 adults in the state are either overweight or obese. The problem is most pronounced in Holmes County — the poorest and heaviest in the state.

Obesity In America, By The Numbers

May 19, 2011 • What does it mean to live in a nation where one 1 of every 3 people is obese? In countless ways, obesity is changing the way we work, live, eat and travel. Here, a sampling of some of those changes.