Accessibility links
Leaving Iraq After nearly nine years, the removal of Saddam Hussein and the death of more than 4,000 U.S. troops, the U.S. exits Iraq. What kind of country does it leave behind?

December 27, 2011 • During the Iraq War, the U.S. military employed tens of thousands of Iraqis, many of whom were branded traitors. Now, the U.S. troops are gone. But some of those Iraqis have been left behind — in danger and desperately awaiting American visas so they and their families can leave.

December 18, 2011 • Paul Bremer headed the Coalition Provisional Authority in Iraq and was seen as one of the chief architects of how much of the war played out. Today, he stands by his decisions but believes the U.S. pullout of troops in premature. 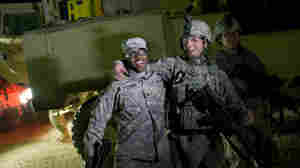 U.S. soldiers celebrate as the first vehicles of the last U.S. military convoy carrying troops out of Iraq passes through the K-Crossing at Iraq's border with Kuwait early on Sunday morning. Martin Bureau/AFP/Getty Images hide caption

December 18, 2011 • There were a lot of lasts at Contingency Operating Base Adder in southern Iraq as U.S. troops prepared to leave: the last briefing, the last patrol, the last hot meal. The base was the main staging ground for all troops exiting the country, and it was the last U.S. base to close.

The IED: The $30-Bombs That Cost The U.S. Billions

December 17, 2011 • Homemade bombs became the weapon of choice for the insurgency in Iraq. The U.S. has officially declared the end of the war, but one lasting legacy will be how the improvised explosive device, or IED, changed the way the military thinks about warfare.

The IED: The $30-Bombs That Cost The U.S. Billions 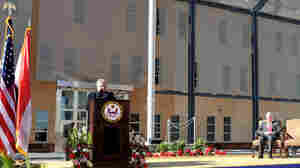 Iraqi President Jalal Talabani speaks at the opening of the huge U.S. Embassy in Baghdad on Jan. 5, 2009. It is the largest U.S. Embassy in the world. Handout/Getty Images hide caption

December 17, 2011 • The American military contingent in Iraq is being replaced by a huge diplomatic contingent. All together, some 16,000 diplomats and private contractors will be working at the embassy in Baghdad and at consulates in Iraq, making it the largest such operation in any country. 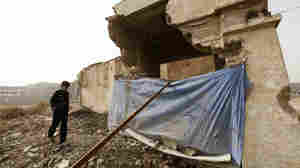 Makeshift houses in Baghdad are the only homes some internally displaced Iraqis know. Many are too afraid to go back to their original homes; for them, the threat of being targeted is still very real. Mohammed Ameen/Reuters /Landov hide caption

December 17, 2011 • As American troops pull out of Iraq, one of the most striking consequences of the war remains unresolved: the issue of people who were forced out of their homes and still can't go back. 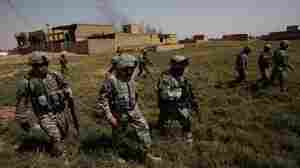 Gen. David Petraeus (center, with no gun) walks with troops in 2007 in Baqouba, Iraq. The area had recently been seized back from al-Qaida control with help from U.S. forces who were part of the surge. The surge is widely credited with changing the course of the war; now, some experts are debating how much credit it deserves. Chris Hondros/Getty Images hide caption

December 16, 2011 • When 30,000 additional U.S. troops entered Iraq in 2007, the tide of the war turned. The surge was widely credited — but was it the only cause, or even the main one? Some argue that Iraq's Sunnis had already decided to work with the U.S. rather than fight against it, and that this changed the course of the war. 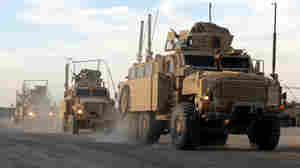 A U.S. convoy departs from Contingency Operating Station Kalsu, a U.S. base about 60 miles south of Baghdad. For many U.S. troops, it is the last stop in Iraq on the way out of the country. Sean Carberry/NPR hide caption

U.S. Flag Comes Down, And Iraq War Is Officially Over

December 15, 2011 • Nearly nine years after U.S. forces stormed into Iraq, American involvement in the war ends with a flag-lowering ceremony attended by Defense Secretary Leon Panetta. Only a few thousand U.S. troops remain, and they are to leave within days.

U.S. Flag Comes Down, And Iraq War Is Officially Over 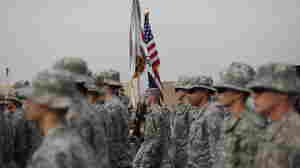 The American flag, Iraqi flag, and the U.S. Forces Iraq colors are carried during ceremonies in Baghdad today marking the end of the U.S. military mission in Iraq. Pablo Martinez Monsivais/pool/AP hide caption

December 15, 2011 • In a low-key ceremony at the Baghdad airport, Defense Secretary Leon Panetta and others marked the occasion. After nearly nine years of war and the deaths of 4,500 U.S. military personnel, almost all troops have left the country. 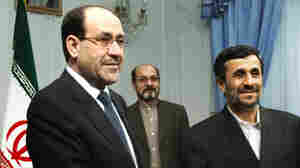 How Much Influence Will Iran Have In Iraq?

December 14, 2011 • As U.S. troops depart Iraq, many observers assume the country will fall into lockstep with its powerful Shiite neighbor to the east, Iran. But, at least in the short term, other countries in the region are expected to keep Iran in check, and Turkey is already playing a significant economic role.

How Much Influence Will Iran Have In Iraq? 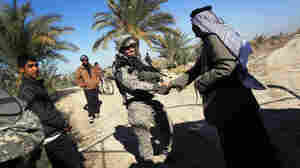 December 14, 2011 • As the final U.S. troops prepare to leave, Iraq remains divided politically. Despite the country's oil wealth, its economy is weak. And U.S. officials are concerned about the role that Iran will try to play in Iraq. 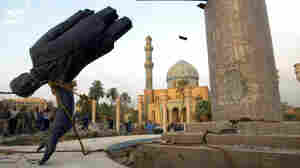 Timeline: The U.S. And The War In Iraq

December 14, 2011 • The withdrawal of the last U.S. troops from Iraq in December 2011 ends a nearly nine-year conflict that saw the ouster of dictator Saddam Hussein and the death of more than 4,000 U.S. troops. Iraq now has an elected government and violence is down, but it still faces an uncertain future. 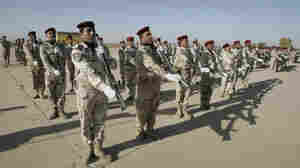 Iraqi soldiers take part in a graduation parade in Kirkuk on Monday. The oil-rich city is a mix of Kurds, Arabs, Turkmen and others. Its future status is a source of tension within Iraq. Marwan Ibrahim/AFP/Getty Images hide caption

December 14, 2011 • Oil-rich Kirkuk is a complicated ethnic mix of Kurds, Arabs, Turkmen and others. The question of whether it belongs to the autonomous Kurdish region in the north or to the Arab-dominated central government of Baghdad has long been a point of contention. The U.S. military served as mediators among the factions. 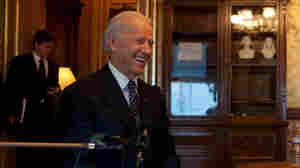 Biden: Iraq Will Be A Partner; History Will Judge If War Was Worth It

December 13, 2011 • "We're looking for a stable, democratic government that is not beholden to anyone in the region and is able to be secure within its own borders," the vice president told NPR, and he sees that happening in Iraq.

Biden: Iraq Will Be A Partner; History Will Judge If War Was Worth It 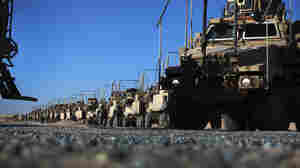 A day after leaving Iraq last week, U.S. Army soldiers from the 1st Cavalry Division lined up their armored vehicles near Kuwait City, Kuwait. Armored equipment will not stay behind after troops leave Iraq, but other property may. Joe Raedle/Getty Images hide caption

U.S. Troops (But Not Their TVs) Prepare To Leave Iraq

December 13, 2011 • As the U.S. wraps up its military presence in Iraq, officials are facing the huge logistical challenge of pulling out after nearly nine years. As bases are transferred to Iraqi control, it's cheaper to leave some equipment behind rather than ship it home.

U.S. Troops (But Not Their TVs) Prepare To Leave Iraq

Troop Pullout Not The End Of U.S. Presence In Iraq

December 13, 2011 • U.S. forces will leave Iraq by January 2012, but with thousands of diplomats and contractors remaining in the country, the U.S. presence will remain strong in the months ahead. Commentator Ted Koppel shares what he observed in a recent reporting trip to Basra, Iraq.

Troop Pullout Not The End Of U.S. Presence In Iraq 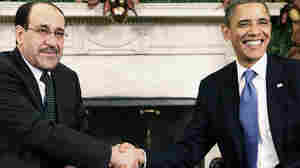 Iraqi Prime Minister Nouri al-Maliki shakes hands with President Obama in the Oval Office at the White House on Monday. The two leaders met as the U.S. prepares to withdraw the last of its combat troops from Iraq. Chip Somodevilla/Getty Images hide caption

December 12, 2011 • U.S. combat troops will soon be out of Iraq completely. But in a meeting with President Obama Monday, Iraqi Prime Minister Nouri al-Maliki said a continued presence in his country is essential. The two sides pledged to maintain strong ties, but nagging concerns about security and neighboring Iran remain. 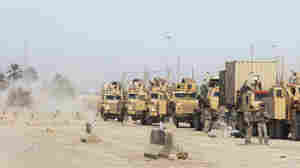 A convoy of soldiers from the 82nd Airborne line up at Contingency Operating Station Kalsu, a U.S. base about 60 miles south of Baghdad. For many U.S. troops, it is the last stop in Iraq on the way out of the country. Sean Carberry/NPR hide caption

A Way Station On The Road Home From Iraq

December 11, 2011 • For many U.S. troops leaving Iraq, a U.S. base south of Baghdad, is the last stop they make before rolling into Kuwait and heading home. As the Dec. 31 deadline for the U.S. withdrawal from Iraq approaches, soldiers reflect on the end of their war.

In The Iraqi Desert, A Way Station On The Road Home 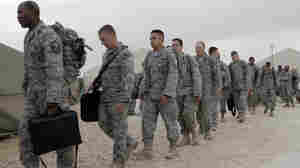 U.S. servicemen line up to board a bus as they begin their journey home at Al Asad Air Base west of Baghdad, Iraq, on Nov. 1. The U.S. has promised to withdraw from Iraq by the end of the year as required by a 2008 security agreement between Washington and Baghdad. Some 39,000 U.S. troops are scheduled to clear out along with their equipment. Khalid Mohammed/AP hide caption

November 29, 2011 • Tim Arango, the Baghdad bureau chief for The New York Times, shares personal stories from his time covering the war, including how he tracked down the subject of a famous photograph. He also talks about what the U.S. troop withdrawal means for the future of Iraq — and what will happen after the troops are gone.