Accessibility links
American Dreams: Then And Now The "American Dream" is a key thread in this country's tapestry, woven through politics, music and culture. Though the phrase means different things to different people, it suggests an implicit contract that if you work hard, you'll move ahead. But as the effects of the economic downturn continues to reverberate, where is the American Dream today? 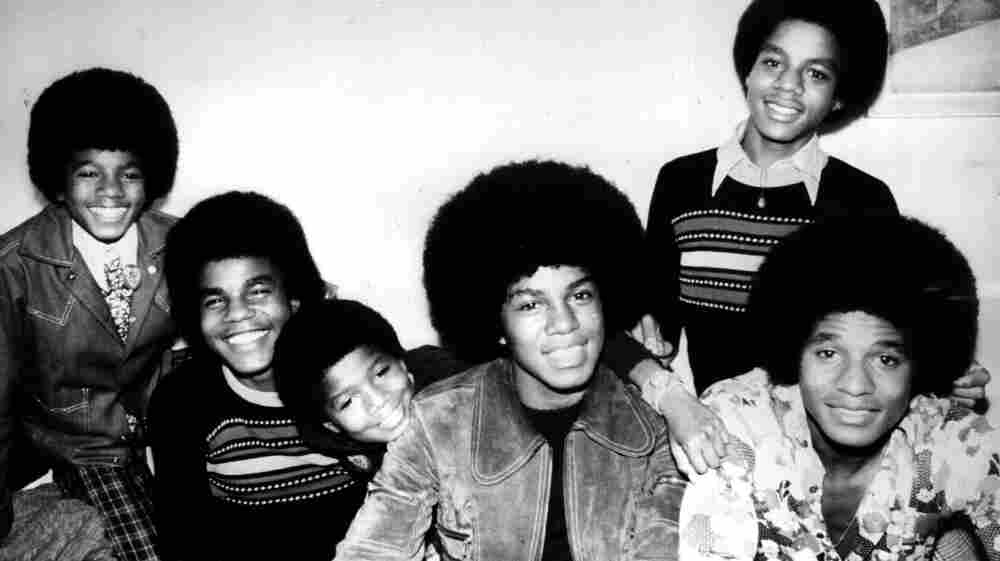 The six brothers who would all get their turn in The Jackson 5. Frank Barratt/Courtesy of Getty Images hide caption 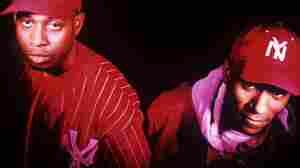 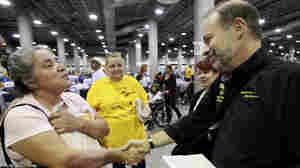 Sara Millan (left) thanks Neighborhood Assistance Corporation of America CEO Bruce Marks after NACA was able to reduce her family's mortgage during an event in Los Angeles in September 2010. Damian Dovarganes/AP hide caption

August 16, 2012 • Over the past four years, Bruce Marks has been on a traveling road show to help people avoid foreclosure. He says his nonprofit, the Neighborhood Assistance Corporation of America, has helped more than 200,000 people get their payments lowered so they can afford to keep their homes. 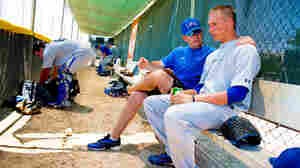 August 15, 2012 • For more than a century, countless Americans have dreamed of playing Major League Baseball. Few ever make it, but there is a place in Bradenton, Fla., that nurtures those dreams. IMG Academies takes students as young as 11 and mixes intense baseball training with an academic education. 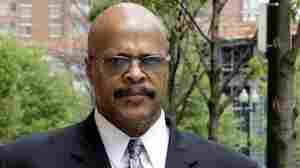 July 27, 2012 • Vernon Jackson thought his telecommunications invention would bring him wealth and success. But his dealings with a corrupt congressman eventually landed him in prison. He has since emerged from prison, reinvented as a man of faith. 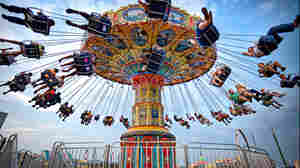 NPR listener Matt Anderson defines the American dream as "having the time, money, health and resources to get to enjoy such simple and whimsical pleasures with my family at our local state fair." Courtesy of Matt Anderson hide caption

July 19, 2012 • The concept of the American dream has been a part of our national consciousness for generations, but you'd be hard-pressed to find two people who define it precisely the same way. We asked for your take on the American dream; this is what you told us. 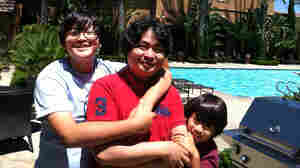 July 11, 2012 • A public school in Los Angeles has become a magnet for Korean families who want their kids to learn English while escaping the intense rigor of the Korean school system. In the U.S., they move from school district to school district, cherry-picking the best schools as their kids rise through the grades. 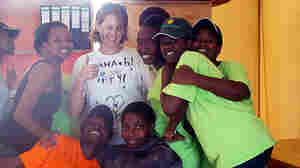 July 10, 2012 • For a growing number of U.S. college students and young adults, the idea of building an American dream is to think internationally. They are a group that pollster John Zogby is now calling "the first globals." 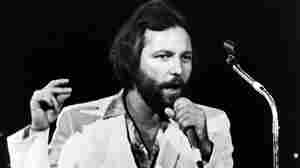 July 10, 2012 • For Robin D.G. Kelley, Blades' 1984 song "Buscando America" echoes his mother's experience of coming to this country, and exposes the painful struggle that is the cost of fulfilling the American dream.

July 4, 2012 • Deval Patrick says he's living the American dream. He's the first black governor of Massachusetts, one of only two ever elected as governor in American history. But he says many Americans feel the dream is under threat. Host Michel Martin speaks with Governor Patrick about his new book, Faith In The Dream. 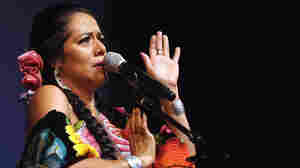 July 3, 2012 • In her interpretation of his songs we hear the way we all maneuver through more than one culture.

July 3, 2012 • NPR is looking at the American dream, and during an election year, politicians often talk about what they think that dream means. U.S. Senator Marco Rubio from Florida is one of the political world's brightest new stars. He offers his version of the dream in his new memoir, An American Son. He speaks with host Michel Martin. 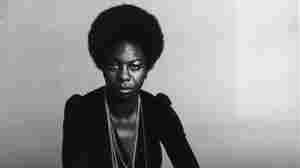 July 2, 2012 • Salamishah Tillet explains why Simone's pursuit of a life without fear still gives us all — musicians and fans alike — something to learn from. 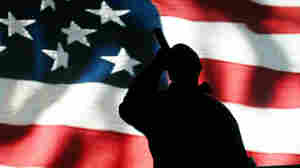 July 1, 2012 • This mix is made up of the songs you shared: from blues and gospel to classic rock and protest music, to punk and hip-hop. Your American Dream sounds hopeful, cynical, urgent and exuberant, often in the same song. 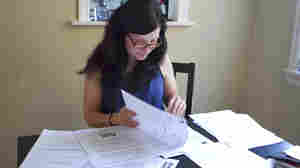 June 30, 2012 • At 30, Michelle Holshue is already making more than her parents do. But she graduated with $140,000 in student loan debt just as the recession hit. Like many young adults, Holshue is worried she'll never be able to own a home or raise a family. 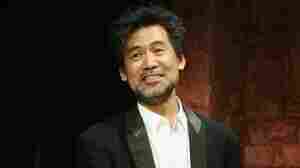 In plays like FOB, M. Butterfly and Chinglish, David Henry Hwang, seen here at a 2006 gala, touches on the obstacles that can stand between immigrants and the American dream. Amy Sussman/Getty Images hide caption

June 28, 2012 • Award-winning playwright David Henry Hwang has written extensively on Asian immigrants' assimilation into American culture. The American dream, he says, is defined by the ability to imagine a future, and then have hope of fulfilling it. 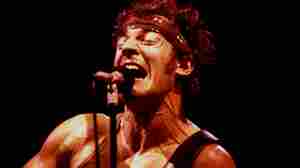 Bruce Springsteen onstage during the Born in the USA tour in 1985. Richard E. Aaron/Redferns hide caption

June 25, 2012 • Ann Powers says her infatuation with The Boss grew into adult respect for the strivers in his songs. 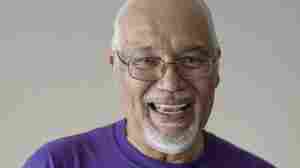 Comedian Charlie Hill says he's achieved the American dream, but that it's been out of reach for many fellow Native Americans. Courtesy of Charlie Hill hide caption

June 21, 2012 • Comedian Charlie Hill has been doing standup for more than three decades. Considered a hero in the Native American community, Hill says that he's achieved his dreams — but that the American dream is still out of reach for many Native Americans. 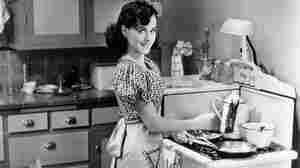 June 19, 2012 • American movies have been telling stories that idealize hard work, strong character and the rise of the little man for decades. But there's always a catch. NPR's Bob Mondello looks at what Hollywood means when it talks about the American dream. 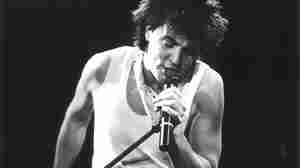 June 18, 2012 • Hua Hsu listened as his dad moved between America and Taiwan, making mixtapes at every stop. 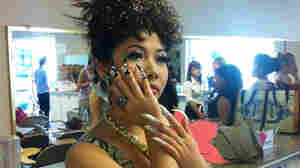 A model shows off an ABC student's work. Most of the students are studying manicuring. Courtesy of Advance Beauty College hide caption

June 14, 2012 • The idea of an "affordable manicure" was once an oxymoron. That's before Vietnamese immigrants arrived in the U.S. and cornered the market for inexpensive nail-care salons. The industry has offered a path to self-sufficiency for many Vietnamese-Americans in California and around the nation. 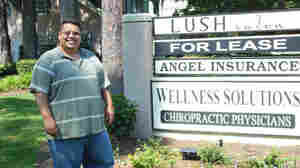 June 14, 2012 • The idea that anyone can make it in the U.S. is personified by immigrant success stories. But what if you came to America for a better life, worked hard and made it — but now face an increasingly anti-immigrant environment? One South Carolina family continues to have faith that the next generation will have it better. 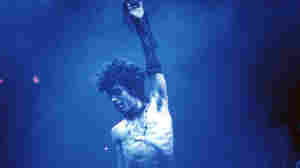 June 14, 2012 • Miles Marshall Lewis draws a line from Prince's concern for his community to the Hip-Hop Nation.

Listen · 2:49 2:49
More from American Dreams: Then And Now
Browse archive or search npr.org