Accessibility links
Poverty In America: The Struggle To Get Ahead Despite the slow economic recovery, tens of millions of Americans are still struggling in poverty. They face many challenges that have only been aggravated by the recession. NPR's Pam Fessler looks at the struggles of families living in the nation's poorest city Reading, Pa., and innovative approaches in the fight against poverty in Oakland, Calif. 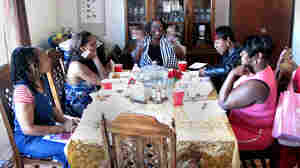 July 13, 2012 • An Oakland, Calif., nonprofit group encourages low-income families to figure out for themselves what they need to get ahead, and then helps them achieve their goals. Its pilot program for low-income families is proving to be a promising new approach to an old problem. 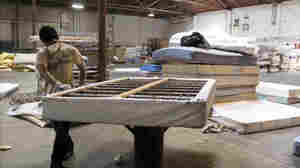 A worker dismantles a mattress at a recycling facility in Oakland, Calif. The material will be used to make carpet products and proceeds will help support the St. Vincent de Paul Society of Lane County, a nonprofit that helps low-income families in Eugene, Ore. Pam Fessler/NPR hide caption

July 12, 2012 • A nonprofit that helps low-income families in Eugene, Ore., recycles mattresses to help bring in money. Its funding model is inspiring other nonprofits to start salvaging junk to support services for the poor. 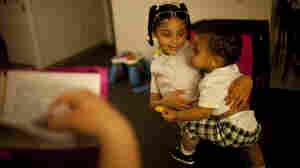 Shyanne (left) holds 1-year-old Makai, as Stepp checks to see if all of Shyanne's homework has been completed. Kainaz Amaria/NPR hide caption

July 11, 2012 • Poverty among single mothers is an astounding 66 percent in Reading, Pa., where Jennifer Stepp is raising three children by herself. To survive, she relies on a safety net of support.

July 11, 2012 • Robert Siegel speaks with Olivia Golden, fellow at the Urban Institute, about why there has been an increase of single mothers who are in poverty.

July 10, 2012 • Poverty in America is on the rise. Here's a breakdown of the more than 46 million poor Americans still struggling despite the slow economic recovery. 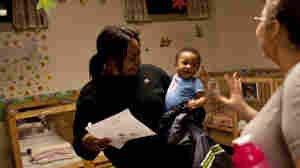 July 10, 2012 • Tens of millions of Americans are still struggling, despite the slow economic recovery. In Reading, Pa., the nation's poorest city, local nonprofit Opportunity House provides a lifeline for families trying to stay afloat by offering day care, housing and other assistance. But many in Reading are still left behind.

Listen · 12:29 12:29
More from Poverty In America: The Struggle To Get Ahead
Browse archive or search npr.org