Accessibility links
School Shootings In Newtown, Connecticut Authorities say 27 people are dead, including the gunman, after a shooting at Sandy Hook Elementary School in Newtown, Conn. Twenty of the victims were children, making this one of the deadliest school shootings in U.S. history. 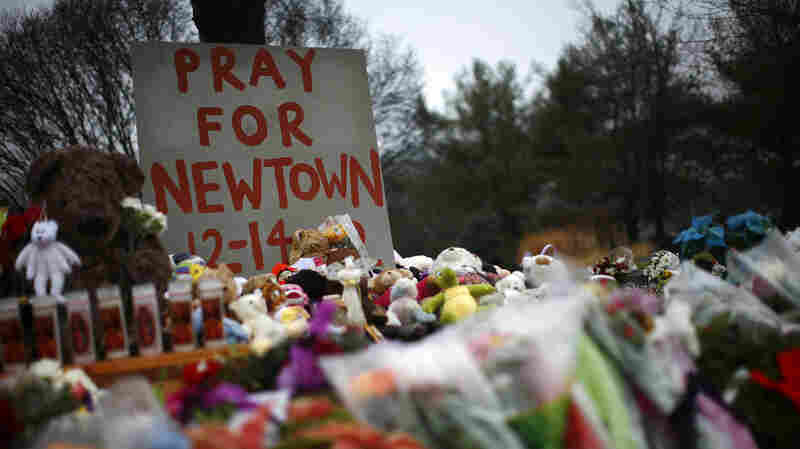 March 10, 2014 • In his first extensive comments about what his son did, Peter Lanza tells The New Yorker that "you can't get any more evil." Adam Lanza killed 20 children and six educators at a Connecticut school. 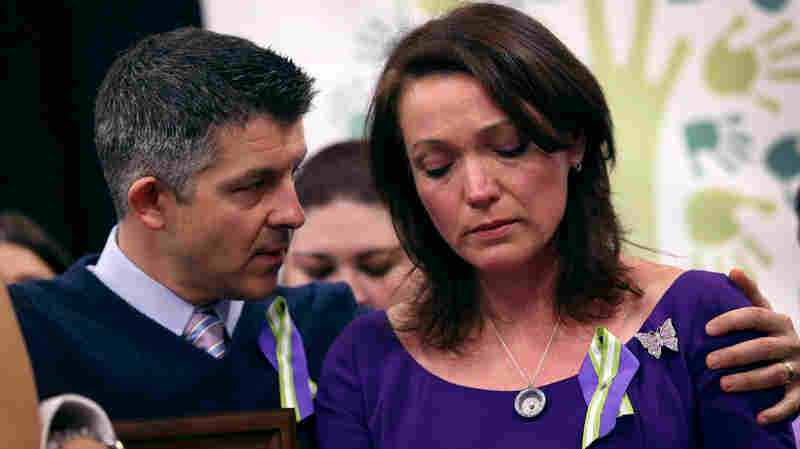 December 14, 2013 • After the shooting at Sandy Hook Elementary School, a group of victim families and others in the community joined together to try to prevent gun violence, and they asked the rest of the world to promise to help. A year after the tragedy, members of Sandy Hook Promise say their efforts to change society are just beginning.

December 14, 2013 • More than 60 percent of parents with children in kindergarten through grade 5 reported increased security precautions, according to a recent poll. It was the first national survey since the 1999 Columbine tragedy to ask parents how schools reacted to a mass shooting. 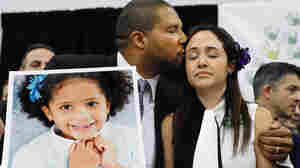 Jimmy Greene holds a picture of his daughter, Ana, as he kisses his wife Nelba Márquez-Greene, at a January news conference in Newtown, Conn. They try to remember the good days with their daughter. "It is what brings me great comfort and great joy," Márquez-Greene says. Jessica Hill/AP hide caption

December 14, 2013 • As a therapist, Nelba Márquez-Greene has spent a career counseling mentally ill and troubled young people. But she'll never understand what drove a young man to take the life of her 6-year-old daughter and 25 others. A year later, she is trying to prevent violence and promote healing. 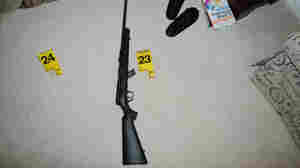 December 13, 2013 • A year after the massacre at Sandy Hook Elementary School in Newtown, Conn., gunman Adam Lanza's motives are still unclear. Connecticut Gov. Dannel Malloy says people may just have to be satisfied with what they've known from the beginning — that on Dec. 14, 2012, a horrible thing happened. 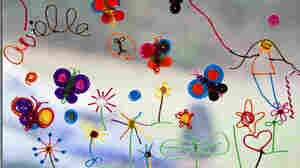 December 12, 2013 • When Jeremy Richman and Jennifer Hensel lost their daughter in the Connecticut shooting, they couldn't understand why someone would do such a thing. In seeking an answer, they're funding research into the forces that increase a person's risk of aggression — and have also found a path to healing.

In The Year After Newtown Shooting, Most States Relaxed Gun Laws

December 11, 2013 • In the wake of the school shooting in Newtown, Conn., last year, there was a call to enhance restrictions on gun purchases. One of the groups leading the charge was Mayors Against Illegal Guns. Melissa Block talks with Mark Glaze, executive director of Mayors Against Illegal Guns, about what he sees as his groups successes and failures over the past year.

In The Year After Newtown Shooting, Most States Relaxed Gun Laws 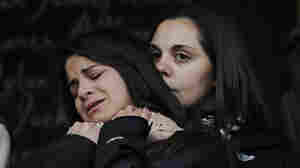 Newtown Calls For 'Acts Of Kindness' On Shooting Anniversary

December 9, 2013 • Relatives of those killed at Sandy Hook Elementary School say they will light candles in memory of the victims. 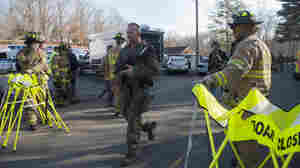 December 4, 2013 • The calls were made as gunman Adam Lanza entered the school on Dec. 14, killing 20 children and six staff members. "It's still going on," a school custodian told a dispatcher. "I keep hearing shooting. I keep hearing pops." 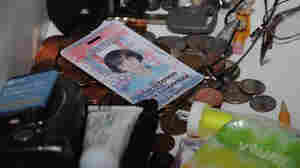 An image from a Connecticut State Police report on the shootings at Sandy Hook Elementary School shows a scene at 36 Yogananda St. in Newtown, Conn., where Adam Lanza killed his mother before driving to the school and killing 26 students and staff last December. AP hide caption

November 25, 2013 • At more than 50 pages, the summary report issued Monday gives an overview of findings from the investigation into the December 2012 shooting, while omitting controversial details such as 911 call recordings. 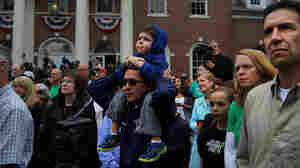 October 25, 2013 • In Newtown, Conn., demolition work has started at the Sandy Hook Elementary School. Bricks will be pulverized and steel melted down. Workers must sign agreements forbidding any public discussion of the site. Last year, a shooting there left six adults and 20 students dead. 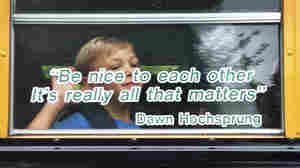 Voters in Newtown, Conn., have approved a plan to use nearly $50 million in state funds to demolish Sandy Hook Elementary and build a new school in its place. This photo provided by Craig Hoekenga shows his son Trey, a kindergarten student at Sandy Hook, on the school bus this year. The window has a quote from the late principal, Dawn Hochsprung, who was killed in last December's mass shooting. Craig Hoekenga/AP hide caption

October 6, 2013 • In a referendum marked by a large turnout and an emphatic result, the people of Newtown, Conn., have voted to demolish Sandy Hook Elementary and build a new school. Sandy Hook was the scene of a mass shooting last December, when 20 children and six staff members were killed.

June 18, 2013 • After the shooting at Sandy Hook Elementary School, states have taken steps to limit gun access for people with mental illness. In Connecticut, a new law requires psychiatric hospitals to report anyone who is voluntarily admitted, so the state can revoke any gun licenses they may hold. Some in the mental health community say it could prevent people from seeking psychiatric help.

June 14, 2013 • The Newtown, Conn., school shooting last December prompted the local weekly paper to publish its first special edition ever. But the Newtown Bee's staff has made a conscious decision not to commemorate the six-month anniversary of the shooting. The decision is part of their struggle to cover a continuing tragedy while trying to move forward as journalists, and as members of the community. 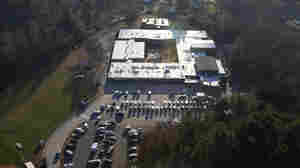 May 11, 2013 • After multiple meetings about whether to renovate, rebuild or relocate, town leaders voted to tear down the elementary school in which 26 children and educators were killed in a mass shooting in December.

May 2, 2013 • In December, six-year-old Benjamin Wheeler was among those killed in the attack on Sandy Hook Elementary School. Since then, his father, David Wheeler has met with officials in Washington, D.C., urging tighter controls to rein in gun violence. He speaks with Melissa Block about his views on the legislative process and what his path forward is from here. 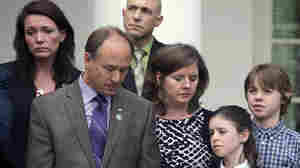 Family members of those killed in the Newtown, Conn., school shooting stand together as President Obama speaks at the White House on Wednesday, after gun control measures were defeated in the Senate. In the foreground are Mark and Jackie Barden with their children Natalie and James, who lost Daniel. Behind them are Nicole Hockley, mother of Dylan, and Jeremy Richman, father of Avielle. Carolyn Kaster/AP hide caption

Newtown Residents: Senate Gun Votes 'A Slap In The Face'

April 18, 2013 • Following the Senate's rejection Wednesday of a range of gun control measures, including universal background checks, many in Newtown, Conn., are reacting with surprise and disappointment. Neil Heslin, whose son Jesse was one of those killed, says Wednesday was "a shameful day for Washington."

April 18, 2013 • Four months after tragedy struck in the Sandy Hook neighborhood of Newtown, a once-thriving business district in the center of town is struggling. Visitors aren't comfortable shopping and eating just a mile from what used to be Sandy Hook Elementary School. But shop and restaurant owners are doing their best to move forward and bring back customers. 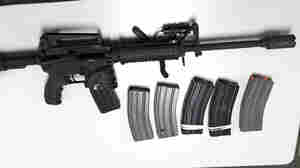 A Bushmaster rifle, similar to the type used by Adam Lanza during the shooting at Sandy Hook Elementary School, and some ammunition magazines. The sale and possession of this type of weapon, and high-capacity magazines, will be severely restricted in Connecticut under new legislation. Michelle McLoughlin /Reuters /Landov hide caption

April 4, 2013 • Lawmakers in the state where a gunman killed 20 children and six educators at an elementary school last December have responded with legislation that bans assault-style weapons and high-capacity magazines and requires background checks for purchasers. 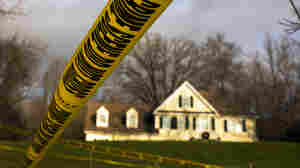 Dec. 18, 2012: Crime scene tape stretches across the property outside the home where Adam Lanza lived with his mother, Nancy Lanza. Inside, police found weapons and other evidence. Lucas Jackson /Reuters /Landov hide caption 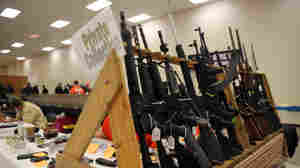 March 7, 2013 • The Senate Judiciary Committee takes up four proposals. They include a new ban on assault-style weapons. While the bills are likely to get the committee's OK, they face opposition after that. 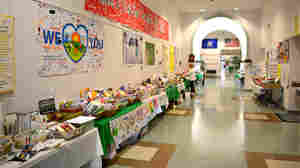 Some of the many cards, letters and artwork sent to Newtown from all over the world was on display at the Newtown Municipal Center on Jan. 30. The items were recently moved to temporary storage. Courtesy of Ross MacDonald hide caption

What Will Happen To All The Letters People Sent to Newtown?

February 25, 2013 • In the weeks following the killings at Sandy Hook Elementary School, more than a quarter-million cards, letters and gifts have arrived in Newtown, Conn. The town is trying to decide what to do with a collection that quickly outgrew its storage at the municipal building and now fills a warehouse.

What Will Happen To All The Letters People Sent to Newtown? 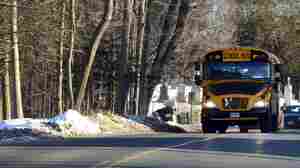 With Those Lost In Mind, Sandy Hook Students And Staff Return To Classes

January 3, 2013 • For the first time since the Dec. 14 mass shooting, the children and educators are gathering. A nearby school building that was empty has been transformed into a new Sandy Hook Elementary. Twenty children and six adults were killed by a gunman who then took his own life. 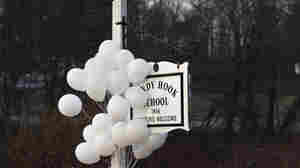 After the attack: Balloons hung from the Sandy Hook Elementary School sign on Dec. 15. On Dec. 14, six adults and 20 children were killed there before the gunman took his own life. Shannon Stapleton/Reuters /Landov hide caption

Woman Who Allegedly Posed As Newtown Victim's Aunt Is Arrested

December 27, 2012 • Authorities say Nouel Alba of the Bronx pretended to be a relative of a 6-year-old victim and collected donations for a "funeral fund." When confronted about it, they allege, she lied to FBI agents. So far, she's only been charged with lying to authorities. Other charges could follow. 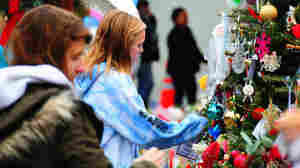 Mourners put decorations on a Christmas tree, part of a memorial in Newtown, Conn. Holiday greetings, toys and cards have flowed into the town, and some residents say the community feels closer-knit since the shooting. Zhang Chuanshi /Xinhua/Landov hide caption

Pulling Together, Newtown Celebrates Holiday 'As Best We Can'

December 24, 2012 • Shopkeepers say Saturday was the first day people resumed Christmas shopping in Newtown, Conn., since the school shootings. Some locals say the community feels closer since the tragedy, and the post office is being inundated with thousands of holiday greetings, gifts and messages of support from around the world.

Pulling Together, Newtown Celebrates Holiday 'As Best We Can'