Accessibility links
Faith Matters Each week on Tell Me More, the program explores how matters of faith and spirituality shape the lives of everyday people.

September 23, 2011 • While mourning the death of a loved one, many may find themselves at a loss when trying to incorporate their family's beliefs and traditions. That's when the Shiva Sisters step in. Their event planning business specializes in shiva, the period of mourning observed by Jews after a death. Michel Martin speaks with Allison Moldo and Danna Black about their work.

September 2, 2011 • In Miss., church attendees share meals that include lots of mac and cheese, pork chops and fried food. But Miss. has the highest obesity rate in the U.S. Local Rev. Michael Minor is spreading the gospel of healthy eating, and The National Baptist Convention has asked him to create health and wellness plans to influence other churches. He speaks with host Michel Martin.

August 19, 2011 • Talk of polygamy has spread nationwide, partly due to TV shows and news coverage of polygamist leader Warren Jeffs' sexual assault conviction. But some see polygamy as a lifestyle rooted in faith. Two open polygamists discuss why they've chosen such lifestyles, what burdens they bear, and how they feel about pop culture's depictions of polygamy.

Signs Of Faith In Political Headlines

Signs Of Faith In Political Headlines 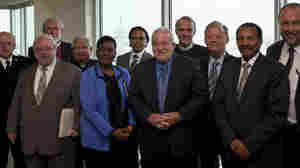 Members of the Circle of Protection gather before meeting with President Obama, Wednesday July 20, 2011. Courtesy of Bread for the World hide caption

toggle caption
Courtesy of Bread for the World

Obama, What Would Jesus Cut?

July 22, 2011 • On Wednesday, a bipartisan group of faith leaders called the Circle of Protection met with President Obama. They urged him to defend programs serving the poor and hungry. Host Michel Martin speaks with Rev. David Beckmann about his meeting with Obama and why he feels protecting such programs should be a moral imperative.

Obama, What Would Jesus Cut? 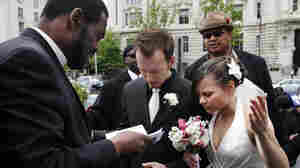 Bishop Harry R. Jackson Jr., left, prays with Jonathan Paul Ganucheau and Denise Buckbinder Ganucheau before performing a religious wedding ceremony that was part of a protest against the District of Columbia city council's approval of legislation recognizing same sex marriages performed in other states, in Washington, on Tuesday, May 5, 2009. Jacquelyn Martin/AP hide caption

June 10, 2011 • Rev. Suzan Johnson-Cook was recently sworn in as the Obama administration's Ambassador-at-Large for International Religious Freedom. Rev. She has been a leading voice of faith in NYC, ministering to the city's police officers to Wall Street financial wizards. Johnson-Cook's new post will take her around the world to monitor the state of religious freedom on an international scale. Host Michel Martin speaks with Johnson-Cook about her duties.

Get Ready For The Rapture

May 20, 2011 • In 1994, Christian talk radio host Harold Camping first predicted that the beginning of the end comes on Saturday, May 21st, 2011. Host Michel Martin talks about apocalypse predictions and movements they inspire with Rabbi Brad Hirschfield, president of the National Center for Jewish Learning and Leadership, and Harvard Divinity School professor Harvey Cox.

Get Ready For The Rapture

May 13, 2011 • The Presbyterian Church (USA) has voted to remove a celibacy requirement that kept many gay, lesbian, bisexual and transgender people from becoming ministers. Advocates call the passing of this vote a major milestone. Others fear it could spark a crisis within one of America's oldest mainline Protestant denominations. Host Michel Martin speaks with Rev. Janet Edwards of More Light Presbyterians, a group advocating on behalf of gays serving in the ministry.

April 29, 2011 • Tornadoes and storms ripped through the South this week, killing hundreds of residents. In this "Faith Matters" segment, host Michel Martin speaks with Rev. Schmitt Moore, the pastor at Bethel Baptist Church in Tuscaloosa, Ala., about the devastation his parish is facing and how faith is involved in the recovery effort.

Easter Celebrations Through the Centuries

April 22, 2011 • Did you know that during the second century, a pope from North Africa persuaded the Catholic bishops to move Easter celebrations to Sunday? Or did you know that the Easter festival used to last from sunset until dawn? For this week's "Faith Matters" conversation, host Michel Martin discusses how Easter rituals have changed over the centuries with Mary Elizabeth Sperry of the U.S. Conference of Catholic Bishops.

Easter Celebrations Through the Centuries

What To Do With Leftover Matzo?

April 15, 2011 • As Jewish families all over the world take part in the ritual Passover feast known as the Seder, one element is a MUST: the traditional unleavened bread, matzo. As with any staple in a feast, there can be lots of leftovers. One of the leading authorities on Jewish cuisine, Joan Nathan, offers host Michel Martin expert advice on creative ways to use leftover matzo.

What To Do With Leftover Matzo?

April 15, 2011 • Monday marks the start of one of the most widely celebrated holidays on the Jewish calendar: Passover. The religious tradition commemorates Exodus, the story where Moses freed the ancient Israelites from slavery in Egypt. Host Michel Martin speaks with Rabbi Shmuel Herzfeld of Ohev Sholom, the National Synagogue in Washington, DC, about Passover's significance and how it's celebrated today.

Is U.S Involvement In Libya 'A Just War'?

April 1, 2011 • Earlier this week, President Obama explained his decision for U-S intervention in Libya. He said the main goal was to protect Libyan civilians. The move has been criticized by U.S lawmakers, most of whom question the military operation's cost and strategy. In his criticism, Democratic Congressman Emanuel Cleaver argues that the campaign does not conform to the seven Christian principles of a Just War. To understand what those principles are, and the definition of a "just war", host Michel Martin speaks with Shaun Casey, a professor of Christian Ethics at Wesley Theological Seminary in Washington, D.C.

Is U.S Involvement In Libya 'A Just War'?