Accessibility links
The Legacy And Future Of Mass Incarceration Between 1970 and 2010 more people were incarcerated in the U.S. than were imprisoned in any other country, and at no other point in its past had the nation's economic, social and political institutions become so bound up with the practice of punishment. This year, NPR will report on the Rockefeller Drug Laws and their consequences. 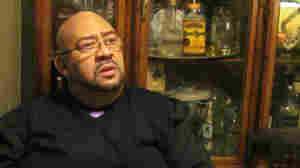 Now 59, George Prendes works as a telemarketer in New York and struggles to make the rent on his small Bronx apartment. Natasha Haverty hide caption

February 14, 2013 • George Prendes was 23 when he was sentenced under New York's Rockefeller drug laws — tough mandatory sentencing guidelines for nonviolent drug crimes. The 15 years Prendes served for a drug transaction still reverberate for him and his family.

February 14, 2013 • Forty years ago, New York enacted tough laws in response to a wave of drug-related crime. They became known as the Rockefeller drug laws, and they set the standard for states looking to get tough on crime. But a new debate is under way over the effectiveness of such strict sentencing laws.

Listen · 7:47 7:47
More from The Legacy And Future Of Mass Incarceration
Browse archive or search npr.org