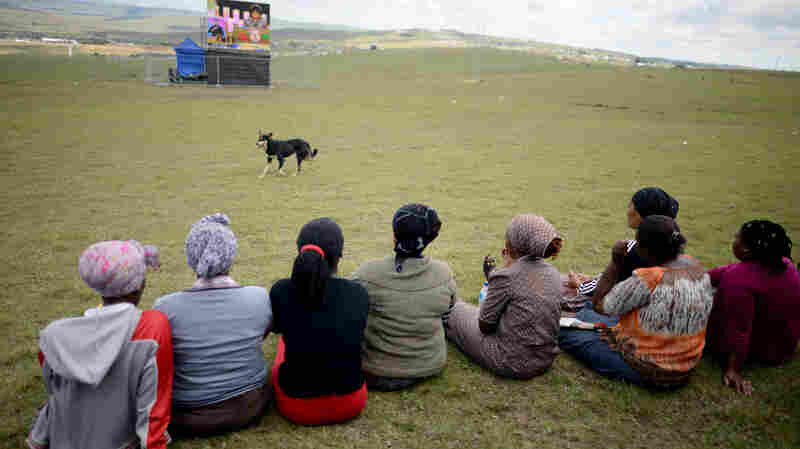 Large video screens were set up around the village of Qunu for the more than 4,000 mourners who gathered for the service. Jeff J Mitchell/Getty Images hide caption

As The World Watches, Mandela Is Buried In His Humble Village

December 15, 2013 • Under a sunny African sky, Nelson Mandela was buried Sunday on a hill overlooking his beloved boyhood village. Members of his clan, national leaders and a global audience bid farewell to the man who transformed his country and became one of the world's most revered figures.

The Scene From The Funeral In Qunu 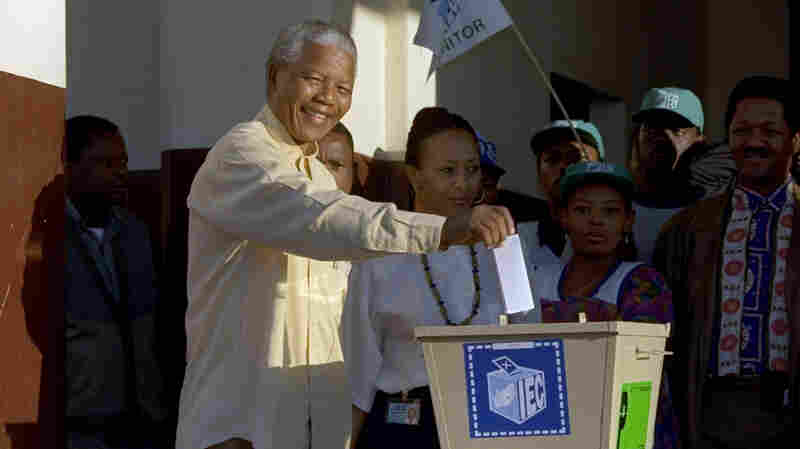 December 14, 2013 • Mandela showed the way as African states began to democratize in the 1990s. Today, African countries are holding elections with greater regularity than ever before, but it's still relatively rare for power to change hands at the ballot box. 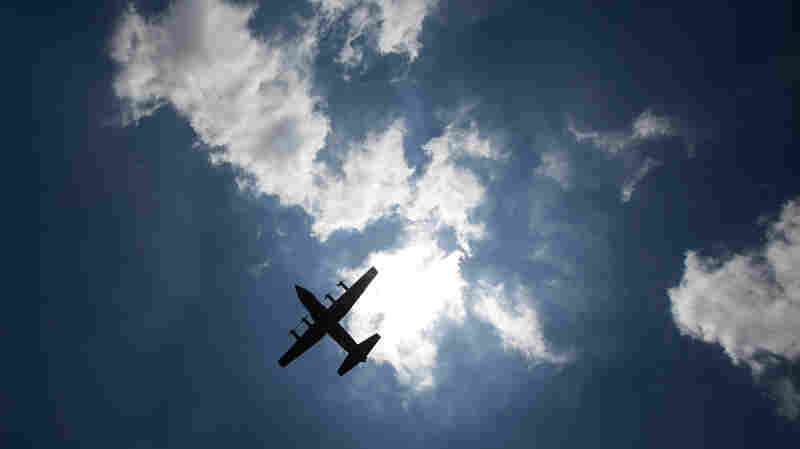 December 14, 2013 • On the final leg of 10 days of mourning, Nelson Mandela's body was flown from the seat of government in Pretoria to his ancestral hometown of Quno. 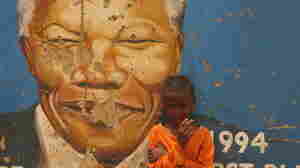 A South African boy stands in front of a mural of Nelson Mandela in Soweto, South Africa, earlier this month. Veronique Tadjo for NPR hide caption

December 13, 2013 • Equality for all South Africans, regardless of race or color, was at the core of the struggle against apartheid. Nineteen years after Nelson Mandela was sworn in as the first black president in the country's first democratic elections, what is the status of race relations? 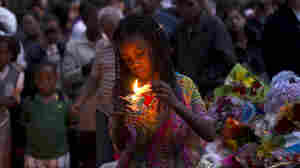 On Dec. 8, three days after Nelson Mandela's death, a girl in Johannesburg lights a candle in his memory. Poet Mbali Vilakazi has written an elegy for Mandela that asks the next generation of South Africans to continue his legacy. Pedro Ugarte/AFP/Getty Images hide caption

An Elegy For Mandela Looks Back In Mourning, Forward In Hope

December 13, 2013 • Mbali Vilakazi, the winner of our Poetry Games last year, honors Mandela's memory with a poem, "The Black Pimpernel." The title is a derogatory nickname given to Mandela in his revolutionary days. Vilakazi's poem looks toward the future: "And if we have stood on the shoulders of giants, / We are giants still / And giants, we will come again."

An Elegy For Mandela Looks Back In Mourning, Forward In Hope 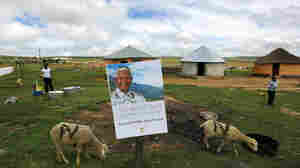 A mother and her son stand in their garden behind a fence at the perimeter of Nelson Mandela's property in Qunu, South Africa, as funeral preparations continue Friday. Mandela will be buried Sunday in the small, rural village that was his boyhood home. Yannis Behrakis/Reuters/Landov hide caption

For Burial, Mandela Will Return To His Beloved Boyhood Village

December 13, 2013 • Some African leaders transformed their home villages into monuments glorifying themselves. Nelson Mandela rejected such extravagance and will be buried Sunday in a tiny farming village that's barely changed since he ran across its green rolling hills nearly a century ago.

For Burial, Mandela Will Return To His Beloved Boyhood Village 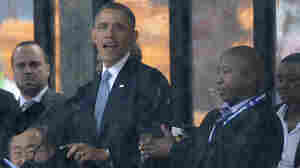 As President Obama and other world leaders spoke Tuesday in Johannesburg at a memorial for Nelson Mandela, a man stood nearby and appeared to be doing sign language interpretation. Many in the deaf community are outraged because the man appeared to be faking. Pedro Ugarte /AFP/Getty Images hide caption

December 11, 2013 • As a man stood next to President Obama and other world leaders at Tuesday's memorial service for Nelson Mandela he only pretended to do sign language, many in the deaf community say. 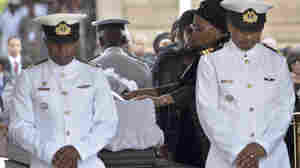 December 11, 2013 • South Africans are paying their respects at a hilltop amphitheater in Pretoria, the spot where Mandela was sworn in as the country's first black president nearly 20 years ago. Hundreds of thousands of people, perhaps millions, are expected to come over the next three days. 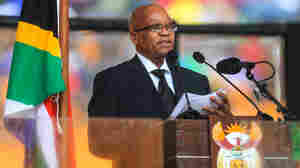 South African President Jacob Zuma addresses the memorial service for Nelson Mandela in Johannesburg, South Africa, on Tuesday. The audience at the service began booing Zuma from the moment he stepped into the stadium. Meng Chenguang/Xinhua/Landov hide caption

December 11, 2013 • The current South African leader was expecting to bask in the reflected glory of Nelson Mandela. But when Zuma appeared at the beloved Mandela's memorial service, he was booed at every turn. It represented the democracy Mandela championed — and the public's deep discontent with scandal-ridden Zuma.

December 11, 2013 • Renee Montagne talks with Ofeibea Quist-Arcton about South Africa's 10-day goodbye to Nelson Mandela. His body will lie in state at the Union Buildings in Pretoria, the scene of his presidential inauguration in 1994.

December 10, 2013 • Renee Montagne brings us an update on the memorial service for the late president of South Africa, Nelson Mandela. 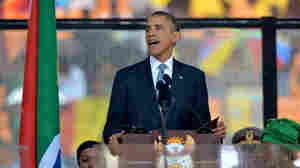 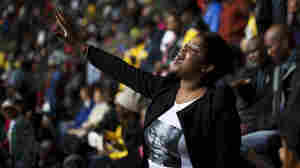 A woman sings in the stands at the memorial service for former South African President Nelson Mandela on Tuesday. Muhammed Muheisen/AP hide caption

December 10, 2013 • Heads of state joined tens of thousands of South Africans at a memorial service in Johannesburg to mourn and celebrate Nelson Mandela's life. The nation's first black president and icon of equality died on Thursday at age 95. 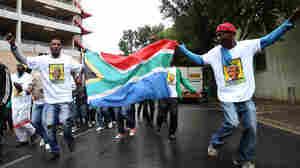 December 10, 2013 • South Africans paused Tuesday to bid farewell to the country's first black president, but there was nothing somber about it. They sang and shouted and ululated, with some making themselves hoarse even before a memorial service at the country's biggest stadium. 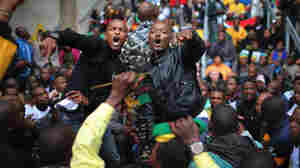 Members of the public sing and dance as they arrive for the Nelson Mandela memorial service at the FNB Stadium, on Tuesday in Johannesburg, South Africa. Christopher Furlong/Getty Images hide caption

December 10, 2013 • With a mix of joyful, mournful and soulful music tens of thousands of South Africans and dozens of world leaders gathered in a huge soccer stadium to celebrate the country's emancipator. Nelson Mandela was remembered as an "incomparable force of leadership."

'We Are Here ... To Tell Madiba That His Long Walk Is Over'

December 10, 2013 • Tens of thousands crowded into South Africa's national soccer stadium in Johannesburg in the pouring rain to pay tribute to Nelson Mandela, who helped transform the nation. The deputy president of the African National Congress party, Cyril Ramaphosa, made the opening remarks, referring to Mandela by his clan name.

'We Are Here ... To Tell Madiba That His Long Walk Is Over'

Rain Is Pouring On Capacity Crowd At Mandela Memorial

December 10, 2013 • On the day Nelson Mandela emerged from 27 years in prison, it was raining in Johannesburg — a good omen in South Africa. It was pouring again Tuesday on a stadium overflowing with those celebrating and saying farewell to Mandela. Steve Inskeep has the latest on Tuesday's public memorial service.

Rain Is Pouring On Capacity Crowd At Mandela Memorial

December 10, 2013 • People danced and swayed to music under a sea of colorful rain umbrellas as crowds gathered at a huge soccer stadium in Johannesburg on Tuesday to celebrate the life of Nelson Mandela.

December 9, 2013 • The world has joined South Africans in mourning and memorializing Nelson Mandela, who died Thursday at age 95. The life of the man known as the '"father of the nation" — the anti-apartheid hero, Nobel Laureate laureate and South Africa's first black president — will be celebrated on Tuesday in Johannesburg, a ceremony that will be attended by many world leaders. 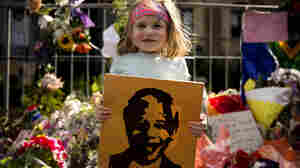 December 9, 2013 • Sam Reinders is a photojournalist born and raised in Cape Town, South Africa. She was 13 when Nelson Mandela was freed from prison. In the days after his death, Reinders walked the streets of her hometown and sent us this essay.