Accessibility links
Ecstatic Voices America is one of the most religiously diverse countries on earth. We want to discover and celebrate the many ways in which people make spiritual music — individually and collectively, inside and outside houses of worship. 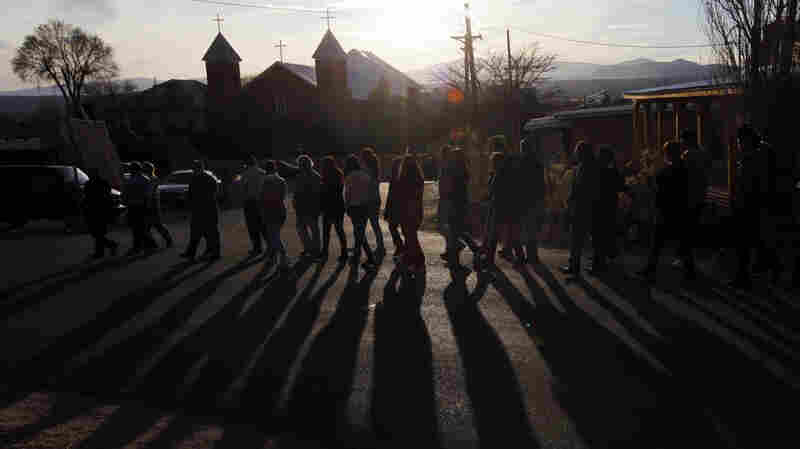 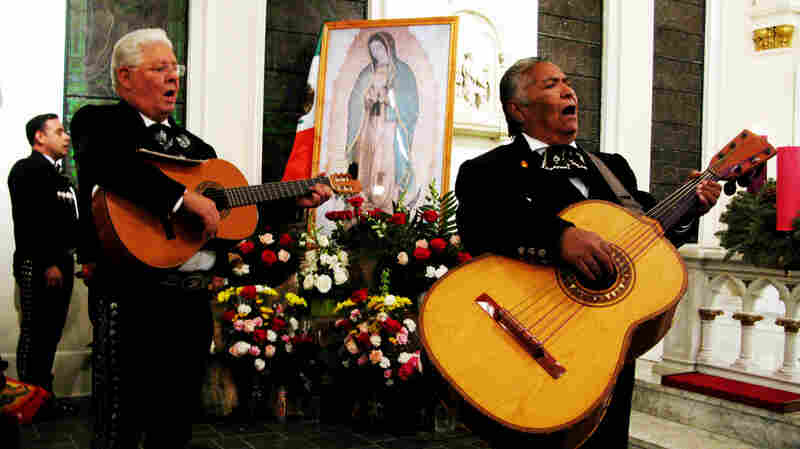 January 3, 2014 • The mariachi Mass brings an ensemble of garishly dressed folk musicians — with their guitars, trumpets and violins — right down to the front of the church, where they play liturgical music. 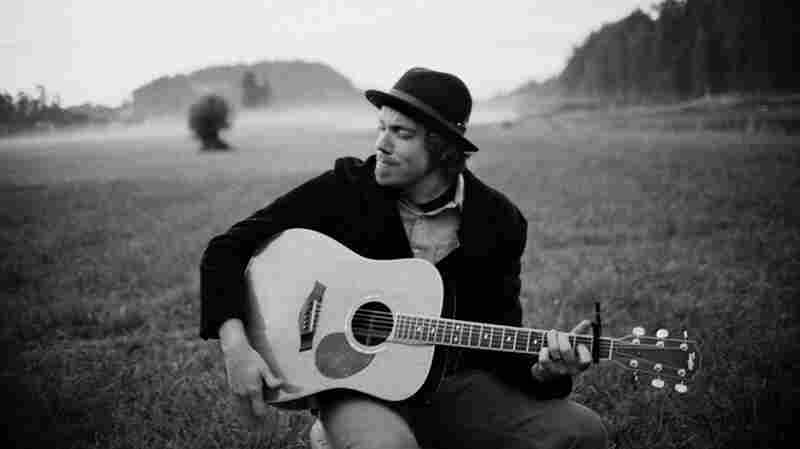 In his music, Josh Garrels says, he tries to "peel back layers" of what it means to be a Christian. Sasha Arutyunova/Courtesy of the artist hide caption

December 26, 2013 • Josh Garrels says his music tries to "peel back layers" of what it means to be a Christian. He says he's given away 153,000 digital copies of his breakout album, Love & War & The Sea in Between. 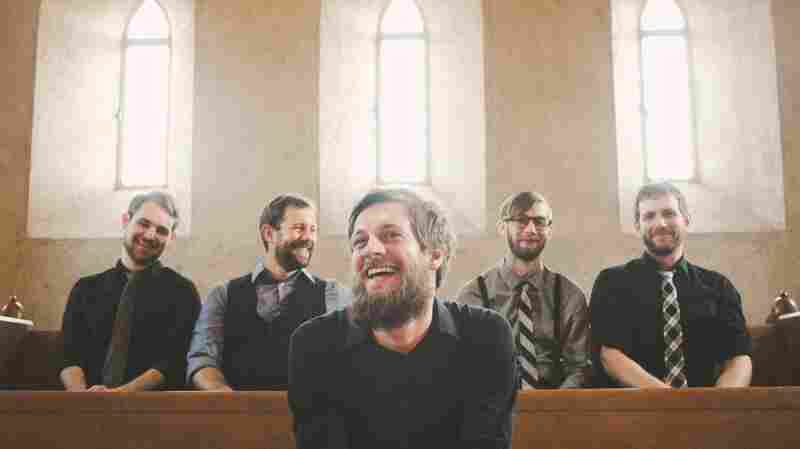 Taylor Muse (front), lead singer of the Austin indie-rock band Quiet Company, says the group is ready to be seen as more than just "the atheist band." Courtesy of the artist hide caption

December 5, 2013 • Can non-belief in God become a belief system itself? NPR's John Burnett has the story of the Texas indie band Quiet Company, who made a splash with a surprisingly positive album about frontman Taylor Muse's crisis of faith. 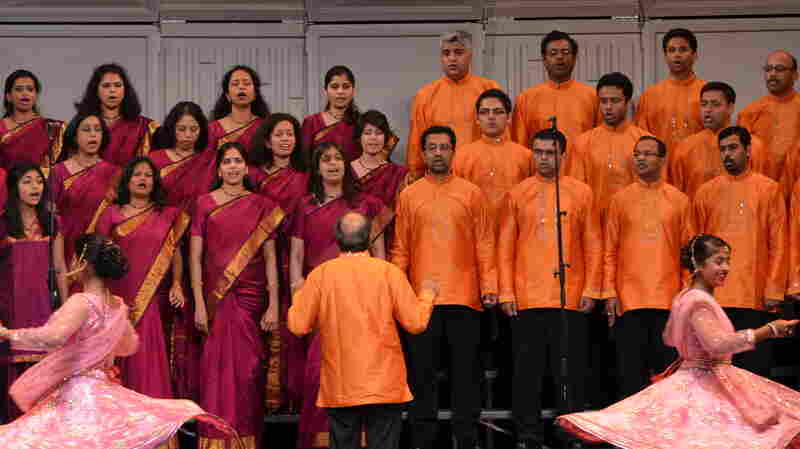 November 7, 2013 • Kanniks Kannikeswaran writes groundbreaking Hindu sacred music and forms community choirs to perform it. "When a group of about 20 strangers get together and sing raga-based music with choral harmony for the first time," he says, "something magical begins to happen." 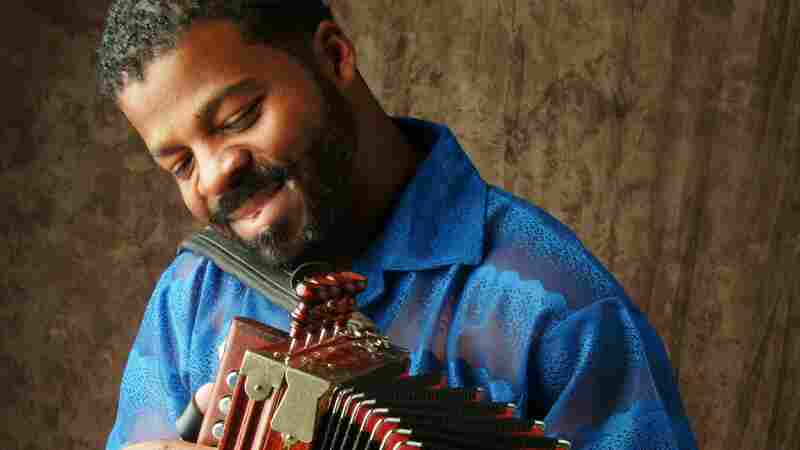 After years of attending church dances, Step Rideau says he was moved to connect with his heritage on a deeper level. Courtesy of the artist hide caption

October 27, 2013 • If it's Sunday in Houston, get ready to dance up and down the aisle at church. Zydeco music is the soundtrack to spirit-filled parties fueled by beer, boudin, and red beans and rice. It's a joyful continuation of a decades-old tradition. 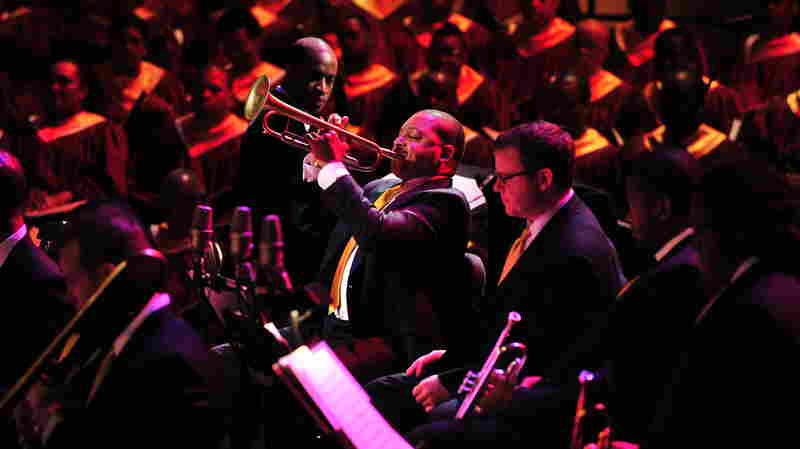 October 19, 2013 • The trumpeter and bandleader premiered his gospel-jazz Abyssinian Mass back in 2008. But now, accompanied by a 70-voice choir, he's taking the sprawling work on the road and into African-American churches — whose services were the inspiration for the piece. 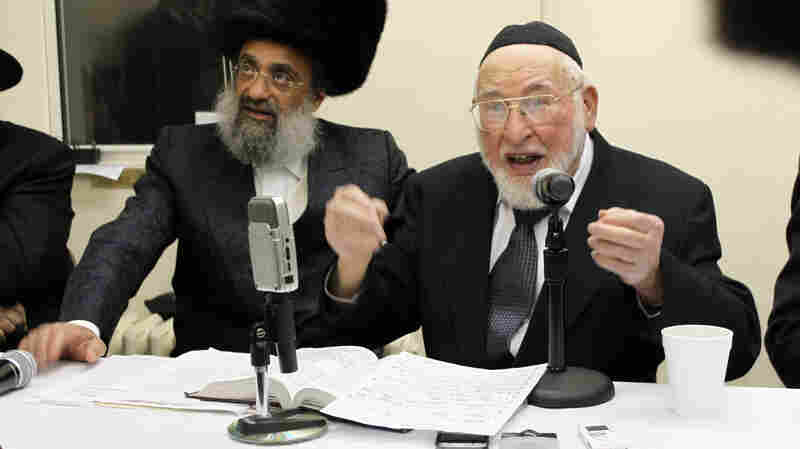 Ben Zion Shenker (right) is a world-renowned composer in the Modzitzer tradition of Chasidic Judiaism. Joel Lowy/Courtesy of the artist hide caption

October 16, 2013 • The Modzitzer sect of Chasidic Judaism, which originated in the Polish town of Modzitz, is known for its beautiful melodies. Among the most emblematic and prolific composers in this tradition is Brooklynite Ben Zion Shenker — who, at 88, continues to create new works. 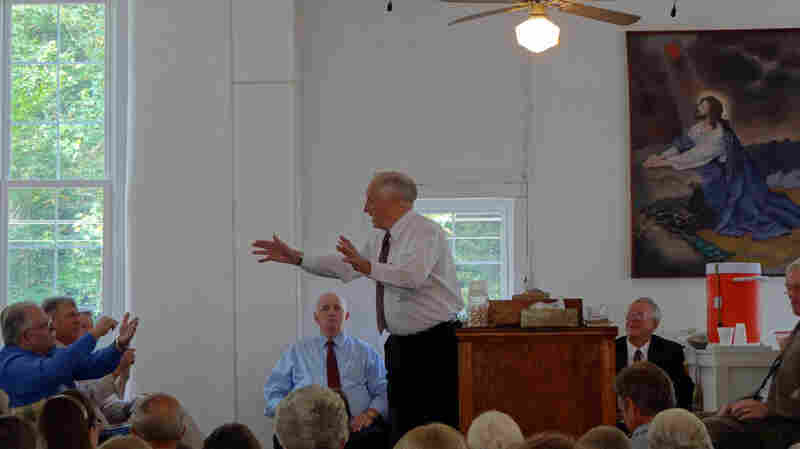 Church elder Elwood Cornett preaches at a recent reunion of Old Regular Baptists. Brother Don Pratt is seated behind him in a blue shirt and tie. Cindy Johnston/NPR hide caption

October 15, 2013 • Hidden deep in the hills of Appalachia, there's a tradition of worship music that has not changed since the 18th century. The hymnody is still practiced by congregations of the Old Regular Baptist Church, where a leader calls out a line and the people respond in a mournful, soaring chorus. 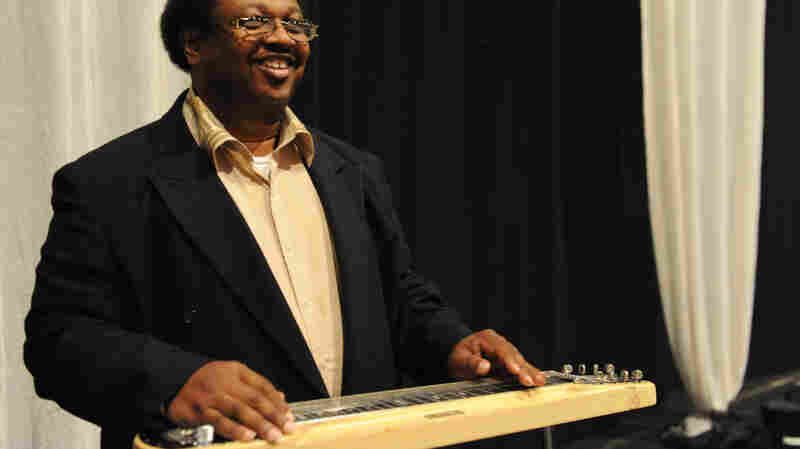 The Sacred Steel tradition is an integral part of worship. From the House of God Keith Dominion Church, Aubrey Ghent (pictured) helped revive the style in 1990s. Brad Gregory/Courtesy of the artist hide caption

September 18, 2013 • For the Church of the Living God in Toccopola, Miss., the lap steel guitar channels the voice of God through hymns and improvised solos that mix gospel, blues and country. 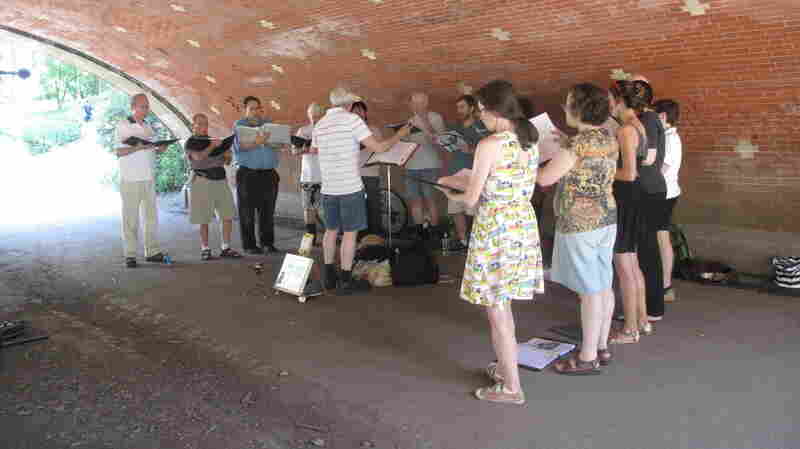 The Renaissance Street Singers give a performance at the Winterdale Arch, near the West 81st Street gate in Central Park. Joel Rose/NPR hide caption

August 25, 2013 • For 40 years, the Renaissance Street Singers have given free public performances of sacred music. But they insist that their mission is not religious in nature. 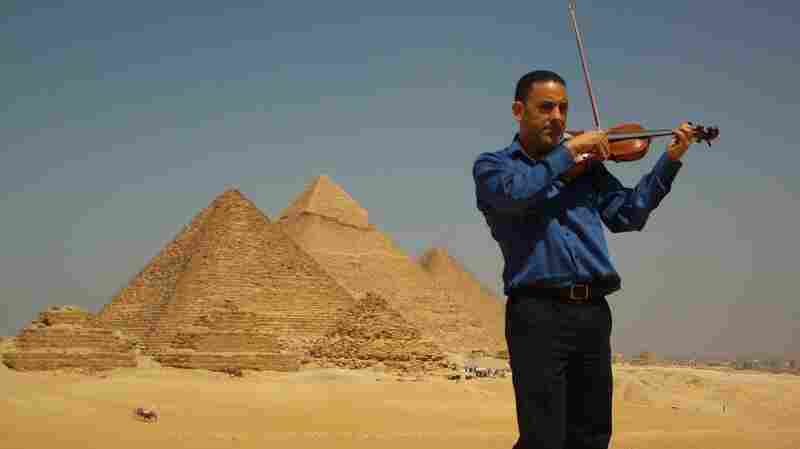 Sufi Mystics Get A Modern Soundtrack

August 17, 2013 • The ancient spiritual practice of Sufism incorporates all kinds of activities, including music, to achieve a state in which the practitioner loses the ego. Riad Abdel-Gawad creates new Sufi music by translating sacred chants to the violin. 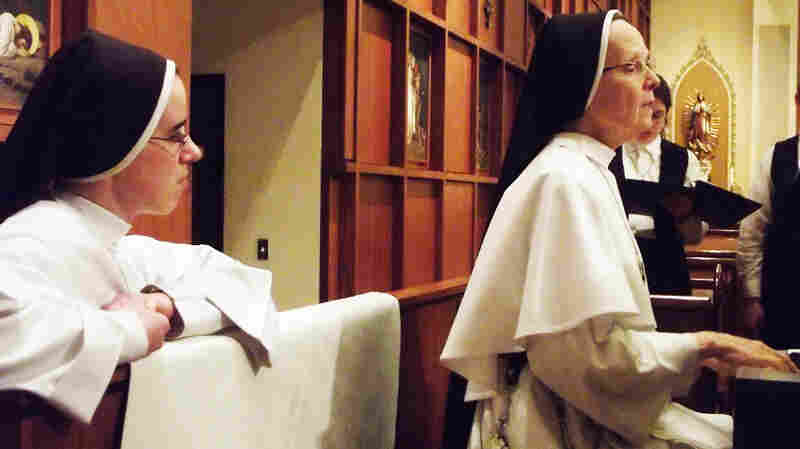 Life As Prayer: The Singing Nuns Of Ann Arbor

August 13, 2013 • In the cloistered world of classical music recordings, there is great interest in choral music by Catholic nuns these days. On Mater Eucharistiae, the Dominican Sisters of Mary, Mother of the Eucharist, are "able to bring other people into that space of prayer when we're singing." 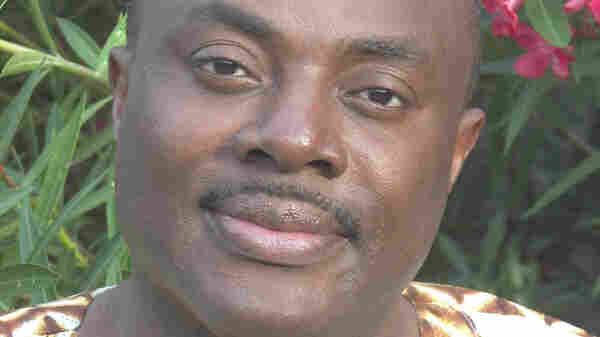 August 3, 2013 • Part of understanding African sacred music means thinking about its colonial context. It's the music of oppressed people combined with the music of their oppressors. For decades, Fred Onovwerosuoke has collected and arranged this music for choral groups. 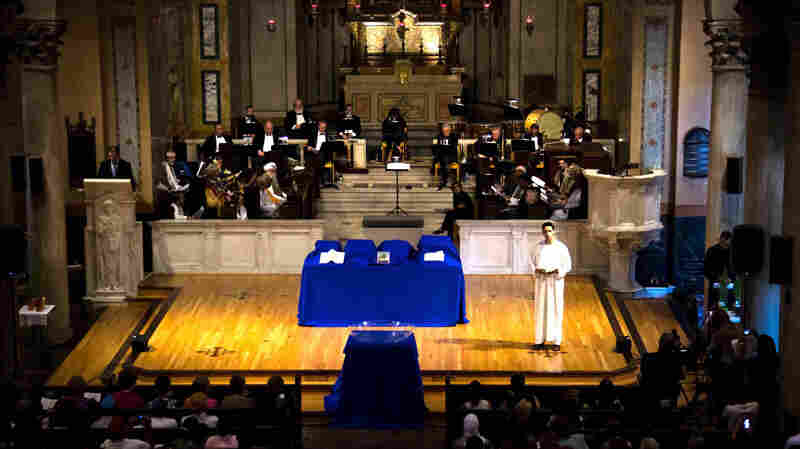 Ben Youcef leads the call to prayer for an interfaith service at The Guibord Center in Los Angeles. Courtesy of the artist hide caption

In Hollywood, The Actor Who Gives The Call To Prayer

July 24, 2013 • The adhan is not music, per se — music is not allowed in the mosque — but the five-times-daily call to prayer can be musical, and quite beautiful. For Ben Youcef, it's a matter of harmonizing his life as a devout Muslim, a muezzin and an actor who sometimes plays Islamic extremists. 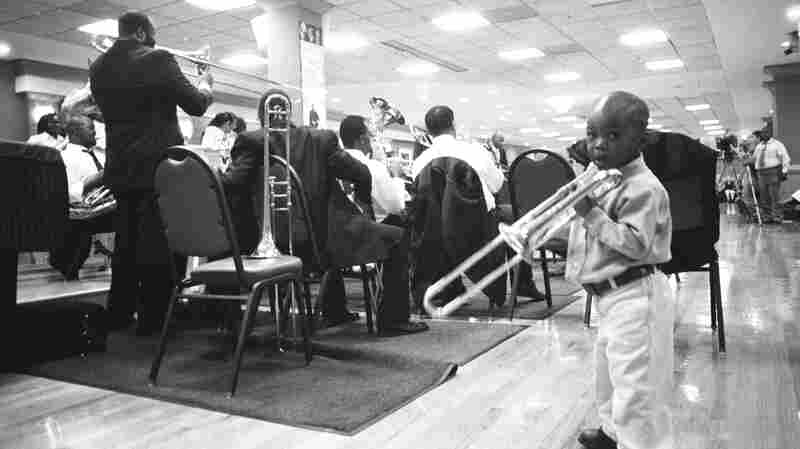 July 15, 2013 • In the Bible, Psalm 150 tells the faithful to praise the Lord with trumpet, harp, tambourine, stringed instrument and cymbal. In the United House of Prayer for All People, it's all about the trombones. No one knows exactly how trombones ended up in church, but it's an intensely vocal sound.