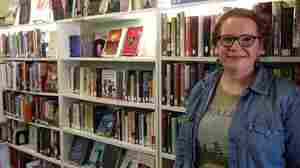 October 21, 2013 • In a sleepy town in the Ozarks, population 300, one woman is trying to turn the local public library into a hub for learning. She's one of thousands of librarians around the country working to bring a sense of community to isolated areas. 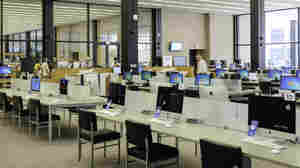 September 1, 2013 • Library or Apple store? The Digital Commons at the Martin Luther King Jr. Memorial Library in Washington, D.C., has more screens than it does books. It's just one example of the many ways libraries are remodeling to meet the needs of 21st century users. 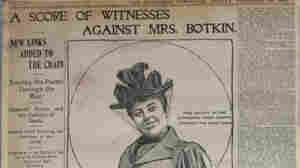 August 19, 2013 • Libraries have been digitizing their collections for years, but the materials can be hard to find. Enter the Digital Public Library of America. Worried that Google has an outsized hand in digitizing books, the DPLA is combining, on one site, the digital collections of libraries nationwide — free. 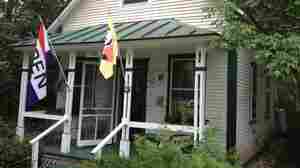 August 19, 2013 • Most Americans say public libraries are important to the community — but eight states don't actually support them. Texas has cut budgets drastically; in Vermont, local librarians must go hand in hand to town meetings every year. Neda Ulaby reports on the landscape of library funding across the U.S. 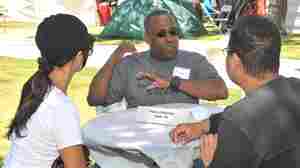 At a Human Library event at the Santa Monica Public Library, a police detective "book" talks to two "readers." Human Library events and projects, which are held at libraries across the country, allow participants to "check out" volunteers and have conversations about their life experiences. Annie Wyndham Solomon (Wynsolo Photography)/Santa Monica Public Library hide caption

August 13, 2013 • Librarians have to get creative to reach out beyond their faithful fans and engage with more members of their communities. So some libraries have started lending out tools like fishing poles, and others offer "human books" — volunteers with special expertise or interesting experiences. 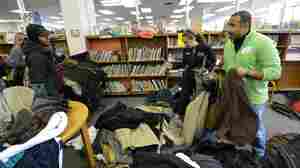 Volunteers at the Queens Library in the Far Rockaway section of Queens hand out coats to people affected by Hurricane Sandy. AFP/Getty Images hide caption

August 12, 2013 • In the wake of Hurricane Sandy, libraries in New York helped storm victims find documents, fill out forms, connect to the Internet and plan how to rebuild. There's a growing awareness of the important role libraries can play in disaster relief. 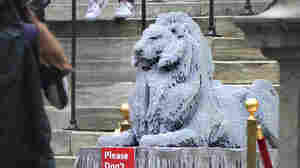 If a LEGO lion can take pride of place at the New York Public Library, why not video games in the reading rooms? The NYPLarcade program is a kind of book club for gamers, inviting participants to dive deep with discussions of strategy, game structure and more. Bebeto Matthews/AP hide caption

August 11, 2013 • In the 1800s, British libraries used gaming rooms to lure patrons away from pubs. Now, across the country, libraries are using video games to attract millennials — and the goal isn't always educational. 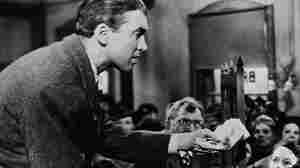 August 7, 2013 • In the latest installment of our library series, NPR's Bob Mondello visits some notable libraries in popular culture: Jorge Luis Borges' Library of Babel; Lucien's Library in Neil Gaiman's The Sandman; and the stacks in Buffy, Hogwarts, Doctor Who and Fahrenheit 451. 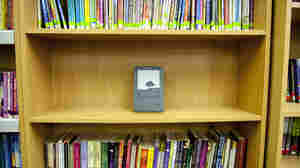 August 5, 2013 • E-books have changed the world of publishing in fundamental ways. The business model that encouraged publishers to support the work of public libraries has changed to such an extent that this relationship has been stressed to the point of non cooperation. 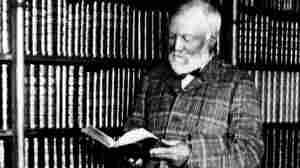 Carnegie ultimately gave away $60 million to fund a system of 1,689 public libraries across the country. "In bestowing charity the main consideration should be to help those who help themselves," he wrote. AFP/AFP/Getty Images hide caption

August 1, 2013 • At the start of the 20th century, the ruthless, self-made steel industrialist paid $60 million for 1,689 public libraries to be built in communities around the U.S. "The man who dies rich dies in disgrace," Carnegie wrote.