Accessibility links
U.S. Commutes: The Way We Get To Work Commuting to jobs is unavoidable, often undesirable and in some cases, getting longer. Nationwide, initiatives are helping to make commutes better. NPR explores some of these efforts and invites listeners to join the conversation using #NPRcommute. 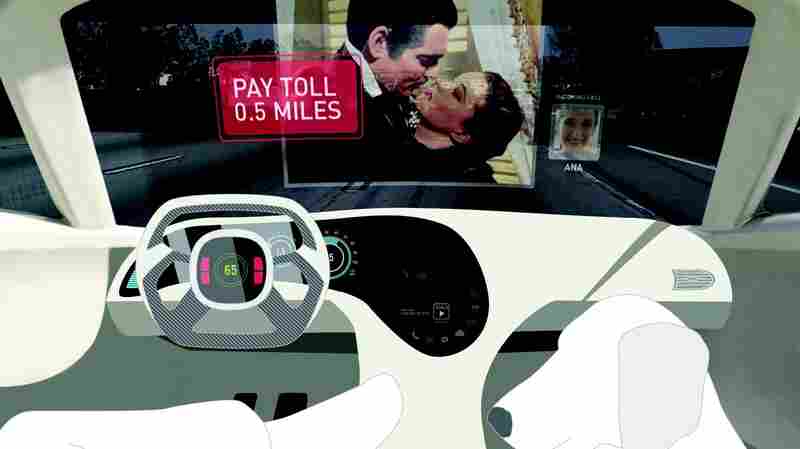 Imagine if the road ahead includes driverless cars. Jiha Hwang/Illustration from The Car in 2035: Mobility Planning for the Near Future is courtesy of the Civic Projects Foundation hide caption

toggle caption
Jiha Hwang/Illustration from The Car in 2035: Mobility Planning for the Near Future is courtesy of the Civic Projects Foundation

December 25, 2013 • Students thinking about the road ahead for transportation imagine everything from flying cars and hovercraft to crowdsourced car design and driverless vehicles. A key part of planning, says one expert, is that changes must not only make life better for commuters, they must also be done in a way "that this planet can support." 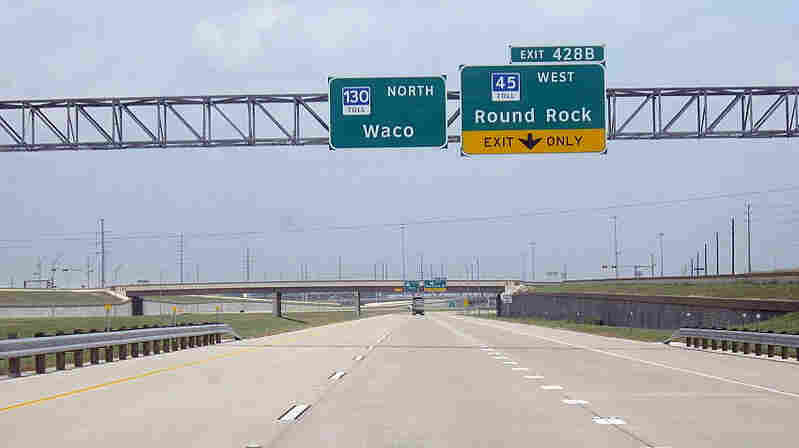 Texas Highway 130, a new Austin bypass toll road, is so far east of the city that it sees little traffic. The state recently raised the speed limit there to 85 mph in hopes of boosting its use. Wikipedia hide caption

December 17, 2013 • The Texas capital is growing rapidly, and its roads and freeways are packed. A toll road was built east of the city to help alleviate the problem, but few drivers use it. Experts agree that the city has to do something — and soon — to address its congestion woes if Austin is to retain its quirky character. 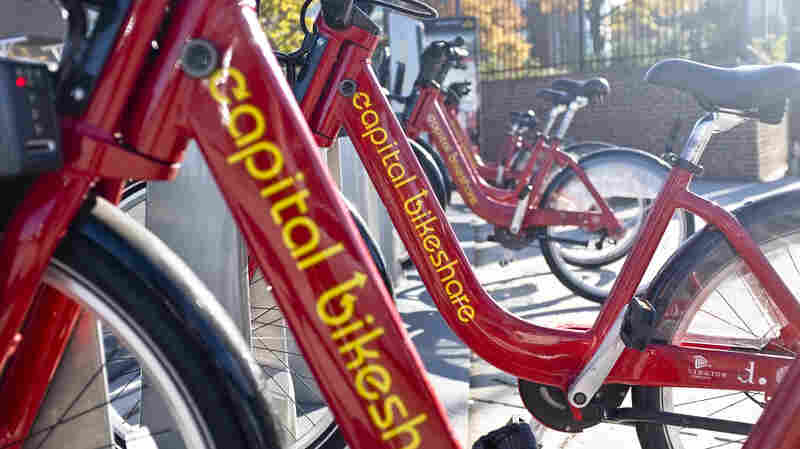 Bike-sharing is increasingly popular. But those who need it most often have the least access to it. Meredith Rizzo/NPR hide caption

December 12, 2013 • In the past few years, bike-sharing systems have popped up from Boston to Minnesota to Washington, D.C. The users so far tend to be young, male and wealthier than the rest of the population. 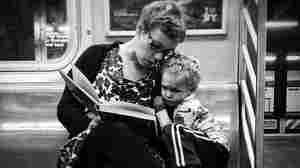 Original caption via Instagram: #pscommute 5:15 PM on the C Train. 34th Street, Penn Station back home to Fort Greene, Brooklyn. Giving the gift of reading. A magical moment between mother and son. It may seem like just another subway ride, but with a book and an imagination, the adventures are limitless. Jabali Sawicki/@jsawicki1/Instagram hide caption

With One Photo, The Average Commute Becomes Super Special

December 12, 2013 • We asked you to photograph your commute. We had no idea you would make such connections!

With One Photo, The Average Commute Becomes Super Special 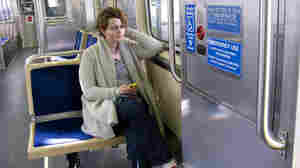 November 29, 2013 • You think your commute is bad? How about a two-hour trek to go a mere 15 miles? That's what one Chicago resident faces as she catches trains and buses to get to her part-time job. Commuting can be especially difficult for people who can't afford a car but live far from their jobs.

November 19, 2013 • Researchers think an increase in commuting may be partly to blame for widespread political disengagement among many Americans. As stressed-out commuters disengage, they leave the political arena to the most partisan voters. 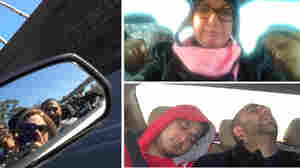 Neville Amaria's commute to work used to take up to 1.5 hours each way. He carpooled with colleagues including Stefanie McNally, Cristina Cooper and Bryan Kim. The gang passed the time by sleeping and snapping photos of unlucky commuters. Courtesy of Cristina Cooper hide caption

November 19, 2013 • About 10 percent of working Americans carpool to work. For two years, Neville Amaria was one of them. He spent two to three hours a day in the car with as many as four co-workers squeezed in alongside him. Now his office has moved closer to home. Here's an audio diary from the last morning of his carpool. 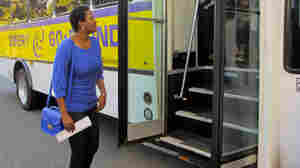 There were 1.5 million boardings on the Emery Go Round last year. Zikhona Tetana, a visiting scientist from South Africa, is taking the Emery Go Round to a Lawrence Berkeley National Laboratory facility in Emeryville. "It's convenient and always on time," she says. Cindy Carpien/NPR hide caption

November 13, 2013 • Emery Go Round is a free shuttle, provided by businesses in Emeryville, Calif. Not only did the popular shuttle help solve one of the most annoying problems for transportation planners known as the last mile, it helped the city reinvent itself as a home to headquarters for Pixar, Jamba Juice and Peet's Coffee. 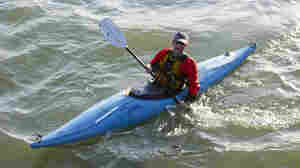 Stephen Linaweaver has been kayaking from Oakland, Calif., to work in San Francisco for four years. Courtesy of Dan Suyeyasu hide caption

Forget The Car Keys — This Commute Requires A Paddle

November 13, 2013 • Rather than traffic jams, kayak commuter Stephen Linaweaver has to look out for container ships. Every day, he paddles in his blue boat from the Port of Oakland to his job in San Francisco. His route may not be shorter than yours — but yours probably doesn't include harbor seals.

Forget The Car Keys — This Commute Requires A Paddle 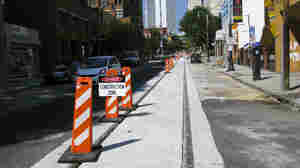 Construction of the Atlanta streetcar line has hurt many businesses along the route, but there is hope that economic gains will increase once the line opens next spring. Kathy Lohr/NPR hide caption

November 7, 2013 • In 2001, Portland, Ore., was the first to develop a new kind of streetcar system. Success there led to a resurgence, with at least two dozen cities planning, building or expanding trolley lines — places like Atlanta; St. Louis, Mo.; and Tucson, Ariz. But some wonder whether it's the best way to spend limited transit dollars. 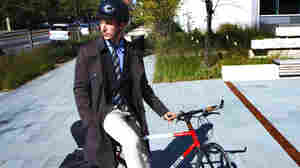 No Earbuds Allowed: 5 Songs For Commuting By Bicycle

November 7, 2013 • Soon-to-be London correspondent Ari Shapiro whipped up a playlist for NPR Music that's especially for commuters who travel by bicycle. Even though you should totally never listen to music and bike at the same time. 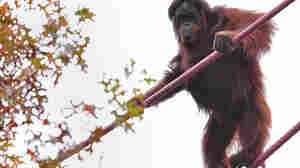 Orangutans can get exercise and look down their noses at zoo visitors, thanks to cables that stretch from one side of the primate habitat to the other. Karen Bleier/AFP/Getty Images hide caption

October 31, 2013 • If you commute to work, chances are you travel on roads or rails. A designer in Austin, Texas, wonders, "Why not up in the air?" In a nod to orangutans at the National Zoo who get around on wires 50 feet above the ground, designers see the potential for aerial mass transit. 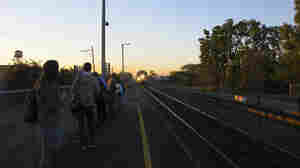 Reverse commuters, include Kathy LeVeque (in the foreground), wait for an approaching outbound Metra commuter train at the Mayfair neighborhood stop on Chicago's northwest side. David Schaper/NPR hide caption

October 29, 2013 • In many places, the reverse commute from city homes to suburban jobs is as congested as or worse than traffic going into the city. "It's just exhausting," says one reverse commuter, whose 35-mile drive to Chicago's southwest suburbs can take up to two hours depending on traffic. In cities where reverse commutes are common, transit agencies are trying to help. 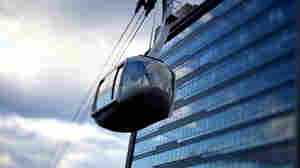 Commuters headed to Oregon Health and Science University use cars, bikes and streetcars to connect with Portland's aerial tram, which whisks them up and over south waterfront neighborhoods. David P. Gilkey/NPR hide caption

How To Solve A Sky-High Commuting Conundrum

October 25, 2013 • In Portland, Ore., doctors and patients get to the Oregon Health and Science University not by a twisty, two-lane road up Marquam Hill, but by a gleaming silver gondola. The aerial tram has cut the commute from up to 45 minutes to a three-minute ride in the sky.

How To Solve A Sky-High Commuting Conundrum 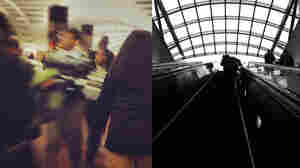 Becca Bullard commutes every day from Arlington, Va., via Metro's Virginia Square station to her work in downtown Washington, D.C. Her commute to work begins around 9 a.m. (left), and she arrives home around 6:30 p.m. (right). Courtesy of Becca Bullard hide caption

October 24, 2013 • A risky, expensive decision by local planners in the 1960s transformed Arlington, Va. — where everyone drove — to a place where people live, walk, bike, eat, play and commute, all without ever getting behind the wheel. 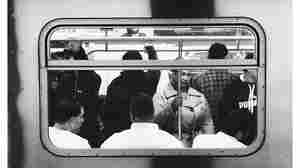 Planes, Trains And Gondolas: Your Commute In Photos

October 23, 2013 • This month we asked you to take a fresh look at your commute and photograph it. Here are some of our favorites.

More from U.S. Commutes: The Way We Get To Work
Browse archive or search npr.org