Accessibility links
Scoring The Screen Robert Siegel speaks with some of film's most thoughtful and high-profile composers — plus an up-and-comer — about what it means to tell a story with music, and how a score can enhance a scene. 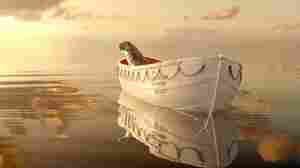 "Canadian culture is so new and almost nonexistent that it's easy for us to see through the eyes of other nations," says Mychael Danna of his scores. Danna won the 2013 Academy Award for his score for Life of Pi. 20th Century Fox hide caption

December 25, 2014 • Rachel Portman was the first female composer to win an Oscar, for her work on Emma. She talks to Robert Siegel about the process of setting the scene with music — without overdoing it.

Director John Carpenter On The Sound Of A Terrifying Film

December 24, 2014 • John Carpenter, famous for his cult-classic films (Halloween), is also behind soundtracks. Robert Siegel talks to him about how to scare an audience. His solo horror album, Lost Themes, is out Feb. 3.

Director John Carpenter On The Sound Of A Terrifying Film

How To Compose Music For A Movie About Music

How To Compose Music For A Movie About Music

Scoring The Screen: Thomas Newman And the Music Of 'Shawshank'

December 22, 2014 • Oscar-nominated composer Thomas Newman — whose credits include animated films like Finding Nemo and Wall-E to The Shawshank Redemption — kicks off our "Scoring the Screen" series with Robert Siegel.

Scoring The Screen: Thomas Newman And the Music Of 'Shawshank'