Accessibility links
Injured Nurses Nursing employees suffer 35,000 back and other injuries nearly every year. But many career-ending injuries could be prevented if hospitals brought in new technology. 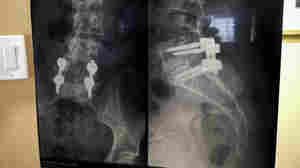 The X-ray of Tove Schuster's spine shows the metal cage and four screws her surgeon used to repair a damaged disk in her back. Daniel Zwerdling/NPR hide caption

February 4, 2015 • Nursing employees suffer 35,000 back and other injuries nearly every year. But many career-ending injuries could be prevented if hospitals brought in new technology and taught "safe patient handling." 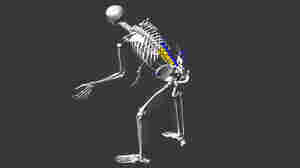 The screenshot from a simulation video shows the magnitude and distribution of forces NPR correspondent Daniel Zwerdling endured on his spine while re-creating the way nurses lift patients from their beds. Courtesy of the Spine Research Institute at The Ohio State University hide caption

February 11, 2015 • What exactly is happening to nurses' backs when they move and lift patients? NPR's Daniel Zwerdling teamed with scientists for a high-tech look inside his own back as he tried the same maneuvers. 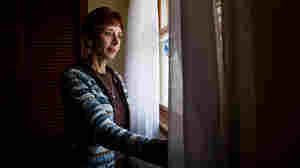 Terry Cawthorn was a nurse at Mission Hospital for more than 20 years. But after a series of back injuries, mainly from lifting patients, she was fired. Cawthorn took legal action against the hospital and still faces daily struggles as a result of her injury. Susannah Kay for NPR hide caption

Hospital To Nurses: Your Injuries Are Not Our Problem

February 18, 2015 • When Terry Cawthorn severely injured her back on the job, Mission Hospital refused to take responsibility — an attitude toward nurses that NPR found in hospitals across the U.S.

Hospital To Nurses: Your Injuries Are Not Our Problem 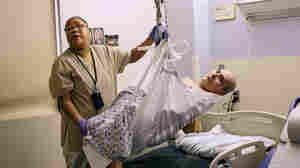 February 25, 2015 • The Department of Veterans Affairs is taking a lead among other hospital systems in the country to keep nurses and other staff from getting injured when they move and lift patients. 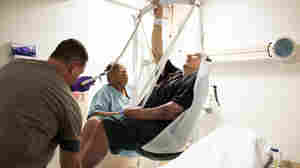 Michael Bolla and Sally Singer lift Leon Anders using a ceiling lift and sling at the VA Hospital in Loma Linda, Calif. The VA system is among a very small number of hospitals that have installed equipment and provided proper training so their nursing staff can avoid physically lifting and moving patients themselves. Annie Tritt for NPR hide caption

March 24, 2015 • While industry and government officials agree something needs to be done to prevent the tens of thousands of debilitating injuries among nursing staff, nobody can agree how to enforce it.