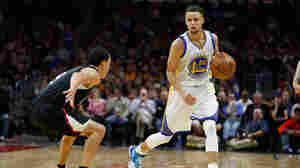 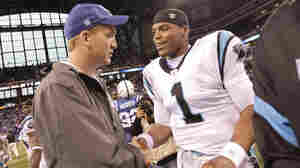 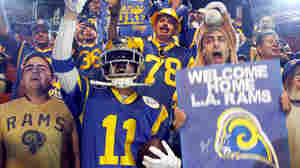 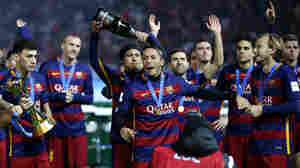 January 13, 2016 • It's called "the beautiful game," but sports commentator Frank Deford says that's because of who plays soccer, not because of how it's played. 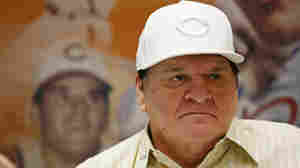 Pete Rose appears at an autograph signing event last month in Las Vegas. Baseball Commissioner Rob Manfred rejected Rose's plea for reinstatement, citing Rose's continued gambling and evidence that he bet on games when he was playing for the Cincinnati Reds. Without reinstatement, Rose can't be elected to the Hall of Fame. John Locher/AP hide caption

Rose Is Banned From Baseball, But What About Accused Steroid Users?

January 6, 2016 • Barry Bonds and Roger Clemens should be interrogated by the baseball commissioner the same way Pete Rose has been, opines sports commentator Frank Deford.

Rose Is Banned From Baseball, But What About Accused Steroid Users?

NBA Dares To Speak Out On Gun Violence

NBA Dares To Speak Out On Gun Violence 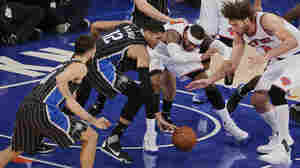 Dear NBA: Why So Many Games?

December 23, 2015 • Basketball players don't endure numerous concussions like some football players do, nor do they suffer the arm injuries common to baseball pitchers. But the grind on the hardwood can wear bodies down.

Dear NBA: Why So Many Games? 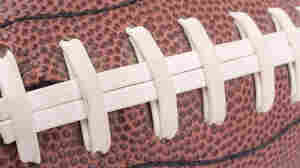 December 16, 2015 • When two teams play a game that doesn't count, call it what it is — an exhibition. Sports commentator Frank Deford reminds us that words, and their meanings, matter. 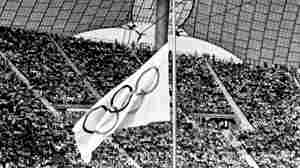 Olympic team members stand on the field as the Olympic flag flies at half-staff during a memorial service in the Munich Olympic Stadium in Germany on Sept. 6, 1972. Eleven Israeli team members were killed by Arab guerrillas at the Summer Olympic Games. A crowd of 80,000 filled the stadium to capacity. AP hide caption

December 9, 2015 • Frank Deford wonders why it took so long to build a monument commemorating the 11 Israeli athletes murdered by terrorists at the Munich Summer Olympics 43 years ago. 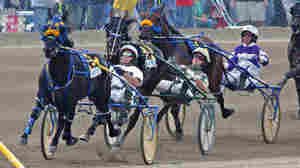 Remembering The Forgotten Of The Sports World

December 2, 2015 • Sports gets bigger all the time. But even in the biggest bull markets, there are always a few stocks that fail. The same is true in sports history. Whatever happened to the Little Brown Jug? Bowling?

Remembering The Forgotten Of The Sports World 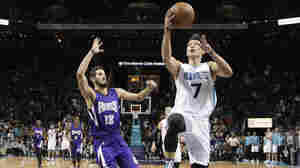 Charlotte Hornets' Jeremy Lindrives past Sacramento Kings' Omri Casspi in the second half of a game on Nov. 23. The Hornets won 127-122 in overtime. The Kings haven't won a championship since 1951. Chuck Burton/AP hide caption

There Are No Winners Without Losers

There Are No Winners Without Losers 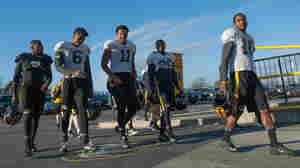 November 18, 2015 • Frank Deford wonders: Once the games are over, are the football players really accepted, or are they just hired hands? 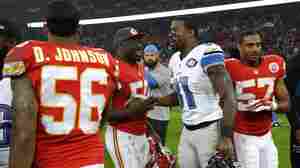 The NFL Is Kicking The Ball To The United Kingdom. Why?

November 11, 2015 • London soon will be hosting up to eight NFL games each fall. What's behind these plans to play so many regular season games across the pond?

The NFL Is Kicking The Ball To The United Kingdom. Why?

New England Patriots head coach Bill Belichick signals from the sideline in the second half of an NFL game against the Miami Dolphins on Thursday in Foxborough, Mass. Michael Dwyer/AP hide caption

Bill Belichick: Love Him, Hate Him, But Don't Deny He's An Original

November 4, 2015 • The time has come to recognize that Bill Belichick is the best pro-sports coach of this century, says commentator Frank Deford.

Bill Belichick: Love Him, Hate Him, But Don't Deny He's An Original 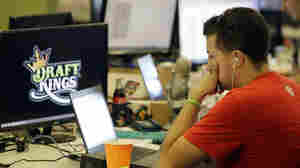 Devlin D'Zmura, a news manager at daily fantasy sports company DraftKings on Sept. 9. Customers of the two biggest daily fantasy sports websites — DraftKings and FanDuel — filed at least four lawsuits against the sites in October 2015. The customers accused the sites of cheating, and argued they wouldn't have played had they known employees with insider knowledge were playing on rival sites. Stephan Savoia/AP hide caption

States Should Get Into The Sports Gambling Game

October 28, 2015 • Commentator Frank Deford takes a close look at fantasy sports and concludes the profits to be made there are very real.

States Should Get Into The Sports Gambling Game