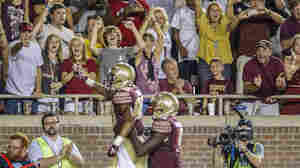 Florida State fans cheer Rashad Greene after a 74-yard touchdown pass in the fourth quarter of an NCAA college football game against Clemson in Tallahassee, Fla., on Sept. 20. In college sports, African-American student athletes and white student audiences are the norm. Commentator Frank Deford asks why this dynamic does not make us more squeamish. Mark Wallheiser/AP hide caption

September 24, 2014 • Commentator Frank Deford reflects on the owner of the Atlanta Hawks' controversial efforts to market the team to white audiences. 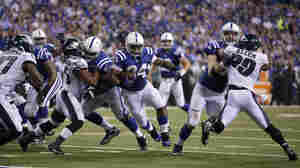 The NFL has had a lot of bad press lately. But it doesn't seem to have any impact on sponsors or fans. AJ Mast/AP hide caption

September 17, 2014 • The NFL has suffered a number of scandals recently, but the sport has emerged relatively unscathed. Commentator Frank Deford asks if anything could change the way Americans feel about football. 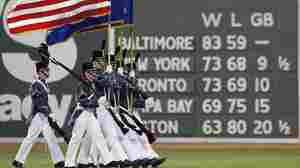 The Star-Spangled Banner, played before every baseball game, has become so tied to the sport that an old joke asks, "What are the last two words of the national anthem?" and answers, "Play ball!" Michael Dwyer/AP hide caption

September 10, 2014 • This Sunday marks the 200th anniversary of Francis Scott Key's penning of "The Star-Spangled Banner." As commentator Frank Deford explains, baseball and the national anthem go way back. 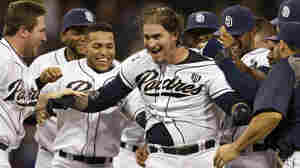 Yasmani Grandal is swarmed by teammates after hitting a walk-off single to beat the Los Angeles Dodgers on Friday. But commentator Frank Deford wonders why "walk-off" has become such a ubiquitous term. Gregory Bull/AP hide caption

September 3, 2014 • With baseball's pennant race in full swing, commentator Frank Deford takes a moment to examine an oft-used baseball phrase ... and imagines how sportswriters might apply it to big moments in history. 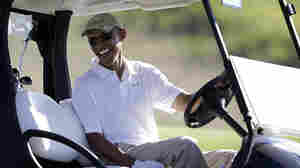 August 27, 2014 • President Obama has been widely criticized for not being combative enough. Commentator Frank Deford says we elected a basketball player, but ended up with a golfer.

August 20, 2014 • Forget peanuts and Cracker Jack. Sausages are the food most closely linked to the national pastime, says Frank Deford. 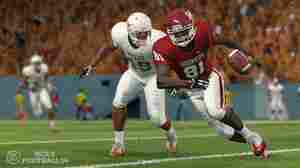 A judge recently ruled players should be paid for having their likenesses used in video games. EA Sports hide caption

August 13, 2014 • Frank Deford says that, with recent legal developments, the stage is set for college athletes to get paid for their performances. Will March Madness ever be the same again? 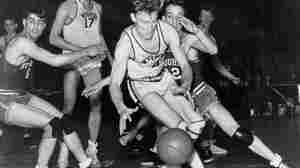 Commentator Frank Deford says part of why we can't do away with college sports is history. Football and basketball have always been tied to college. AP hide caption

August 6, 2014 • Commentator Frank Deford talks about the widely divergent age requirements in American sports leagues, and why there's no true minor league in football or basketball. 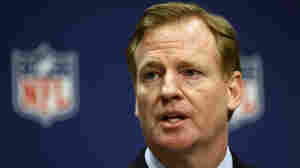 NFL Commissioner Roger Goodell at a press conference in May. Goodell's handling of concerns about concussions and controversies surrounding players has led commentator Frank Deford to wonder whether Goodell is up to the job. David Goldman/AP hide caption 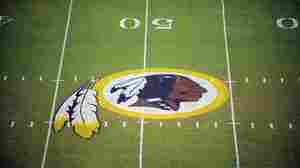 July 23, 2014 • As the NFL begins training camp, Commentator Frank Deford wonders why Washington's team keeps its contentious nickname. He suggests alternatives, like the Lobbyists, the Presidents or simply the Who. 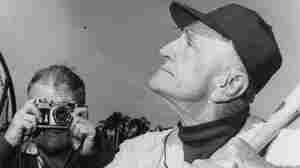 Charles Dillon Stengel had been known as Dutch — derived from the German Deutsch. Only after the U.S. went to war was Casey Stengel born. AP hide caption

July 16, 2014 • This summer marks the 100th anniversary of the beginning of World War I. Commentator Frank Deford considers the war's unlikely impact on American sports. 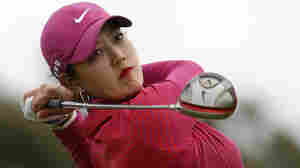 American golfer Michelle Wie was a child prodigy. As an adult, she might just be the best female golfer in the world. Tim Hales/AP hide caption

A Golf Prodigy Grows Up, And Goes All The Way To The Top

July 9, 2014 • Child actors are infamous for burning out young. Not so for child athletes, says commentator Frank Deford. Michelle Wie, the 24-year-old golfer, may now be the best-known golfer in the world.

A Golf Prodigy Grows Up, And Goes All The Way To The Top 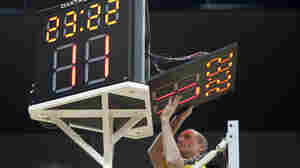 The Time Of Our Sports Lives: How Europe's Games Neglect The Clock

July 2, 2014 • In Europe, soccer and tennis matches can drag on and on. Not so stateside, where basketball and football play by the clock. That's the American way, says commentator Frank Deford, so move it!

The Time Of Our Sports Lives: How Europe's Games Neglect The Clock 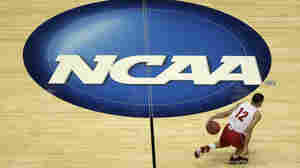 Wisconsin's Traevon Jackson at practice for the 2014 NCAA men's college basketball tournament. Commentator Frank Deford says that, despite NCAA claims to the contrary, most college players are not typical students — "their job is to play a sport." Jae C. Hong/AP hide caption

Deford: NCAA Says Amateurism Is Alive And Well, But The Jig Is Up

June 25, 2014 • In a trial underway in California, the NCAA is arguing that college ball players should not be paid. But every coach knows that many players are not typical students, says commentator Frank Deford.

Deford: NCAA Says Amateurism Is Alive And Well, But The Jig Is Up 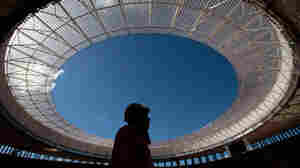 Deford: How To Host A Sports Extravaganza That Won't Break The Bank

June 18, 2014 • Building new World Cup or Olympics facilities in different cities every several years is just too costly, says commentator Frank Deford. So why not, he asks, try something different?

Deford: How To Host A Sports Extravaganza That Won't Break The Bank