Accessibility links
This I Believe Beginning in 1951, radio pioneer Edward R. Murrow asked Americans from all walks of life to write essays about their most fundamental and closely held beliefs. Half a century later, NPR, Atlantic Public Media and This I Believe, Inc. are partnering to recreate 'This I Believe' on the air and online.

May 22, 2008 • Laura Hall used to hate the hip-hop music her husband listened to. But when she had to quit school and take a factory job to support her family, Hall started to hear the songs in a new way. Now she says hip-hop is a source of inspiration for her.

May 11, 2008 • Listener Holly Dunsworth says she doesn't need faith or hope to believe evolution. The Penn State paleoanthropologist says evolution "just is" — and helps her understand how she came to be and how humans are connected to all living things.

May 5, 2008 • Taking her first communion led San Francisco writer Sara Miles to become a Christian. The idea of breaking bread with others inspired her to start a food pantry at her church. Miles believes we come to know God through service to strangers.

April 27, 2008 • When Dr. Donald Rosenstein discovered his son was autistic, he grieved the loss of many of his own dreams. But in watching his son grow, Rosenstein came to believe in the ability people have to adapt to, and even find joy in, difficult circumstances.

The Time to Help Is Now

April 21, 2008 • High-school senior Maria Zapetis has a comfortable life, but an experience at a summer camp taught her that many people around the world aren't so fortunate. Now the Miami student believes she has a role in fighting global hunger and poverty.

April 13, 2008 • As the U.S. enters its fifth year at war, Aileen Mory says she finds it chilling that the nation's troops are risking their lives thousands of miles away, while her life has remained unchanged. Mory believes living in a democracy means we should share equally in its burdens. 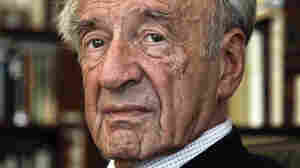 April 7, 2008 • During the Holocaust, Elie Wiesel's family members were killed in Nazi camps, and he was held at Buchenwald. The Nobel laureate came to believe it was his job to share his memories of the atrocities.

March 30, 2008 • College administrator Carole Chabries had three pregnancies in three years, but two of her children were born prematurely and died. The daughter who lived has helped Chabries come to appreciate the complexities and frailties of the human body.

March 24, 2008 • Chemist John Warner is proud of the new compounds he's helped create. But when his son died from liver failure, Warner began to wonder why he was creating those chemicals at all. Now he believes in challenging the old assumptions of science.

March 16, 2008 • How much do you tell your kids about drugs, death or sex? Martha Leathe believes in being honest with her children, even when it makes her uncomfortable. Being honest with them, Leathe says, leads them to be more open and truthful with her.

March 10, 2008 • Cellist Yo-Yo Ma was born in France to Chinese parents, and he has lived in the U.S. since he was seven. Instead of trying to choose among these cultural roots, Ma decided to embrace them all. He believes doing so has enriched his life and music.

March 2, 2008 • Laurie Granieri believes in the 40-hour work week. She loves being a newspaper reporter, but after watching her father become consumed by his job, she decided to start leaving the office at five o'clock to go enjoy the rest of her life.

February 25, 2008 • The Guinness World Records book fascinated Juliet Frerking when she was a child. Beyond the oddball accomplishments it listed, the book inspired Frerking to attempt feats in her own life that people told her were impossible.

February 17, 2008 • Looking down from the International Space Station, astronaut Dan Tani says he can't help feeling hopeful about the future of the planet. "I am stunned by the intense colors of the Earth," he says, "The intricate patterns and textures, and sheer beauty of our home."

Listen
More from This I Believe