Accessibility links
War, Remembrance and Rebuilding in Vietnam The last U.S. troops left Vietnam three decades ago, marking the end of the Vietnam War. A weeklong series examines the conflict's legacy on the Southeast Asian nation -- the progress since 1975 and the scars left behind. 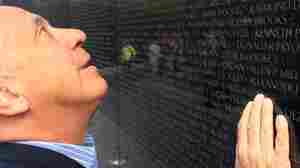 May 1, 2005 • NPR's Michael Sullivan has been travelling along Route One in Vietnam from the North to the South. He reports from Ca Mau, the southernmost province of Vietnam where Sen. John Kerry and his swiftboat colleagues spent a great deal of time during the war. The province boasts a lot of small-scale shrimp farming, but very little foreign investment.

April 30, 2005 • Parades and performances in Vietnam's Ho Chi Minh City -- once known as Saigon -- mark the 30th anniversary of the end of the war with the United States. One Vietnamese veteran who fought on the side of U.S. troops offers his thoughts.

April 30, 2005 • Holley Watts was one of more than 600 women who went to Vietnam as a hospitality worker for the Red Cross. Her experiences are described in her book, Who Knew? Reflections on Vietnam.

April 30, 2005 • Thirty years after flying off the roof of the U.S. Embassy, on one of the last helicopters out, NPR's Loren Jenkins recalls the last day of the Vietnam War from downtown Saigon, now Ho Chi Minh City.

April 30, 2005 • Saigon, now Ho Chi Minh City, remains at the heart of Vietnam's economy. The city was thrown for a loop after reunification, when new economic policies snuffed out much of its entrepreneurial spirit. But the phoenix has risen from the ashes.

April 29, 2005 • Thirty years ago, American ended its involvement in Vietnam. NPR's foreign editor, who covered the fall of Saigon, went back to see what has happened since and says much remains the same.

April 29, 2005 • Alex Chadwick shares his journey to Vietnam on the eve of the 30th anniversary of the end of the Vietnam War and the defeat of South Vietnam forces by the communist Viet Cong. American travelers share their reasons for coming to the capital city of Hanoi.

April 29, 2005 • NPR Senior Foreign Editor Loren Jenkins was a reporter for Newsweek in Saigon when the city fell to the North Vietnamese in late April 1975. He recounts the chaotic final hours at the U.S. Embassy as the last Americans pulled out of Vietnam.

April 29, 2005 • In the fifth part of our Vietnam series, Michael Sullivan travels to Quang Ngai province, where the massacre of My Lai occurred in 1968. Now, 30 years after the end of the Vietnam War, it seems old wounds are slow to heal.

April 29, 2005 • Commentator William Short was an American soldier who decided he could no longer fight in Vietnam. His refusal to take human life led to his being court-martialed and imprisoned. In recent years, Short has compiled the stories of other soldiers who acted out against the war.

April 28, 2005 • During the 1968 Tet Offensive, North Vietnamese and Viet Cong forces surprised U.S. troops with a major assault. Fighting ravaged the former imperial city of Hue, and presaged the futility of the U.S. military effort in Vietnam. The decades since have brought more change.

April 27, 2005 • Commentator Sonny Le was born in South Vietnam. He recalls the communist takeover of his country and his family's life after reunification.

April 27, 2005 • This week marks the 30th anniversary of the end of the Vietnam War. In the third installment of our weeklong series, NPR's Michael Sullivan visits the poor north-central province of Nghe An, which suffered badly during the war -- and is the birthplace of the country's most honored leader.

April 26, 2005 • In the second installment of a weeklong series on the end of the Vietnam War, Michael Sullivan looks at Hanoi, once the capital of North Vietnam and now the capital of a nation reunified under communist rule.

Listen
More from War, Remembrance and Rebuilding in Vietnam