Accessibility links
The Long View "The Long View" is an occasional series of Morning Edition conversations with people of significant experience, people who can both reflect on the past and look ahead to the future.

December 25, 2009 • She's worked with some of the biggest names in Hollywood for the past three decades, including Tom Cruise, Robert Redford, Demi Moore and Will Smith. As part of our series called The Long View, Renee Montagne interviews legendary publicist Pat Kingsley and learns that the job often means keeping things quiet. 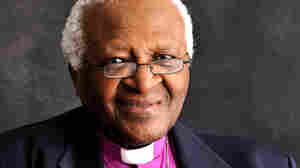 Archbishop Desmond Tutu is the author of Made for Goodness — written with his daughter Mpho Tutu, also a priest in the Anglican communion — and several other reflections on faith, forgiveness and reconciliation. Cameron Davidson hide caption

March 11, 2010 • The South African cleric and human-rights activist Desmond Tutu joins Renee Montagne to reflect on his long life and his lasting message about forgiveness and reconciliation. His new book, Made for Goodness, is an explanation of his personal sense of spirituality and an invitation to share in his beliefs about the basic goodness of humanity. 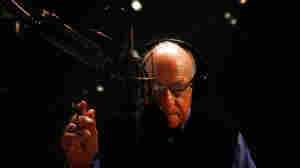 December 30, 2009 • Carl Kasell has delivered the news on Morning Edition since its very first broadcast. After 30 years, he's focusing on other duties at NPR. We look back at his career — as a local DJ; a game show announcer — and the magician who dared to saw Nina Totenberg in half.

Liz Smith Dishes On Her Feuds With Sinatra, Trump

December 24, 2009 • As part of Morning Edition's series "The Long View," gossip columnist Liz Smith talks to Renee Montagne about hobnobbing with the boldface names of New York. The Grand Dame of Dish shares the secret of her success, and dishes on her legendary feuds with Frank Sinatra and Donald Trump.

Liz Smith Dishes On Her Feuds With Sinatra, Trump

September 15, 2008 • When investor Wilbur Ross was at Yale, he took an English course that required writing 1,000 words a day. After two weeks, he ran out of things to say. The billionaire jokes that dropping it "probably saved me from a life of poverty."

July 23, 2008 • With the Olympics in Beijing less than a month away, the global spotlight is on China — and its treatment of Tibet. The Dalai Lama's chief negotiator, Lodi Gyari discusses the protests, the Olympics, and the best way for Tibet to push for autonomy.

February 15, 2008 • Lupita Tovar was just a teenager when a Hollywood scout discovered her in Mexico City. Nearly seven decades and one postage stamp later, the star of the Spanish-language version of Dracula has no regrets.

Norman Lear, from TV to Activism

February 14, 2008 • Norman Lear went from producing hit TV shows like All in the Family to political activism, including efforts to get young people to vote. The 85-year-old Lear says both involve a lifelong passion.

Norman Lear, from TV to Activism

December 31, 2007 • Entertainment legend Eartha Kitt's career follows a challenging childhood that included picking cotton in her native South Carolina and joining the Katherine Dunham Dance Troupe. At 80 she still enjoys performing and goes to the gym regularly, but beyond that she's a homebody.

December 27, 2007 • Alan Greenspan, the former chairman of the Federal Reserve, insists the housing bubble had relatively little to do with him. After guiding the economy for 19 mostly prosperous years, he now faces criticism for drastically lowering interest rates.

Brazelton: Listening to Children — and Their Parents

May 10, 2007 • Dr. T. Berry Brazelton's career as a pediatrician spans six decades. His basic advice hasn't changed: Trust your baby to tell you when you're on the right track — and when you're not.

Brazelton: Listening to Children — and Their Parents

Iacocca Says Detroit Is Living in the Past

April 26, 2007 • U.S. automakers are in trouble because they haven't been paying attention to the success of hybrid vehicles and other market trends, Lee Iacocca says. He says Detroit will need a Manhattan Project-like push to shed fossil fuels.

Iacocca Says Detroit Is Living in the Past

April 24, 2007 • Ruth Westheimer was over 50 when she began her career advising in a very public way — on the most private of matters. For Dr. Ruth, now 78, the key to a happy life is healthy sex. Sexuality education, as she calls it, is serious stuff, but must be taught with some humor, she says.

April 23, 2007 • Before he was Hef, Hugh Marston Hefner was the son of a couple from Nebraska, growing up on Chicago's Westside, at a time when it was still prairie. Today, a reality show chronicles the lives of Hefner's three blonde live-in girlfriends.

April 18, 2007 • Kanan Makiya was one of the leading Arab intellectuals calling for the removal of Iraqi dictator Saddam Hussein. He said before the invasion that Americans would be welcomed by Iraqis as liberators. But now he questions his assumptions in supporting the war.

April 10, 2007 • Sen. Ted Stevens of Alaska has held his office for nearly 40 years, making him the chamber's senior Republican. He joins many observers in ruing the recent shift toward partisanship and people "who do politics all the time."

March 30, 2007 • If you tune in to the Final Four this weekend, you can be sure that John Wooden is watching, too. The great college basketball coach is pulling for his old team, UCLA, though he's not in love with the way basketball is played these days.

December 29, 2006 • Considered by many the greatest living choreographer, Merce Cunningham's career began with Martha Graham and spans 60 years of innovations in dance and music. At 87, Cunningham is still creating new works and he remains on the leading edge of dance.

Life Is a Collage for Artist Betye Saar

December 28, 2006 • "The Liberation of Aunt Jemima" -- a broom-toting, gun-wielding African-American woman -- established the reputation of artist Betye Saar. That was in 1972. At age 80, she's still combining scraps and souvenirs of the past into provocative works of art.

Life Is a Collage for Artist Betye Saar

Stan Lee on Realism in the World of Comic Heroes

December 27, 2006 • Stan Lee reflects on a lifetime of creating comics, including some imperfect superheroes. Spiderman, one of Lee's best known characters, was human first and super second. Lee tells Renee Montagne how he brought realism to a fantasy world.

Stan Lee on Realism in the World of Comic Heroes

December 26, 2006 • For more than 50 years, the Rev. James Lawson has taught and practiced the principles of non-violent resistance. The Vanderbilt University professor talks with Steve Inskeep about how those principles apply in a time of war.

December 22, 2006 • Author Lillian Ross talks to Steve Inskeep about her techniques and the subjects she has profiled for her work at The New Yorker, where she has been writing since 1945.