Accessibility links
American Anthem NPR brings you a year of stories about songs that rouse, uplift or call to action. 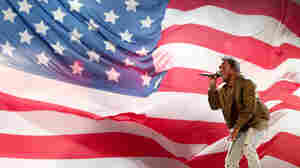