Accessibility links
Looking Back At Israel's Decade Of Netanyahu Israeli Prime Minister Benjamin Netanyahu has been back in power for a decade. In a series of stories, NPR explores how Israeli attitudes have shifted further to the right during his administration. 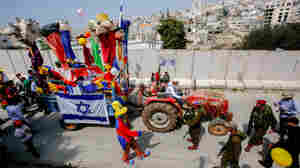 April 8, 2019 • In one of his last campaign moves, Prime Minister Benjamin Netanyahu made a far-right pledge: If re-elected, he would annex Jewish settlements in the occupied West Bank.

April 8, 2019 • Prime Minister Netanyahu says he will annex Israeli settlements in the occupied West Bank if he is re-elected. Netanyahu made the surprising announcement ahead of Tuesday's election. 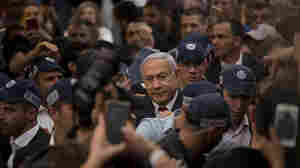 April 6, 2019 • Israelis go to the polls this Tuesday, April 9. A win by Netanyahu could make him the country's longest-serving prime minister — and take Israel further to the right.

What To Know About Israel's Elections

April 7, 2019 • Israeli Prime Minister Benjamin Netanyahu is dogged by corruption allegations but could be re-elected as the country votes Tuesday. His main challenger is a retired general promising clean government.

What To Know About Israel's Elections

How Israeli Attitudes Toward Democracy Have Changed Under Benjamin Netanyahu

April 4, 2019 • Under 10 years of Benjamin Netanyahu Israel's democracy has been put to the test in new ways — with new laws declaring Israel a Jewish state and making work tougher for left-wing advocates.

How Israeli Attitudes Toward Democracy Have Changed Under Benjamin Netanyahu 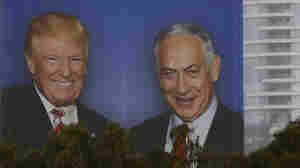 April 1, 2019 • The Israeli leader and his Likud party are waging a mudslinging campaign on social media, taking a page from the prime minister's close ally President Trump in style and substance.

More from Looking Back At Israel's Decade Of Netanyahu
Browse archive or search npr.org