Accessibility links
Profiles Of America In Full Employment With the jobless rate at a near 50-year low, employers are struggling to fill open positions. An NPR series looks at the consequences and impacts of an economy at full employment. 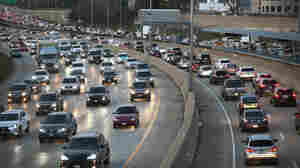 With the economy humming, U.S. unemployment is at a nearly 50-year low. Shouldn't we be excited? Scott Olson/Getty Images hide caption

May 20, 2019 • U.S. unemployment is at a nearly 50-year low. The jobless rate for Hispanics has never been lower. The past two years have been the best job market ever for African Americans. Shouldn't we be excited? 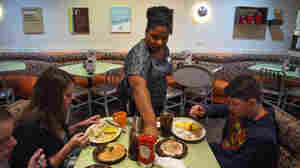 Tanisha Cortez waits on a table at a restaurant in Ames, Iowa. When the previous restaurant she worked for closed, Cortez applied to others and had job offers right away. Jobs are plentiful in Ames, a small city of more than 65,000 residents tucked amid farm fields north of Des Moines. Olivia Sun for NPR hide caption

May 23, 2019 • Ames, Iowa, has an unemployment rate of 1.5%, making it the tightest job market in the country. That's great for workers — but a challenge for those looking for them. 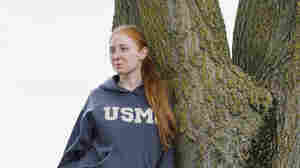 Courtney Hering, who is getting married next year, is planning a slightly more lavish wedding reception. After seven years at Kohler, she finally feels like she has found a professional home. Sara Stathas for NPR hide caption

May 21, 2019 • For years after the Great Recession, employers were reluctant to boost wages. Now a tight labor market is giving workers the leverage they need to demand a larger slice of the nation's economic pie. 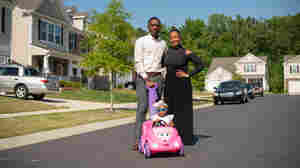 Sam Smith, Brittany Smith and their daughter Erelah outside their Charlotte home. The Smiths moved to Charlotte looking for change and opportunity. They are part of an influx of African Americans to Mecklenburg County, where the African American population has ballooned by 64% since 2000. Swikar Patel for NPR hide caption

May 23, 2019 • At a time of low unemployment for African Americans, educated, well-connected professionals are starting new lives in cities such as Charlotte, N.C. 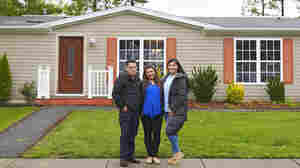 The Martinez family stands in front of their home in New Jersey. During a speech at her graduation, Alondra said to her parents: "Mamá, papá, lo logramos." Mom, dad, we made it. Mohamed Sadek for NPR hide caption

May 25, 2019 • Latino joblessness has dipped to historic lows. But many economists are taking those numbers with caution: There's still a gaping wage difference with white workers. 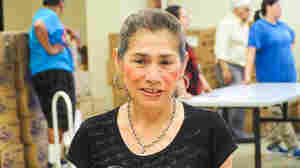 July 3, 2019 • At a time when the United States is enjoying the lowest unemployment rate in a half-century, California's Imperial Valley suffers from a shortage of good jobs. 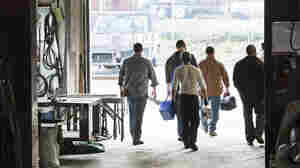 The long economic recovery has brought unemployment to historic lows. But the number of men in the labor force during their prime working age has dropped significantly over the past 50 years. Jetta Productions Inc./Getty Images hide caption

December 5, 2019 • The long economic recovery has brought unemployment to historic lows. But the number of men in the labor force during their prime working age has dropped significantly over the past 50 years. 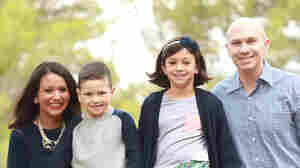 Gaby Gemetti decided to leave the workforce after having her second child. In March she started a "returnship," a new type of program to recruit and retrain women like her who are looking to resume their careers. Here, Gaby and John Gemetti are seen with their children, Carlo and Gianna. Courtesy of Shannon Wight Photography hide caption

May 20, 2019 • Over the past three years, women returned to the workforce at more than double the rate of men. Growth in industries that rely on women and heavy recruitment of women might help explain why. 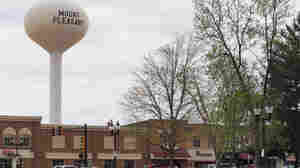 A lot of Iowa business owners in towns like Mount Pleasant are facing chronic labor shortages. One solution is to encourage more outsiders to come to the state, including immigrants. Jim Zarroli/NPR hide caption

May 21, 2019 • Business leaders worry that tough laws against undocumented workers will discourage legal immigrants from coming to the state to work. Iowa's low jobless rate has left businesses struggling to hire. 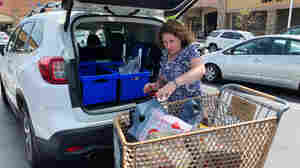 "I had one day I worked six hours and made $50. It really wasn't worth it. ... But it doesn't happen that often," says Hilary Gordon, who works as a shopper for the grocery delivery app Instacart in a suburb of Sacramento, Calif. "The other day I worked 11-and-a-half hours and made $265. Great? No. But good." Alina Selyukh/NPR hide caption

May 25, 2019 • After two master's degrees and three children, Hilary Gordon is one of the women who now make up more than half of the contractors at food delivery apps like Instacart. NPR spent a day with her. 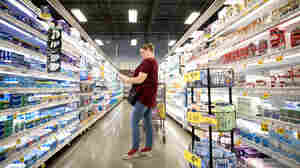 Teri Smith is one of over 130,000 workers who shop for and deliver groceries for Instacart. Smith, 46, has worked for Instacart in Arlington, Texas, since August 2018. Allison V. Smith for NPR hide caption

At The Mercy Of An App: Workers Feel The Instacart Squeeze

November 25, 2019 • The grocery-delivery app faces a new wave of discontent. Working for an algorithm means tweaks can upend a livelihood — and being a faster, nicer, more experienced worker doesn't guarantee better pay.

At The Mercy Of An App: Workers Feel The Instacart Squeeze

Dani Izzie at her home in rural Virginia. More than a decade ago, she slipped in the bathroom and suffered a spinal cord injury that has left her unable to walk. She works as a social media manager for Spinergy, a company that makes high-performance wheels for wheelchairs. Greg Kahn for NPR hide caption

May 22, 2019 • The nation's disability rolls swelled during the Great Recession. But more disabled people are now finding work, and employers are more willing to make allowances, thanks to the tight job market. 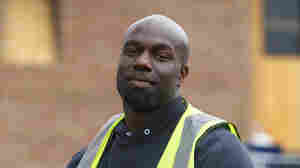 May 23, 2019 • People convicted of felonies often have difficulties getting hired. But many employers say they're suffering a labor shortage, and attitudes toward hiring people with criminal records are changing.