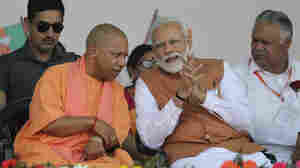 April 14, 2019 • Many see India's election as a turning point in which the country may seek to redefine itself via Hinduism, its majority faith. Secularism has become "a four-letter word," says one expert. 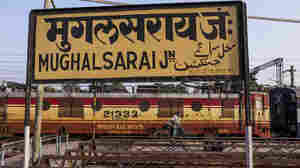 The name of India's Mughalsarai railway station, near Varanasi, was changed last year to Deen Dayal Upadhyaya, for a right-wing Hindu leader who died there in 1968. Dhiraj Singh/Bloomberg via Getty Images hide caption

April 23, 2019 • Officials have been altering names to become more Hinducentric. "It is very dangerous for national integrity and unity," says a historian. The changes accelerated ahead of this year's elections. 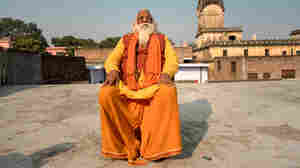 Satendra Das, 80, is the chief priest in waiting for the Ram temple, which has not yet been built in Ayodhya. Furkan Latif Khan/NPR hide caption 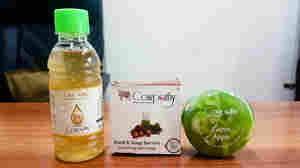 Some of the products on sale at Umesh Sonia's boutique in Mumbai include bottles of distilled cow urine, soap made from cow dung, floor disinfectant made from cow urine, under-eye gel and toothpaste made from cow excrement. This is part of a growing retail market in India. Sushmita Pathak/NPR hide caption

April 28, 2019 • Ayurvedic products and treatments based on ancient Indian healing practices are part of a multibillion-dollar industry. A yoga guru with ties to Prime Minister Narendra Modi has built a retail empire. 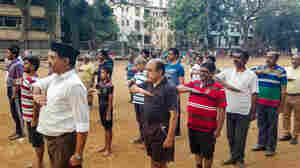 Members of the Rashtriya Swayamsevak Sangh, or RSS, stand at attention and salute a saffron-orange flag at a morning shakha, or drill session, in a park in suburban Mumbai, India. Lauren Frayer/NPR hide caption

May 3, 2019 • The Rashtriya Swayamsevak Sangh, or RSS, is close to Prime Minister Narendra Modi and holds an outsize influence on national policy. Its goal: to redefine India according to the Hindu faith. 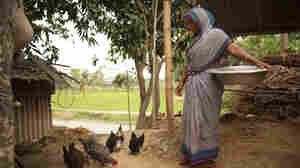 Tobiron Nessa, 45, is the only member of her immediate family whom the Indian government recognizes as a citizen. Her husband and five children have all been left off the National Register of Citizens even though she says all have Indian birth certificates. Furkan Latif Khan/NPR hide caption

May 10, 2019 • The northeastern state of Assam left some 4 million people, mostly Muslims, off its citizenship register last year. At the same time, India is seeking to offer citizenship to non-Muslim foreigners.