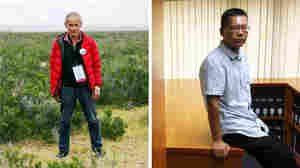 Left: Russell Low's relative emigrated from China to work on the Transcontinental Railroad in the U.S. Right: Teng Biao, a civil rights lawyer, fled China in 2014 after he became targeted by the Chinese government for challenging the constitutionality of certain laws. Terray Sylvester/Reuters and May Tse/South China Morning Post via Getty Images hide caption

What It's Like To Live With A Foot In China, Another In The U.S.

June 4, 2019 • In a special series, Morning Edition discovers the experiences of people affected by the deepening tensions between the world's two largest economies.

Chinese Students Are Under Suspicion In China And The U.S.

June 4, 2019 • As trade and other tensions mount between the United States and China, some Chinese students studying in America say they feel they're increasingly under suspicion.

Chinese Students Are Under Suspicion In China And The U.S.

Pushing For Academic Freedom In China

June 3, 2019 • Some people have a foot in the U.S. and China. We visit Duke University's satellite campus in China. The vice chancellor, an American, allows debate — knowing the Communist Party is active on campus.

Pushing For Academic Freedom In China

'Throughline' Examines An American Who Became A Chinese Revolutionary

'Throughline' Examines An American Who Became A Chinese Revolutionary

June 12, 2019 • What do people in China think of America? And how do Americans describe China? For answers, we interview people on the street in China and in Baltimore, Md.

June 11, 2019 • Chinese immigrants helped build America's first transcontinental railroad in the 1860s, but their contribution has been largely forgotten. A group of their descendants is trying to change that.

An Inside Look At The Tech Giant Huawei

June 10, 2019 • A visit to Huawei in China offers an inside-look at the tech giant's operations, and a look at how concerns are handled about alleged back doors in the technology posing a risk to other countries.

An Inside Look At The Tech Giant Huawei

Cybersecurity Official On Bridging The Divide Between The U.S. And China

June 10, 2019 • Andy Purdy once was a top cybersecurity official for the U.S. government. He works now for the Chinese tech giant Huawei — heading their cybersecurity team in the U.S.

Cybersecurity Official On Bridging The Divide Between The U.S. And China

June 8, 2019 • Huawei has become one of the world's biggest manufacturers of cellphones and high-end telecom equipment. Its rise has come with multiple accusations of technology theft.

Sun Yat-sen's Connection To China And The U.S.

June 7, 2019 • We look at the life of Sun Yat-sen, a founder of modern China, who spent time in exile in the United States.

Sun Yat-sen's Connection To China And The U.S.

June 6, 2019 • A U.S.-educated technocrat is at the forefront of the fledgling philanthropy movement in China. He was inspired to teach China's wealthy how to donate their money after spending time in the U.S.

June 5, 2019 • Steve Inskeep talks to human rights lawyer Teng Biao, who fled his native China in 2014. He now lives in the United States, but says he still feels the reach of the Chinese Community Party.