Accessibility links
America's Shifting Ground Cities sprawl and highways clog: millions of local decisions are translating into a nation that some say is increasingly unrecognizable. Shifting Ground tells small tales that reveal big truths about America's changing landscape. We ask: How can individuals and communities shape a better future? 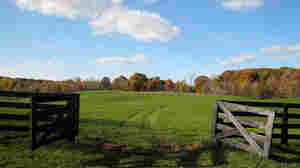 Joan Graham's idea is to turn her land into an environmentally friendly cemetery; she's betting that down the road, people will think twice before building a shopping mall on what was once a sacred human burial ground. David Baron for NPR hide caption

December 30, 2009 • A few years ago, trees started coming down across the road from Joan Graham's Michigan horse farm. She set in place a plan to conserve her land after her death by giving it to a conservancy. But just to be safe, she added a grave twist: She would have her body — and anyone else who wanted to join her — buried on the land.

September 2, 2008 • Osceola County businesses gave their tourist strip a green makeover by planting trees, but billboard owners balked because the landscaping obscured their signs. State lawmakers stepped in to protect the advertising, and the trees were cut back. Now residents are left asking: "Who controls the view on a public highway?"

June 17, 2008 • Many dream of owning beachfront property. But when an encroaching shore swept under the Porter's Surfside, Texas, home, the government told them they had to remove the house from what was now a beach.

April 9, 2008 • Clean wind energy sometimes comes at the cost of preserving rural vistas. Choosing between the two has divided residents — and even father and sons — in one upstate New York community.

March 11, 2008 • Private conservation agreements — which are often meant to last forever — have protected millions of acres across America, but an unanswered question looms. If circumstances change, can "forever" be undone? That question is at the heart of a legal battle in Johnson County, Wyo.

February 28, 2008 • Sweet Water Red Gambler was forced out of Golden Valley. The donkey's crime? Nocturnal braying that kept a neighbor up. Now, anyone who wants to move into this suburb near Reno is warned in advance about the smells and sounds of its chickens, goats and horses. Residents hope the disclosure will help protect their rural lifestyle.