Accessibility links
Kitchen Table Conversations The financial turmoil is hitting people at all levels of the economic spectrum. In this occasional series, NPR brings you a series of conversations with families from different backgrounds about how they are handling their money in the changing economic environment. 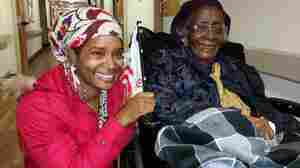 March 15, 2019 • As part of NPR's Kitchen Table Conversations, we revisit an entrepreneur in West Atlanta who wants to preserve the culinary traditions of a neighborhood even as it gentrifies and changes. 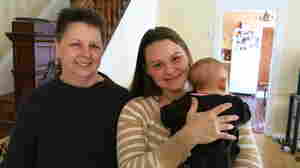 November 4, 2017 • A year after Donald Trump was elected president, Pennsylvania swing voter Jamie Ruppert worries about the future of health care and the Affordable Care Act.

November 20, 2009 • The country's spiraling unemployment rate continues to take a particular toll on men. The "he-cession," as it's sometimes called, has hit African-American men especially hard, increasing their unemployment rate to more than 17 percent last month.

Struggling To Keep Up As Credit Card Rates Rise

May 13, 2009 • As consumers like Carole Hodges struggle to get out from under a mountain of debt, credit card companies often slap them with a new interest rate that's double or triple what they were paying in the first place. Congress is working on legislation to rein in some of these practices.

Struggling To Keep Up As Credit Card Rates Rise

May 3, 2009 • A military salary has never been enough to buy into California's overpriced housing markets, but that is changing because this region has led the nation in foreclosures.

For Family, Saving Becomes A Way Of Life

March 12, 2009 • With the economy in crisis, there's growing evidence that people are making significant lifestyle changes. The Koffmans of Washington, D.C., are among families with resources who are cutting back and putting more money in the bank.

For Family, Saving Becomes A Way Of Life

In L.A., Staying Chic Without A Paycheck

March 12, 2009 • Saving money these days is not just a necessity but a virtue, even for some Los Angeles trendsetters. Since she lost her job recently, Gigi Hooghkirk has been relying on giveaways to maintain her fashionable lifestyle.

In L.A., Staying Chic Without A Paycheck

Autoworker Worries About Her Future

December 17, 2008 • Over the past several weeks, in a series of "kitchen table" conversations, American families have been talking about steering their way through economic turmoil. Now the focus is on automakers. Julie Fagel heads a family in Kokomo, Ind., that is trying to maintain a normal home life, despite financial uncertainty.

Autoworker Worries About Her Future

Facing The Downturn On A New York Farm

October 21, 2008 • Doug and Kathy Rutz live on a farm near Binghamton, N.Y. The credit crisis has them wondering if they will be able to get loans to put their children through college.

Facing The Downturn On A New York Farm

October 21, 2008 • The Sparks of Petaluma, Calif. had planned to retire to Hawaii. The couple may now have to adjust their dreams given the situation on Wall Street.

Housing Slump: A Chance To Jump Into The Market?

October 21, 2008 • Many Americans are struggling as banks hold a tighter grip on their money, making it more difficult for consumers to get all kinds of loans. But for some, falling home prices and the vast number of homes in foreclosure represent an opportunity to invest.

Housing Slump: A Chance To Jump Into The Market?

October 8, 2008 • Three weeks of financial turmoil have thrown America's economic future into doubt. But for many families, the trouble started before the banking crisis. A young Texas family says their lifestyle began to change months ago, when the price of fuel, groceries and other commodities shot up.

October 8, 2008 • The Johnsons, who make about $200,000 a year and live in an affluent suburb of Chicago, say that despite the state of the economy, they're making only small changes in their daily lives. "We're not in any panic mode," John Johnson says.

October 8, 2008 • Economic turmoil is hitting the middle class hard — especially small-business owners who can't get credit from banks they've done business with for years. That's the situation David Leschinsky finds himself in, as the owner of Eureka Puzzles, a store near Boston.