Accessibility links
Voters Talk About Race Relations In York, Pennsylvania To tackle the complexities of race deeper than the election polls, NPR hosts Michele Norris and Steve Inskeep periodically travel to York, Pa. In a series of conversations, voters — black, white and brown — discuss their experiences with race and how they will play into choices at the polls. 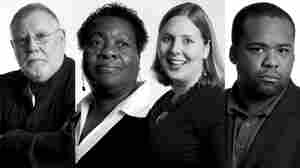 The York Project, a series of stories that aired on NPR in 2008, about race and the election. David Deal/NPR hide caption

December 14, 2016 • In 2008, NPR heard from voters in York, Pa., about race and politics during the election. This week, Morning Edition follows up with four of these voters about how their views have changed since then.

November 14, 2008 • In a diverse panel of voters, even those who voted for John McCain said they found cause for optimism in Barack Obama's victory. For some blacks in the group, the election's outcome also brought a longed-for sense of acceptance.

November 14, 2008 • In a final conversation about race and the election, a diverse group of voters in York, Pa., divulge how their views have shifted since Barack Obama's election. They also discuss questions about this new chapter in American politics.

October 30, 2008 • The conversations with voters in York, Pa., about race and the election got a lot of attention from listeners. One letter writer from Tucson, Ariz., says she wished the piece had come earlier in the campaign. A listener from Laramie, Wyo., asked, "How much did the McCain campaign pay you to air this discussion of race less than two weeks before the election?"

October 24, 2008 • Michele Norris says this election year has dredged up some very strange and potent emotions for her. It's stirred up old memories of racial tensions during her childhood in Birmingham, Ala.

Private Conversations On Race, In Public

October 24, 2008 • To probe deeper into race and its impact on the 2008 election, Michele Norris and Steve Inskeep are interviewing 15 voters from York, Pa. Inskeep has found that blacks seem to speak more comfortably about race than whites. He asks: "Whether we are white or black, do we really know ourselves?"

October 24, 2008 • In a conversation about race and the election with 15 voters from York, Pa., Michele Norris and Steve Inskeep talk about what could happen after the election. Regardless of who wins, the voters expressed fears about riots, chaos and racial distrust.

October 24, 2008 • Who is Joe Six-Pack? Is he a white guy or a brown-skinned immigrant? What does "Country First" mean? A group of 15 voters — black, white and brown — from York, Pa., help decode the language and imagery used by the campaigns.

On Race: Pushing Beyond What Is Left Unsaid

September 11, 2008 • In this election season, the media has explored the role of race in politics. In a series of discussions, Michele Norris and Steve Inskeep are interviewing 13 people from York, Pa., about their views. Norris describes the difficulties of delving into an often uncomfortable subject.

September 11, 2008 • When voters choose between McCain and Obama, how will their experiences with race affect their decisions? As a panel of 13 people from York, Pa., debated a thorny topic, a theme emerged.

The All Things Considered Conversation With York Voters

September 11, 2008 • Morning Edition and All Things Considered traveled to York, Pa., for a series of conversations with residents about race. The goal? To dig a little bit deeper than election polls about race and its role in the 2008 election.