Accessibility links
SXSW Film: 'Paul Williams Still Alive' Brings The Filmmaker Into The Picture A documentary about songwriter Paul Williams takes a turn when Williams insists on getting the filmmaker out from behind the camera. 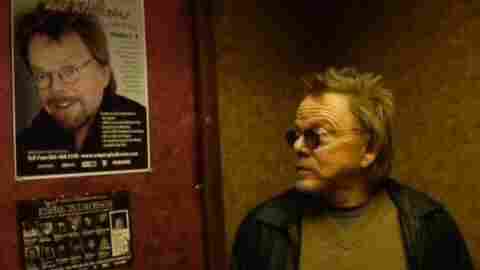 People are often a little fuzzy on exactly what Paul Williams did. Maybe they know he wrote "The Rainbow Connection," and maybe they remember that in the 1970s, he did practically every celebrity TV show from Hollywood Squares to Circus Of The Stars to, over and over and over, The Tonight Show.

But in fact, Williams was an enormously prolific and successful songwriter, responsible for a lot of the love-and-loneliness songs of that era, including "We've Only Just Begun," "Rainy Days And Mondays," and "Evergreen." He was nominated for five Oscars, and he won for "Evergreen." (But not for "The Rainbow Connection," by the way, which was nominated but lost to a song called "It Goes Like It Goes" from Norma Rae.)

The documentary Paul Williams Still Alive begins with director Stephen Kessler saying, "I always thought he died too young." Kessler was a huge fan of Williams as a kid, but thought he was dead until a few years ago, when he realized he ... wasn't. In fact, Williams is also a performer who was still performing, so Kessler went to see him, and to propose a documentary in which Kessler would follow Williams around on tour.

What follows is a buddy movie, a road movie, a nostalgic fan piece, a rumination on fame and its consequences, and a love letter to the people who love Paul Williams so much that he remains to this day their Elvis.

One of the most important moments comes when Williams addresses the behind-the-camera Kessler directly. He says that when he's just walking around being filmed, he feels like he has two choices. He's worked as an actor, so he can ignore the camera if you tell him to, but then he's acting. He's also worked as a performer, so he can play directly to the camera if you tell himto, but then he's performing. What he proposes as a solution is that Kessler enter the film himself — that they make it more of, as Williams puts it, "the Paulie and Steve Show." Once that happens, Williams is back doing what he did as a great Tonight Show guest: interacting with another person in an engaging way for the benefit of people watching. And that, Williams can do.

It's very important that this is not a real-life Spinal Tap piece about the washed-up hotels of a former legend, even though there are those moments when Kessler feels like people should be treating this legend with a little more respect. It's ultimately an upbeat story about a guy who's absolutely fine with how things turned out. Kessler proposes at one point that it seems like Williams once had everything and was miserable, and now he has much less and is happy. Williams won't even go with that theory — he says he has more now to begin with. Like many of his contemporaries, he lost a lot to substance abuse, and he does a lot of speaking about addiction and recovery. He's the president of ASCAP, the organization that manages performing rights for songwriters and composers.

Oh, and during the Q&A after the film, when someone asked what he's doing these days, Williams mentioned casually that he's been collaborating with Daft Punk.

What makes Paul Williams Still Alive successful is the relationship between Kessler and Williams. At first, the documentarian is primarily a pest, and Williams struggles with why anyone needs footage of him standing around or eating. (He really doesn't like being filmed while eating.) He never completely stops finding Kessler a pest, but as they go along — and filming went on for a couple of years — there's a sort of uneasy friendship. It culminates in a strong final act that's uncomfortable and sad, and then whomp, it ends with a surprising, satisfying moment of generosity between the men that feels entirely earned.

It's a very hard thing to do, dragging the documentarian in front of the camera. It can be effective, but very often, it makes the movie too much the filmmaker's story of making the film, which is almost always not the most interesting part of the story. But here, the interplay between the chronicler and the subject is the door through which the audience reaches the story.

This is the kind of film that screens at festivals that could remain very difficult for audiences to find, but that could also wind up with a good run on Netflix. So keep your eyes peeled over the next year or so, and perhaps you'll see it: Paul Williams Still Alive.