Accessibility links
How To Introduce Kids To Tough Topics? Art And TV Can Help When parents aren't sure how to approach a difficult subject, they sometimes turn to other media — and Linda Ellerbee is happy to lend a hand. She's been the host of Nickelodeon's NickNews for 22 years, and her one rule of thumb is don't dumb it down. 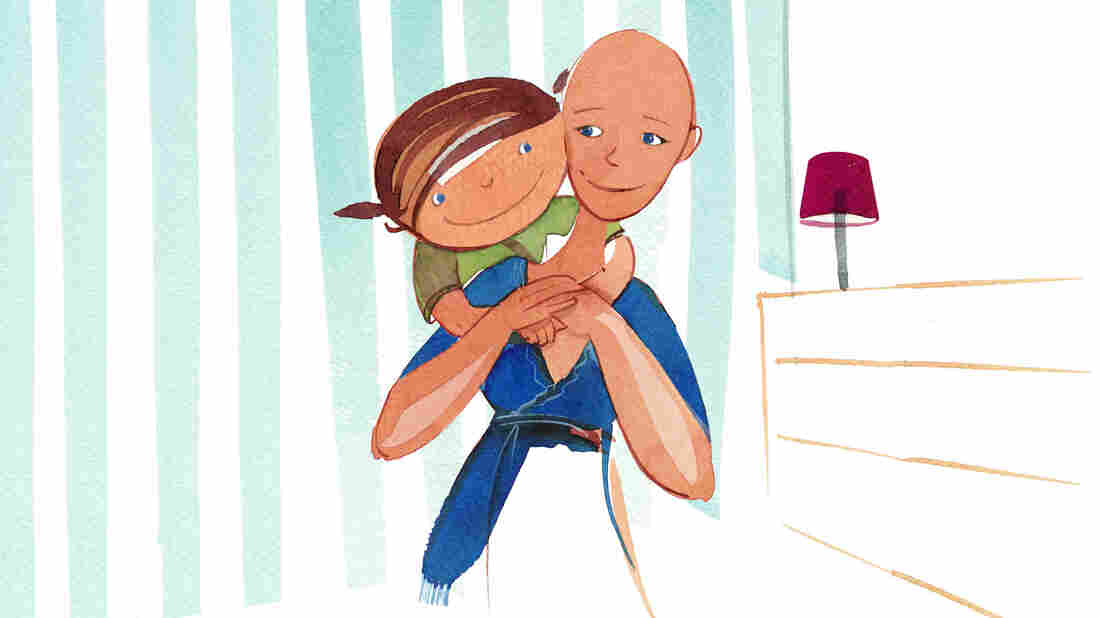 Sue Glader wrote Nowhere Hair after finding that many children's books about cancer were too depressing or scary. Courtesy Sue Glader hide caption 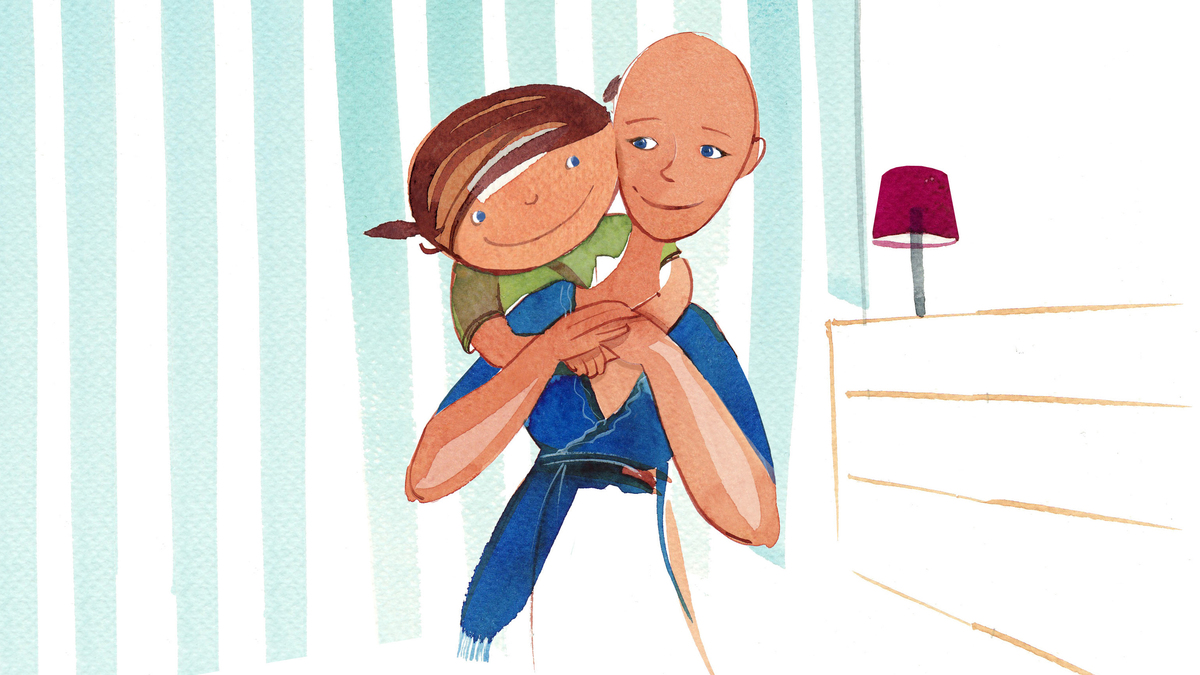 Sue Glader wrote Nowhere Hair after finding that many children's books about cancer were too depressing or scary.

Parents steer their kids to media for all kinds of things: as a distraction so they can make dinner, to teach letters and numbers, and for pure entertainment. There are also times when parents rely on books, TV, museums and other media when they aren't quite sure how to approach a difficult topic by themselves.

Linda Ellerbee is the queen of hard subjects. Domestic abuse, Sept. 11, alcoholism and living with HIV are among the many tough issues she's covered in the 22 years since she's hosted NickNews on Nickelodeon. The show is written for 9- to 13-year-olds, and Ellerbee says her one rule of thumb is don't dumb it down.

"Our viewers are smart people," she says. "They are merely younger, less experienced and shorter." They also possess a more limited vocabulary, but Ellerbee she still uses words they might not know, like "intervention" or "hijacking."

NickNews is also known for letting kids do the talking: Children who've experienced all kinds of difficulties go on air to explain what their lives are like and how they're coping. Ellerbee says it's an effective way to explain a hard subject to young people. But, she cautions, don't do it too soon.

"That's why we haven't gone to Newtown yet to do a show with those kids or, you know, about what happened," she says. "It's about timing. You need to sort of let some things settle."

For the producers of Glee, meanwhile, the right time was four months after Newtown. Last April, the Fox series did an episode in which the high school goes on lockdown when a student's gun goes off. Some Newtown, Conn., residents urged people in the community to boycott the show.

The way adolescent brain works is such that 'bad things happen to other people' ... So what I think ['Glee'] did was to strike empathy and understanding amongst that age group.

Psychologist Jennifer Powell-Lunder says the dangers of that Glee episode vary depending of who's watching it. "It is not a good show for kids who've been through such a trauma to be viewing," she says. "And it's very simple: Because it's too close to home, it retraumatizes them."

For teenagers who haven't experienced a similar tragedy, Powell-Lunder says, the episode was well done. "Really, the way the adolescent brain works is such that bad things happen to other people," she says. "So what I think it did is strike empathy and understanding amongst that age group and amongst all of us about the fear and the terror of the unknown."

The Right Book For Rough Subjects

In the late 1980s psychologist Jerome Singer warned, "Television is like having a stranger in the house." Most parents wouldn't want their children learning about the dangers of the world from a stranger, and that includes TV, he said when he was at Yale. At the same time, some parents need help starting the conversation. For young children, the right book can help, especially since reading together naturally lends itself to conversation. 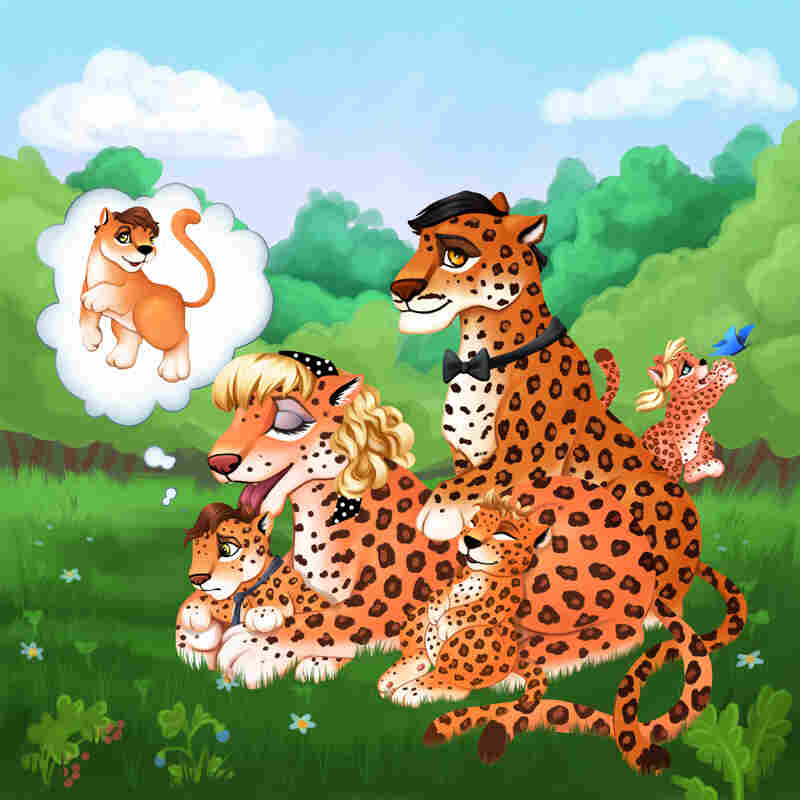 In When Leonard Lost His Spots, Leonard transitions from leopard to lioness. Here, Leonard is shown as a cub, dreaming of life without spots. Courtesy Happy Family! hide caption 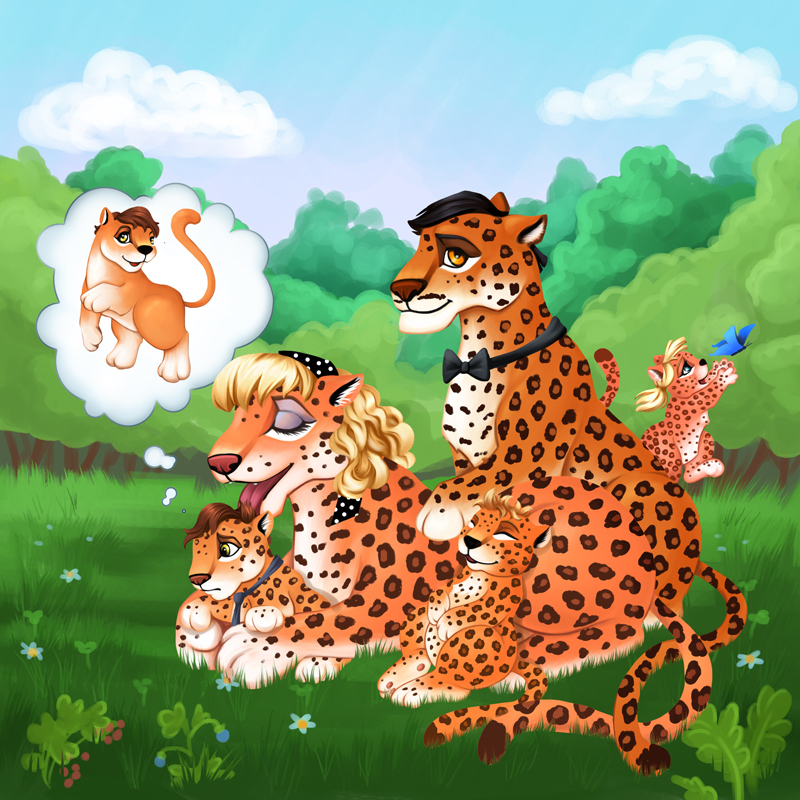 In When Leonard Lost His Spots, Leonard transitions from leopard to lioness. Here, Leonard is shown as a cub, dreaming of life without spots.

Case in point: The picture book When Leonard Lost His Spots: A Trans Parent Tail by Monique Costa addresses an issue you rarely find in children's literature — transgender. With playful rhymes and Disney-like illustrations, a tiger cub tells how he feels about his father becoming a female:

"I didn't know how to react.
Or even what to say.
I pretended not to notice him.
I wish he'd go away."

The cub feels shame, anger and fear. That openness is something publishers Cheril Clarke and Monica Bey-Clarke were drawn to. Their company, My Family!, focuses on children's books about nontraditional families. "It doesn't shy away from the fact that [the] cub is struggling inside," Clarke says. "It's a very honest story from a child's point of view."

But if a book for small children is too depressing, some adults just won't buy it. When Sue Glader was diagnosed with breast cancer, she went looking for books to read to her nieces and nephews. "I saw a lot of things that were really very sad and very scary or supertechnical for a young child," she says. So when she was going through chemotherapy, she wrote the book Nowhere Hair:

"A sparrow might have borrowed it to warm her fancy nest.
Perhaps she stuffed a pillow to help grandma get some rest.
The day I asked her where it went
She had a simple answer
'I'm bald because of medicine
I take to cure my cancer."

Glader's advice for talking to kids about hard subjects is be "silly ... in the right places."

As hard as it might be to talk to a child about cancer, it's still a relatively concrete and present subject. Talking about difficult issues in the news is a different challenge. When it's the so-called "crime of crimes," many adults would rather not think about it at all, let alone talk about it with kids.

Artist and activist Naomi Natale is trying to get young people, as well as grown-ups, to understand genocide with a project called One Million Bones.

Pre-K through 12th-grade students at several hundred schools around the country have been sculpting human bones out of clay for a mass grave to be displayed on the National Mall to honor the victims of genocide.

At Georgetown Day Middle School in Washington, D.C., 12-year-old Cole Wright-Schaner made a spine. "It was kind of disturbing to make it, thinking of all the people that have died in the African countries," he says. "It really opened my eyes to genocide and what's going on in the world. We live in such a safe country."

Natale says the simple, physical process of making a bone is what makes genocide personal. "If you can think about the bone that's in your hand, and that you're using your hands to craft another bone, you know — representative of our lives and evidence we existed," she says. 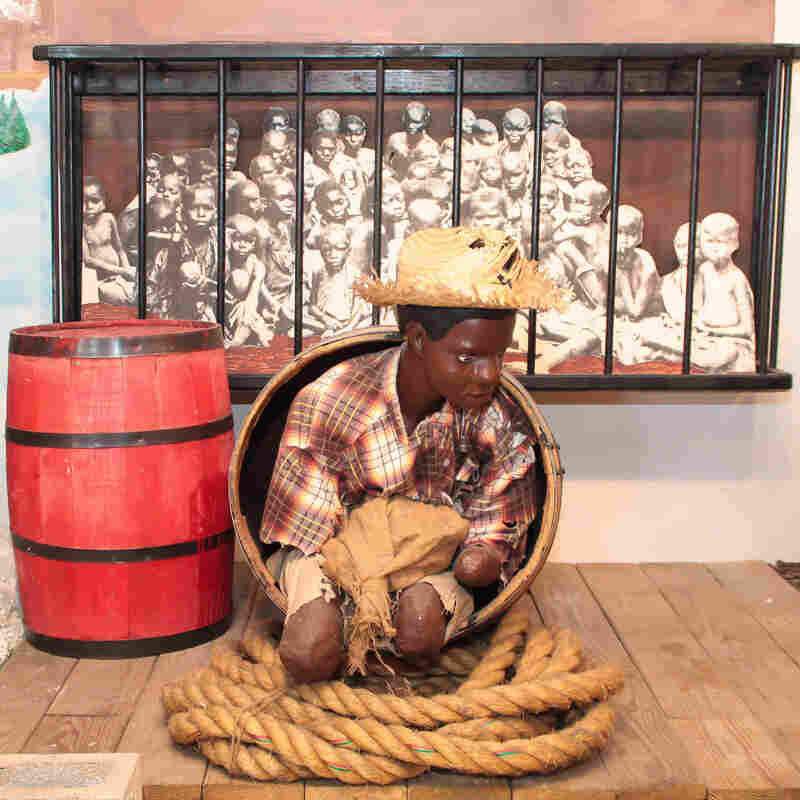 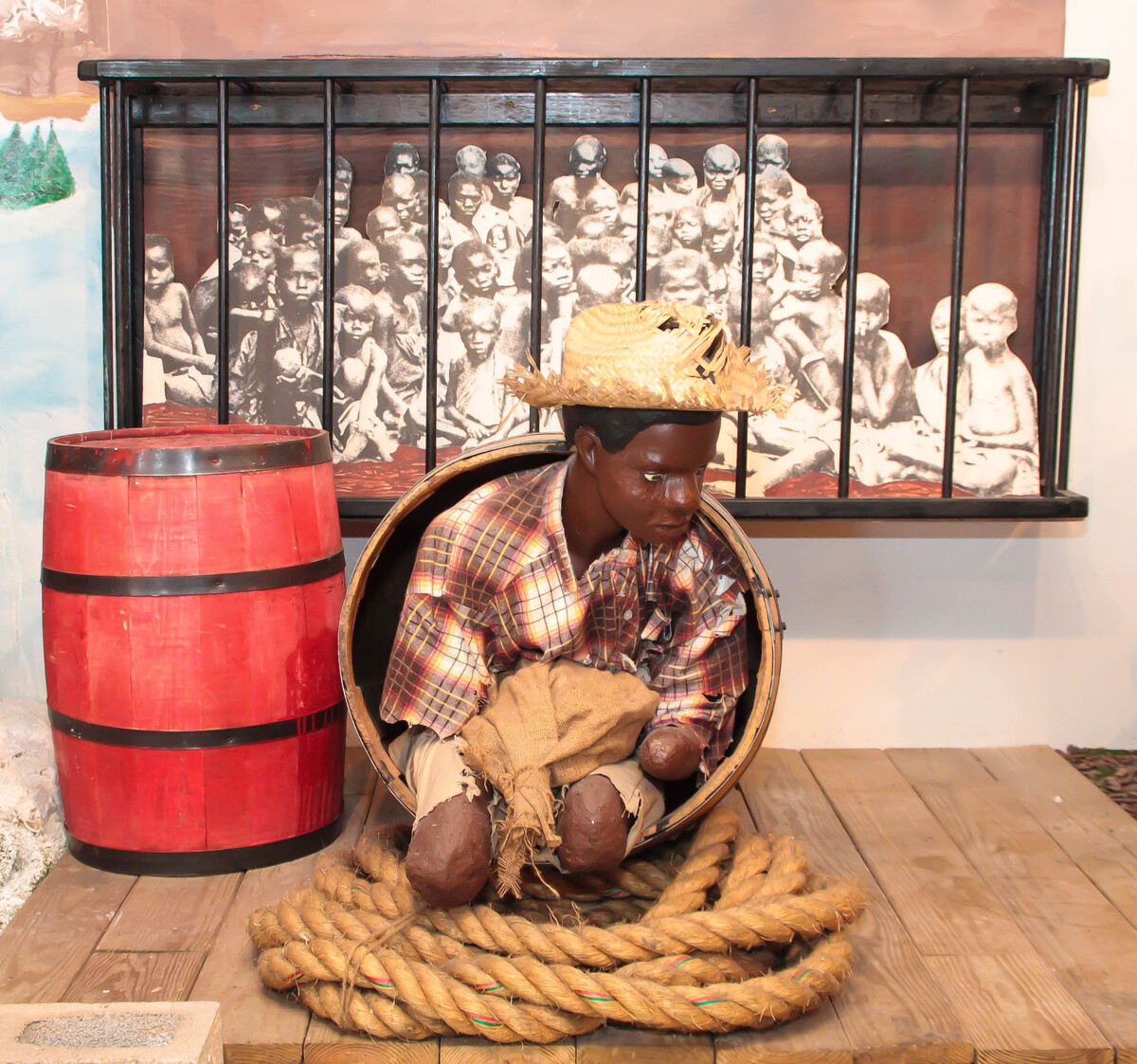 And young people can comprehend a difficult subject better by seeing it or touching it. At the National Great Blacks in Wax Museum in Baltimore, they get to do both.

Joanne Martin founded the museum with her late husband, Elmer Martin. They assembled an exhibition on slavery that is both extraordinary and grim: The museum has actual slave chains and shackles that visitors can hold. The weight alone drives home the brutality of slavery.

There's also a replica of a slave ship. Narrow, creaky steps take visitors down below. It's dark and there are life-sized statues of men, women and children with chains and shackles around their legs and their necks.

On a recent trip to the museum, fifth-grade teacher Damien Samuels said his students from KIPP Middle School in Charlotte, N.C., were "significantly affected" by the slave ship. He says teaching the complete story of slavery is challenging. It's easy to find stories about escaping slavery and abolitionists but most media skirt the really difficult parts.

"Even the textbooks shy away from certain images," Samuels says. "I think this museum does a very good job at showing the graphic details. So I think this is a very, very good opportunity for [the students] to really, really appreciate what their ancestors have been through."

The Great Blacks in Wax Museum also includes many stories that celebrate African-Americans' achievements over the decades, from civil rights to space exploration to the White House. Leaving young people with a sense of hope is important whenever media tackle hard subjects, says Nickelodeon's Linda Ellerbee.

"Wherever bad things happen, you always find good people trying to make it better," she says. "And there are more good people than there are bad people."