Accessibility links
An 'Adventure' For Kids And Maybe For Their Parents, Too Adventure Time isn't your typical cartoon, but it's capturing an audience of kids and adults who believe it's getting at something special. 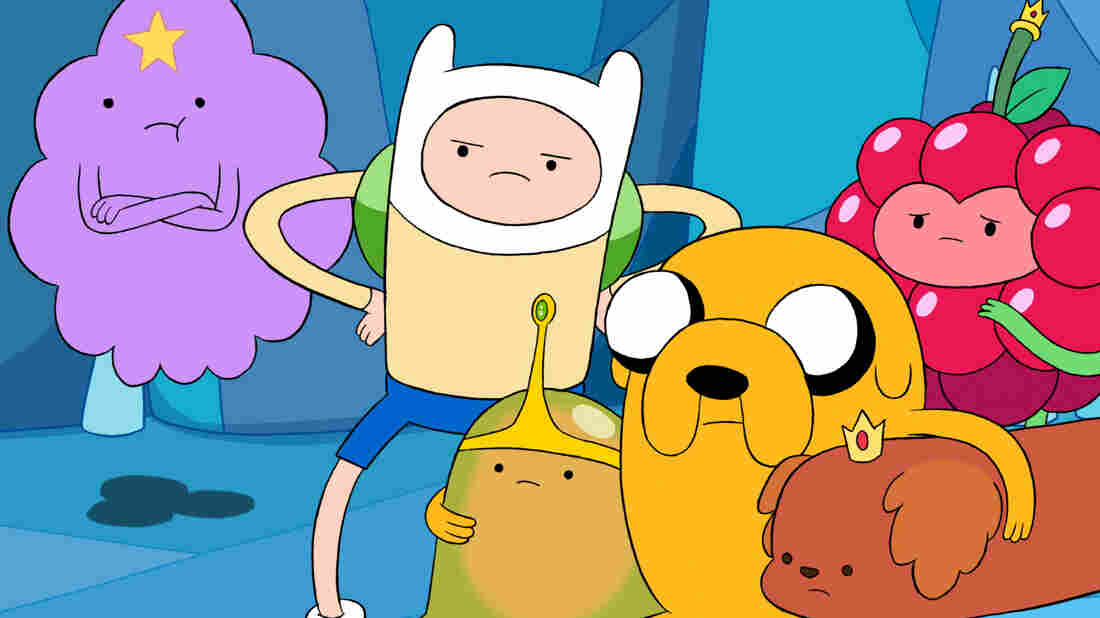 Finn is in the middle, with the skinny arms. Jake is the dog. Together, they have Adventure Time. Cartoon Network hide caption 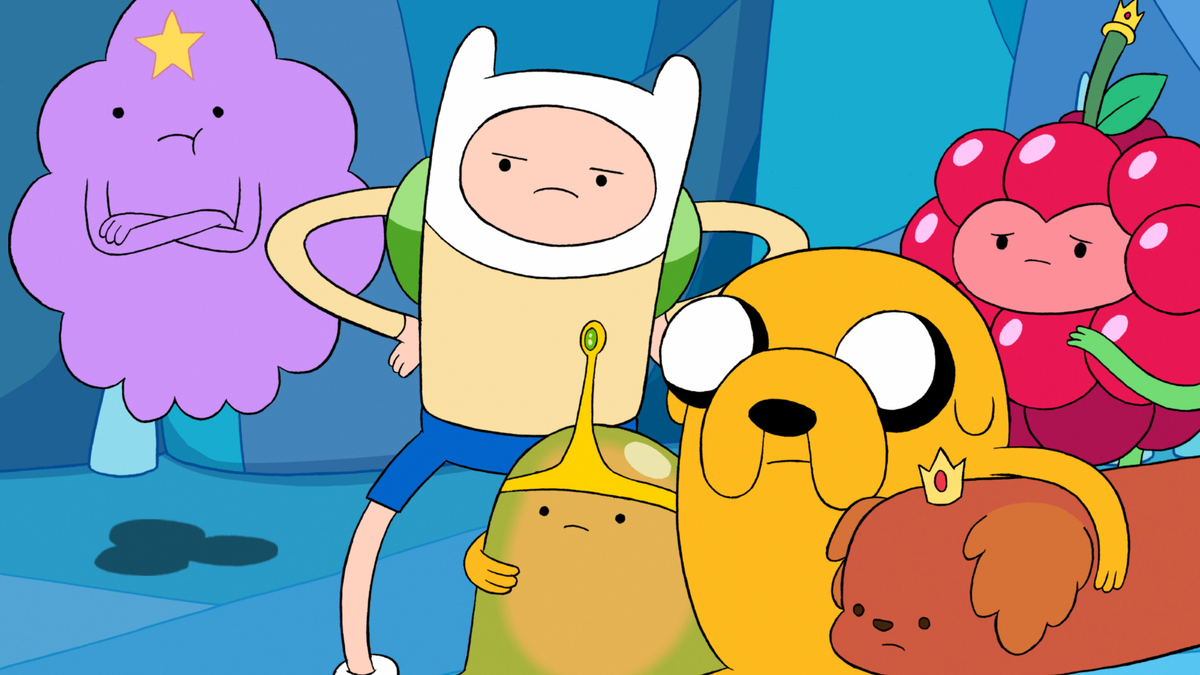 Finn is in the middle, with the skinny arms. Jake is the dog. Together, they have Adventure Time.

Count plenty of grown-ups among the millions of fans of Adventure Time, a kids' show on Cartoon Network. Some are surely Emmy voters. (It's won three.) Others are very possibly stoners. Still others are intellectuals. Lev Grossman falls in the last category. He wrote two best-selling novels, The Magicians and The Magician King, and he's Time's senior book critic.

Hang on. He's just getting started.

"I am a little bit obsessed with it," Grossman continues. "It's rich and complicated the way Balzac's work is, which is a funny thing to say about a cartoon."

For the uninitiated, Adventure Time is set in a surreally pastel post-apocalyptic kingdom crawling with mutated candy creatures, bizarre princesses — think Slime Princess and Lumpy Space Princess — and our two heroes. They're Finn and Jake, a gangly human boy and his moon-eyed yellow dog.

The show's creator, Pendleton Ward, modeled Jake partly after Bill Murray's sardonic camp counselor in the 1979 movie Meatballs, a cooler-than-cool older-brother figure who can laugh at his charges without being mean and whose teachable moments are anything but cloying.

"Jake sees his own death in one episode," says Ward. "And Finn has to deal with that. Jake's a hip guy. He can watch his own death, and he's comfortable with it, and that's a weird thing, especially for Finn, who's superyoung, and it's really hard on him."

In the episode, called "New Frontier," Jake experiences a vision during which he's taken to an afterlife of stars and darkness by a little bananalike creature (voiced by Weird Al Yankovic).

"When I die, I'm gonna be all around you," Jake reassures Finn. "In your nose. And your dreams. And socks! I'll be a part of you in your earth mind. It's gonna be great!"

"That episode was really tough to tackle, writing it for a children's television show," Ward remembers. "It was hard for us to really not make it so sad and scary that you feel really sad and scared watching it."

Adventure Time insists on emotional honesty — even in its bad guys, usually depicted as cardboard villains in kids' cartoons.

Or take the buffoonish, bandy-legged and morally compromised Ice King. "[He's] psychologically plausible," Grossman observes. "He's an old lecherous man who has a magical crown. It's made him into this strange, awful individual who goes around capturing princesses."

The king's crown wiped his mind and warped his body. He'll die if he takes it off.

"Which is this rather moving tension, and he doesn't remember who he used to be, but other people do," Grossman says. "It's very affecting. My dad has been going through having Alzheimer's, and he's forgotten so much about who he used to be. And I look at him and think this cartoon is about my father dying."

In spite of the critical admiration, the warm feelings of fans and the prestigious awards, Adventure Time nearly never aired. "It actually felt like a great risk," says Rob Sorcher, the Cartoon Network's chief content officer. "It's not slick. It doesn't feel manufactured for kids, so who's it for?"

Um, perhaps partly for the kind of grown-up who might watch Yo Gabba Gabba with a little chemical assist?

"For me, it doesn't come from that place," says Ward. "For me, it comes from my childhood, wandering in my mind. You can't really go anywhere when you're a kid. I don't have a car, I don't have anything. I just have my backyard and my brain. And that's where I'm coming from when I'm writing it." He pauses. "I can't speak for all the writers on the show."

Ward and his mother used to watch cartoons together when he was a kid, but he claims today he's not writing specifically for a co-viewing audience of parents and kids. Still, author Grossman says Adventure Time works for him and his 8-year-old daughter, Lily, equally.

"It's really important for us to have something we can enjoy together and talk about together. It gives us in some ways a common language for talking about more important issues," he says.

Adventure Time's world used to be our world. Then it was destroyed by a war. It's strewn with detritus such as old computers, VHS tapes and video games from the 1980s.

"It takes my childhood, the shattered pieces of it, and builds it into something new, which is now part of Lily's childhood," he says, almost in wonder.