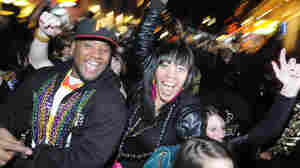 February 8, 2010 • In New Orleans, it's a holiday of sorts after the Saints' come-from-behind victory in the Super Bowl on Sunday night in Miami. New Orleans beat Indianapolis 31-17, setting off a celebration in the streets. Some residents see the win as a sign of the city's rebirth after Hurricane Katrina, which devastated parts of the city.

February 8, 2010 • The New Orleans Saints are the champions of the National Football League. The Saints beat the favored Colts by two touchdowns, 31-17 in Miami, to win their first championship. Saints quarterback Dree Brees tied a Super Bowl record for completions and was voted the game's MVP. 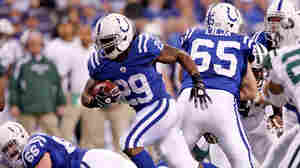 February 7, 2010 • One thing football fans hear over and over again is that a team must run in order to be successful. You can't win in the NFL without a ground game, TV experts still say. But that doesn't seem to be the case in the Super Bowl, and it doesn't seem to be the case overall in the NFL. Running, as a means to victory, is under aerial assault from the passing game.

February 5, 2010 • Can a football team breathe life into a city? Saints fans think so. For many, their team's long climb to the Super Bowl is symbolic of New Orleans' ongoing struggle to recover from Hurricane Katrina. 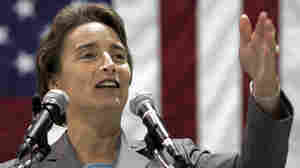 Sen. Blanche Lincoln of Arkansas speaks during a January 2009 aviation industry forum in Little Rock, Ark. Lincoln might be facing the toughest U.S. Senate race for a Democrat this year — which will be even tougher if her opposition receives generous donations from corporations per the recent Supreme Court ruling. Danny Johnston/AP hide caption

February 5, 2010 • Last month, the Supreme Court handed corporations a new way to spend their funds — on ads advocating for or against political candidates. So what could corporations get if they put money into a campaign instead of buying a $2.5 million Super Bowl ad? Experts say that kind of money could cover enough ads to sway some House and Senate races.

February 5, 2010 • The New Orleans Saints play the Indianapolis Colts on Sunday in the Super Bowl XLVI. Despite the hoopla surrounding the clash, the players say they remain focused on the game. Still, it's not easy for players to remain focused. 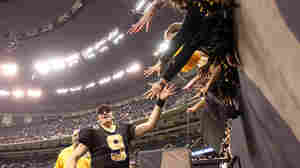 Drew Brees of the New Orleans Saints celebrates with fans after defeating the Minnesota Vikings to win the NFC Championship Game at the Louisiana Superdome. Ronald Martinez/Getty Images hide caption

February 5, 2010 • Having a tough time trying to figure out the football part of the Super Bowl? These Super Bowl conversation starters can help you wage a good offensive game on Sunday.

Super Bowl Ads: What To Watch For Between Plays

February 5, 2010 • This weekend, more than 100 million people will gather around their televisions to watch the New Orleans Saints take on the Indianapolis Colts in Super Bowl XLIV. But that's only part of the entertainment: The commercials often draw more Monday morning quarterbacking than the game itself. Linda Wertheimer talks with author and former ad man James Othmer about what will play between the plays Sunday.

Super Bowl Ads: What To Watch For Between Plays 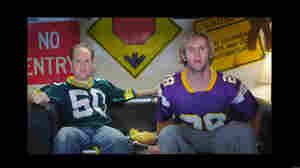 February 4, 2010 • Last week, CBS turned down a commercial produced by a new gay dating site called ManCrunch.com. The ad raises questions about not just what networks want in Super Bowl advertisements, but what potential advertisers really want from the Super Bowl. 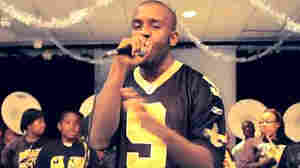 K. Gates, here in a still from the video for "Black & Gold (Who Dat!!)," also goes by the name The New Orleans Savoir. courtesy of the artist hide caption

February 4, 2010 • When the Saints captured the NFC Championship two weeks ago, music roared from every neighborhood and spontaneous brass-band parades shut down streets: New Orleans rhythms exploded across the city in a way that seemed natural for celebrations of football glory. Now, you can hear 10 songs which typify the music in the New Orleans air right now.

February 4, 2010 • During his nine years as the coach of the Baltimore Ravens, Brian Billick led the team to a Super Bowl win in 2001. Now a commentator for Fox Sports and the NFL Network, he joins Fresh Air to discuss the upcoming Super Bowl — and the future of the NFL.

February 4, 2010 • Football fans are looking forward to this Sunday's Super Bowl –- and a day full of good food. But the menu doesn't have to be limited to pizza and nachos. We asked two chefs from the Colts' and Saints' hometowns about what they'd be cooking this weekend. 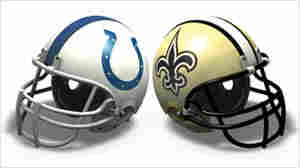 February 3, 2010 • See how the New Orleans Saints and Indianapolis Colts match up in the NFL title game. AP writer Barry Wilner gives a preview of the game, along with a breakdown of key players and team statistics.

February 3, 2010 • The party has started in New Orleans for the Saints' first-ever Super Bowl. Earlier this week, a bunch of men paraded around the French Quarter in ballgowns, including former quarterback Bobby Hebert. It was a memorial to Saints announcer Buddy Diliberto — who promised to walk Bourbon Street in a dress if the Saints got to the big game. Buddy D died five years ago.

Getting Set For The Super Bowl In Miami

February 3, 2010 • There are just four days left until the Indianapolis Colts face the New Orleans Saints in Super Bowl XLIV in Miami. News leading up to the big game includes developments with some of the top players: Colts defensive end Dwight Freeney and quarterback Peyton Manning.

Getting Set For The Super Bowl In Miami